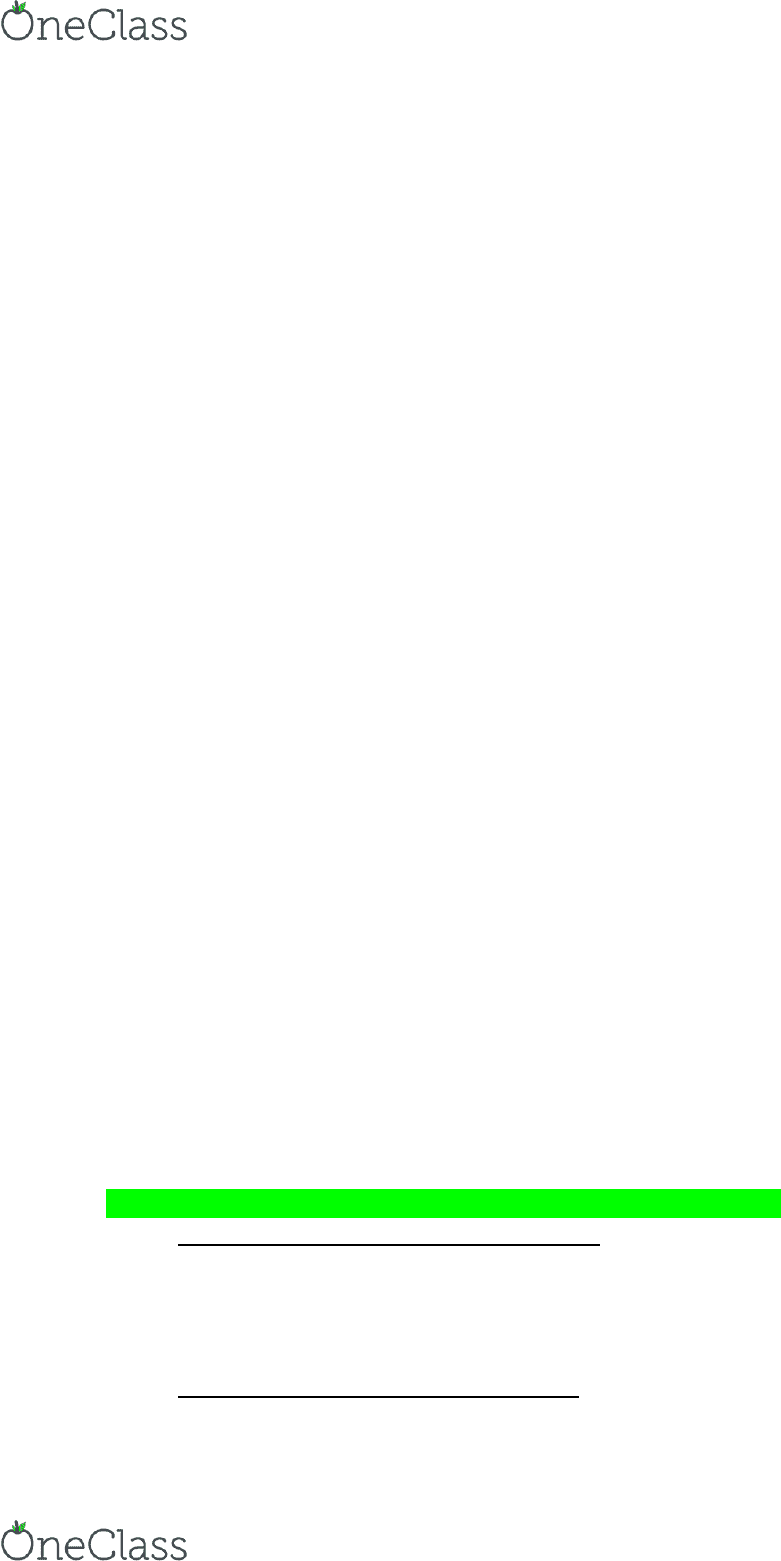 Psych 2075 Human Sexuality
Chapter 14: Sexual Orientation
Beginning of Gay liberation – fight in June 1969 in the Stonewall, a gay bar in NYC’s
Greenwich village
First gay liberation group in Canada was formed in Vancouver 1970
Distinctions: Sex (sexual behavior), gender (male/female), gender identity (sense of
maleness/femaleness), sexual orientation (heterosexual, gay, bisexual, or asexual)
Sexual Identity – heterosexual, gay, lesbian, bisexual, asexual, etc.
oThere may be contradictions between people’s sexual identity and their actual
choice of sexual partners
oI.e., a woman may identity herself as a lesbian yet occasionally have sex with
men
oHer choice of sexual partners is bisexual, but her identity is a lesbian
Sexual Orientation – who we are emotionally, romantically, and sexually attracted to
oHomosexual – sexual orientation is toward members of same gender
oHeterosexual – attraction towards opposite gender
oBisexual – sexual orientation towards both genders
oAsexual – no sexual orientation towards men or females
Use of the term homosexual to refer to lesbians and gay men is problematic for three
main reasons:
oIn the past it has been associated with negative stereotypes – i.e., deviance,
mental illness, criminal behavior – derogatory label
oEmphasizes sexual behavior rather than sexual identity
oIt is ambiguous because even though it is a general term, it has been used to
refer exclusively to gay men
Queer – a term that encompasses gay men, lesbians, and transgender persons – all
people who identify as outside the social norm with respect to gender and/or sexuality
oUmbrella term
Pansexual – open to relationships with people of any sex, gender, or gender-identity
(i.e., men, women, transgender, intersex)
Sexual Minority – all people who don’t identify as heterosexual, regardless of specific
identity
HOW MANY PEOPLE ARE GAY, LESBIAN, BI, STRAIGHT, or ASEXUAL?
Canadian Community Health Survey (CCHS)
oMen: 1.4% homosexual, 0.7% bisexual
oWomen: 0.8% homosexual, 0.9% homosexual
Women more likely to report changes in their pattern of attraction than men were –
men also report changes in their attractions
National Survey of Family Growth (NSFG)
find more resources at oneclass.com
find more resources at oneclass.com
Unlock document

o5% men, 12% women had had at least one same-sex sexual experience in
adulthood
o4% men AND women experience sexual attraction to members of own sex
o2% men, 1% women have a gay identity
Ways of conceptualizing homosexuality and heterosexuality:
oTypological Conceptualization – homosexual and heterosexual are two separate
and distinct categories
oKinsey decided to conceptualize mixed-sex and same-sex behavior not as two
separate categories but as variations on a continuum
oScale:
0 – exclusively heterosexual experience
3 – equal amounts of hetero and homosexual experience
6 – exclusively homosexual experience
The scale only refers to behavior and not to attraction
oTwo-Dimensional Scheme
One scale for heteroeroticism (extent of one’s attraction to members of
the other gender) ranging from low to high
One scale for homoeroticism (extent of attraction to members of one’s
own gender) ranging from low to high
I.e., high on both heter- and homoeroticism = bisexual
High on heteroeroticism and low on homoeroticism =
heterosexual
High on homoertocism, low on heteroeroticism = gay
Low on both = asexual
Asexual individuals define asexuality in terms of lack of attraction to men and women,
not in terms of behavior or desire
In General:
o~90% of men and women are exclusively hetero
o~10% of men/women have had at least one same-sexual experience in
adulthood
o~2% men, ~1% women identify as gay
ATTITUDES
Stereotypes and negative attitudes lead to discrimination and hate crimes against gay
men and lesbians
Attitudes Toward Gay Men and Lesbians
~80% of Canadians say that society should accept gays and lesbians
Canadians are more accepting of same-sex relationships than Americans are
oOnly 60% of Americans say they accept gays and lesbians
oUK is same as Canadians
Homophobia – fear of gay individuals; fixed attitudes and reactions to gay men and
lesbians
find more resources at oneclass.com
find more resources at oneclass.com
Unlock document

Homonegativity – negative attitudes and behaviors toward gay and lesbians; sometimes
call antigay prejudice, sexual prejudice, heterosexism, or heterocentrism
oTraditional – based on moral and religious views or beliefs that homosexuality is
not normal
oModern – beliefs that gays and lesbians exaggerate the importance of their
sexual orientation or make unnecessary demands for social change
Heterosexism – the belief that heterosexual is “normal” and is the only legitimate,
acceptable, and healthy way for people to be; gay people and behaviors are denigrated
Heteronormativity – the belief that heterosexuality is the norm
Media and LGB Attitudes
oIn the past there were no portrayals of gays or lesbian in the media – now there
are more representations of sexual minorities in the media
oSome programs may increase stereotypes because they present the characters in
stereotypic ways (i.e., lacking a stable relationship, being preoccupied with
sexuality, and laughable)
oSome are positive by challenging stereotypes – use humor to expose and
challenge stereotypes
oReading popular magazines associated with more positive attitudes toward LGBs
oReading teen magazines associated with less positive attitudes because they
tend to be conservative about sexuality
Consequences of Homonegativity and Heterosexism
oInternalized Homonegativity – some LGB youth adopt the negative attitudes
they see around them – may make it difficult for them to accept their own sexual
orientation
oMost extreme expressions of antigay prejudice occur in hate crimes against
LGBs.
oThe rates of transphobia were highest for trans youth
oSexual minority youth are more likely than their heterosexual counterparts to
experience physical and sexual victimization, verbal harassment and
discrimination
Attitudes Toward Bisexuals
Bisexuals experience a different kind of stigma than gay men and lesbians
Stereotypes:
oBisexuals are thought as internally conflicted or psychologically immature
oNonmonogamous, needing both same-sex and other-sex partners to satisfy both
the gay/lesbian and heterosexual sides of their sexualities
Bisexuals may be viewed with suspicion or hostility by the gam and lesbian communities
Bisexual women who are involved in lesbian communities are told they were really
lesbians who have not yet realized it yet
Bisexuality is sometimes seen as fence-sitting – a way to get the best of both worlds
without having to commit to a particular identity
Advantages:
oAllows more variety in one’s sexual and human relationships
find more resources at oneclass.com
find more resources at oneclass.com
Unlock document