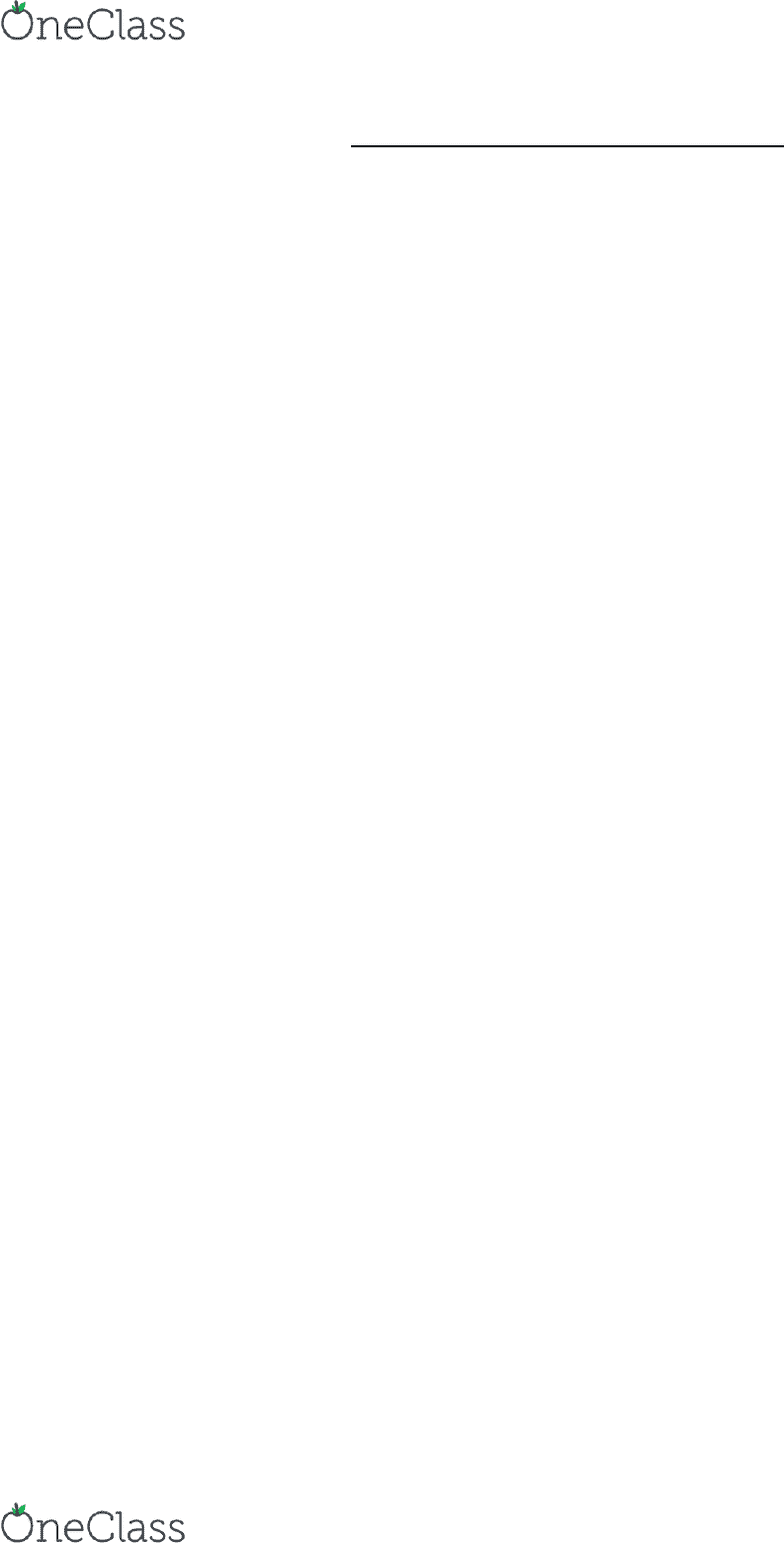 Chapter 11 - Contemporary Feminist Theories
INTRODUCTION:
Feminist theories consist of generalized and wide-ranging system of ideas about social life and human
experience that has been developed from a women centered perspective. Feminist theories are women
centered in 2 ways:
1. It is the starting point of all its investigations of the experiences of women in society
2. Seeks to describe and evaluate the world from the vantage points of women
It is known in the realm of sociology that many women have played a number of roles that are very different
from the popular conception of them (ex. seen as passive housewives and mothers). This is due to the
concept and development of gender. In the early 1970s, feminists made it possible to see the distinctions
between biologically determined attributes that are associated with males and females and the socially
learned behaviours associated with masculinity and femininity. It is crucial to understand that gender is a
social construction – something that did not come from nature but created by people as part of the processes
of group life.
For feminists to change to way of modern social life, there must be a commitment to social transformation in
the interest of justice. There are a number of differences among women, which can be recognized by:
invisibility, inequality, and role differences in relation to men which are affected by a woman’s race, class,
age, sexual preference, marital status etc.
THE BASIC THEORETICAL QUESTIONS:
Contemporary feminist sociology has its historical roots in the work of earlier generations of women
theorists, who in the early nineteenth and twentieth centuries made important contributions to the
formulation of sociological theory. However many of these accomplishments by women were erased
due to gender inequality. The waves of collective mobilization contributed to the increase of women in
the sociological field. Contemporary feminist theory (classic roots), centered in on the women’s
struggle for the vote and for admission to the political process (1848-1920). Contemporary feminist
theory began with second wave activism (1960-1990), which worked to translate basic political rights
into tangible economic and social equality with men and is continued into third wave activism (1990
– present).
THE CLASSICAL ROOTS:
1. First they practice a critical rather than descriptive or explanatory analysis. Claim that the purpose of
sociology is social improvement and that the main problem to be improved is social inequality
find more resources at oneclass.com
find more resources at oneclass.com

2. They emphasize that women’s experience and women’s lives and works as being equal in importance
to men’s.
3. Conscious awareness that they – like all people – speak from the situated and embodied standpoint
4. Concerned with domination as the main practice which inequality stems from
 Domination is the power relation in which the superordinate makes the subordinate an instrument of
his will, denying the subordinate’s individual capacity for though
 Harriet Martineau: (1802-1876)
 She received good education for people of her time because of the family’s religious principles which
emphasized human reason as the way to transcendental experience
 She turned to writing as the way to live her life
 With the publication of Illustrations of Political Economy she became a popular name in England,
which was composed of a series of novels designed to teach the general public the principles of what
was then economics.
 She turned to sociology (a new science) where she felt that she would be able to view society in the
making
 In 1835 she drafted the first methods text in sociology, How to Observe Morals and Manners.
 In 1853 she published her translation, which reorganized Auguste Comte’s six volume Positive
Philosophy, a version that Comte liked so much that he had it retranslated into French, where it
became a standard version.
 Martineau is now being studied for her original work of the 1830s and is recognized as being (along
with Comte) as one of the inventors of sociology.
 Deaf from her early teen years she was the first sociologist to write about illness and disability.
 Judith Lorber:
Is a sociologist who looks at theories that (1) aim to “reform” the gender system, by equalizing the
opportunities for men and women, (2) theories that aim to “resist” the gender system by promoting the
value of women’s ways of being and (3) theories that “rebel” against the gender system by challenging
the existence of gender itself.
GENDER DIFFERENCE
This is seen when a woman’s experience is different in most situations from those of men in the same
situation. Gender difference theories can be described by the ways that men and women are or are not
the same in behaviour and experience. Theories regarding gender differences have to confront the
problem of the essentialist argument – meaning that the fundamental differences between men and
find more resources at oneclass.com
find more resources at oneclass.com

women are given and cannot be changed. This can be understood by three factors: biology, the needs
of social institutions for men and women to preform different roles and the mental need humans have
to think in terms of “otherness” as a part of defining the self.
 Cultural feminism: a theory that explores and celebrates the social value of women’s distinctive ways of
being (they have a DUTY)
 This feminism allows for the positive qualities of what it defines as the “female character” or
“personality”. Popular feminist theorists argued that the governing of society needed women’s virtues
like cooperation and nonviolence in the settling of disputes
 This explores the traditional motherly and feminine role that sets distinctive standards around the
different communications styles that women express over men
 Suggest that women’s way of being may be a better template for producing a society that is not
androcentric (male centered)
 Existential or phenomenological feminism: a theory of difference that sees people born into a world
shaped by culture that reflects male experience and ignores women’s experience.
 Women are marginalized as the “other” in a male dominant culture
 Binary opposition (either male or female)
 She is passive, he is aggressive etc.
 This causes them to internalize this otherness so that they do not experience themselves as actors in the
world but objects that wait for men to desire them
 Feminist Institutional Theory: Sees gender differences as resulting from the different roles those
women and men play within various social institutions
 Major source of this differentiation is seen in the sexual division of labour of the family
 Links women to the functions of wife, mother and household worker (to the private sphere of the
home and family)
 Feminist Interactionist: theory that views gender as an accomplishment by skilled actors in interaction
with others who hold them accountable for conforming to appropriate gender behaviour
 Order, culture and stratification are maintained through individuals through interaction
 Example: when a baby is born, it is assigned a sex category and “does gender” – acting in ways that
are appropriate to the sex category
 Gender is constantly being applied to people through the process of interaction
 The aspect of gender is conceived by an understanding of man and woman depending on personal
biographies and their locations in history
 Everyone has a rational self – there is another force behind what people choose to do
 When a major infusion of women’s ways becomes part of public life, the world will become a safer
place for us all
find more resources at oneclass.com
find more resources at oneclass.com