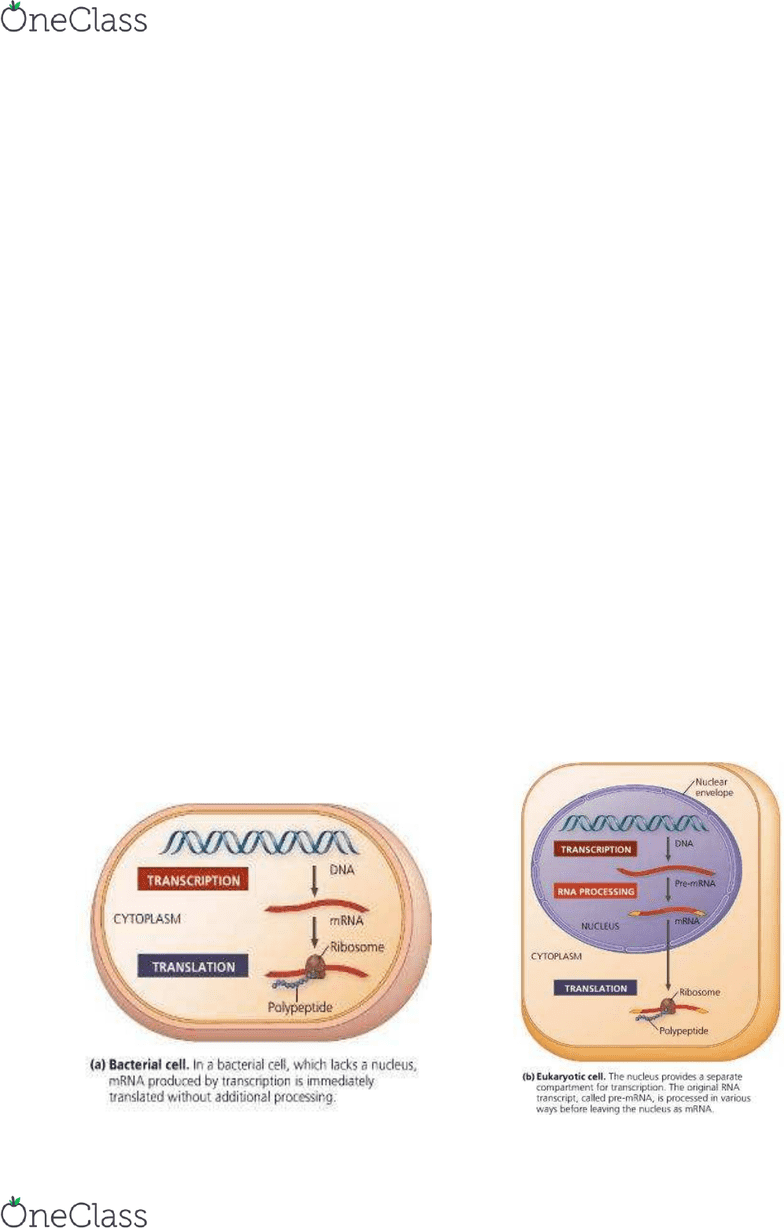 Samuel Mohebban Chapter 17 Notes Exam 2
1
 Gene expression is the process by which DNA directs the synthesis of proteins
o 2 stages
 1) Transcription
 2) Translation
 A eukaryotic gene can code for a set of closely related polypeptides via a process called
alternative splicing.
 The bridge between DNA and protein synthesis is the nucleic acid RNA.
 RNA contains ribose instead of deoxyribose as its sugar and has the nitrogenous base
uracil rather than thymine, and is usually single stranded.
 Transcription is the synthesis of RNA using information in the DNA.
o DNA strand acts as a template for assembling a complementary sequence of RNA
nucleotides.
 Messenger RNA (mRNA)- carries a genetic message from the DNA to
the protein-synthesizing machinery of the cell.
 Translation is the synthesis of a polypeptide using the information in the mRNA.
o The cell must translate the nucleotide sequence of an mRNA molecule into the
amino acid sequence of a polypeptide.
o The sites of translation are ribosomes- molecular complexes that facilitate the
orderly linking of amino acids into polypeptide chains.
 Transcription occurs in the nucleus, and mRNA is then transported to the cytoplasm,
where translation occurs.
 The transcription of a protein-coding eukaryotic gene results in pre-mRNA, and further
processing yields the finished mRNA.
o The initial RNA transcript from any gene, including those specifying RNA that is
not translated into protein, is more generally called a primary transcript.
find more resources at oneclass.com
find more resources at oneclass.com
Unlock document

Samuel Mohebban Chapter 17 Notes Exam 2
2
 Triplet code- the genetic instructions for a polypeptide chain are written in the DNA as
a series of non-overlapping, three nucleotide-words
 The Template strand provides the pattern, or template, for the sequence of nucleotides
in an RNA transcript.
 An mRNA molecule is complementary to its DNA template, not identical.
 The mRNA nucleotide triplets are called codons, and they are customarily written in the
5’  3’ direction.
 During translation, the sequence of codons along an mRNA molecule is decoded, or
translated, into a sequence of amino acids making up a polypeptide chain.
 There are 64 codons total, and the three codons that do not designate amino acids are
stop signals, or termination codons, marking the end of translation.
 AUG is a common start codon, and it codes for the amino acid methionine.
Transcription
 An enzyme called RNA polymerase pries the two strands of DNA apart and joins
together RNA nucleotides complementary to the DNA template strand, thus elongating
the RNA polynucleotide.
o Can only assemble a polynucleotide in its 5’ 3’ direction.
o Don’t need a primer like DNA polymerase.
 The DNA sequence where RNA polymerase attaches and initiates transcription is known
as the promoter.
o In bacteria, the sequence that signals the end of transcription is called the
terminator.
 The stretch of DNA downstream from the promoter that is transcribed into an RNA
molecule is called a transcription unit.
o Promoter sequence is upstream from the terminator.
 The three stages of transcription
o Initiation
o Elongation
o Termination
 In eukaryotes, a collection of proteins called transcription factors mediate the binding
of RNA polymerase and the initiation of transcription.
 Only after transcription factors are attached to the promoter does RNA polymerase II
bind to it to form a transcription initiation complex.
o TATA box is a crucial promoter DNA sequence.
 As RNA polymerase moves along the DNA, it untwists the double helix for pairing with
RNA nucleotides.
o The enzyme adds nucleotides to the 3’ end of the growing RNA molecule as it
continues along the double helix.
o The new RNA molecule peels away from its DNA template, and the DNA double
helix re-forms.
find more resources at oneclass.com
find more resources at oneclass.com
Unlock document

Samuel Mohebban Chapter 17 Notes Exam 2
3
 The mechanism of termination differs between bacteria and eukaryotes.
o In bacteria, transcription proceeds through a terminator sequence in the DNA.
 The terminator functions as the termination signal, causing the
polymerase to detach from the DNA and release the transcript, which
requires no further modification before translation.
o In eukaryotes, RNA polymerase II transcribes a sequence on the DNA called the
polyadenylation signal sequence- which specifies a polydenylation signal in
the pre-mRNA.
 During RNA processing, both ends of the primary transcript are altered.
 Each end of a pre-mRNA molecule is modified in a particular way.
o The 5’ end, which is synthesized first, receives a 5’ cap- a modified form of a
guanine G nucleotide added onto the 5’ end after transcription of the first 20-
40 nucleotides.
o At the 3’ end, and an enzyme then adds 50-250 more adenine (A) nucleotides
forming a Poly-A tail.
find more resources at oneclass.com
find more resources at oneclass.com
Unlock document