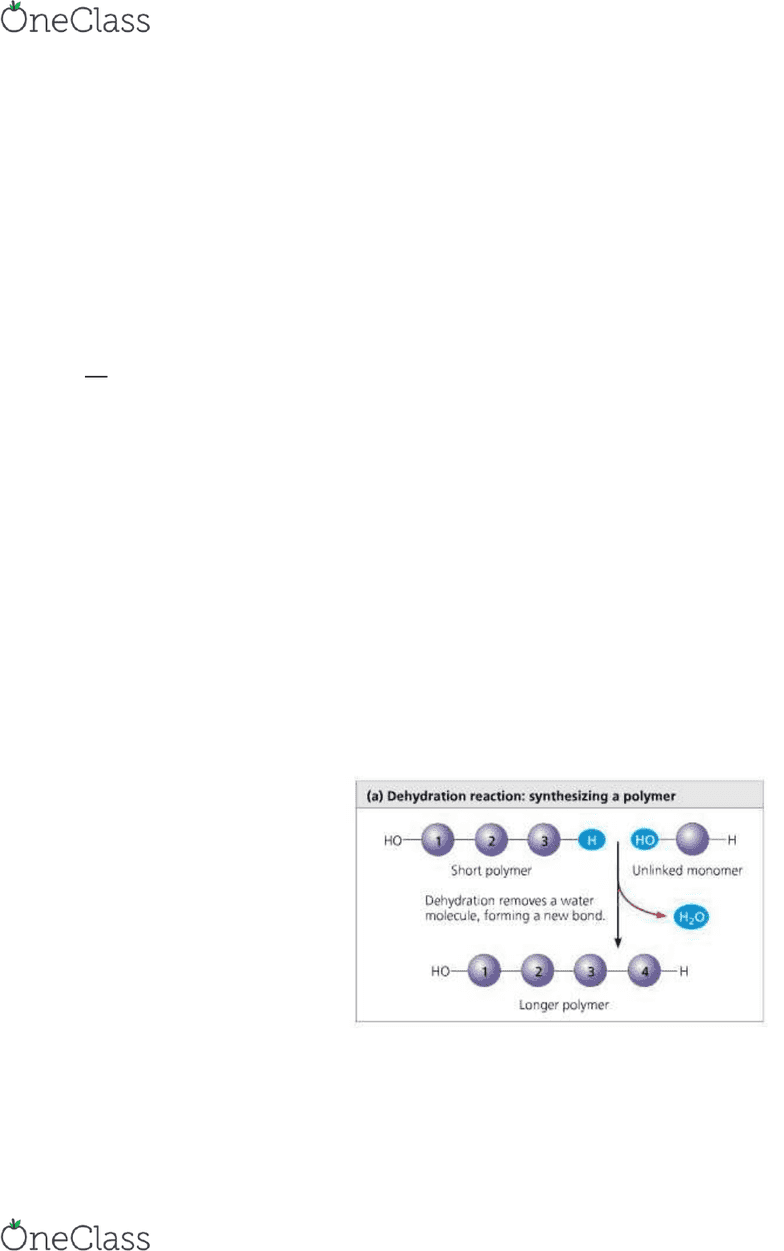 Sam Mohebban 5.1-5.5 Notes Exam 1
1
 Most important large molecules found in every living thing
o Carbohydrates
o Lipids
o Proteins
o Nucleic Acids
 Macromolecules- Huge molecules on the alpha molecular scale
o Carbohydrates
o Proteins
o Nucleic Acids
 Large biological molecules exhibit unique emergent properties arising from the orderly
arrangement of their atoms
5.1
 Polymers- A long molecule consisting of many similar or identical building blocks linked by
covalent bonds. Like a train consists of a chain of cars.
o From the Greek polys, many, and meros, part
o Found in three of the four classes of life’s organic compounds
 Carbohydrates
 Proteins
 Nucleic Acids
 Monomers- Repeating units that serve as the building blocks of a polymer
o Smaller molecules
o From the Greek monos, single
 Synthesis and Breakdown of Polymers
o Enzymes- Specialized macromolecules that speed up chemical reactions and facilitate the
breakdown of polymers in cells.
o Dehydration reaction- when monomers are connected by a reaction in which two
molecules are covalently bonded to each other, with the loss of a water molecule
 One monomer provides a hydroxyl group (--OH), while the other provides a
hydrogen (--H).
 This reaction is repeated as monomers are added to the chain, making a polymer
o Hydrolysis- process that disassembles polymers, opposite of dehydration reaction.
 Means water breakage (from the Greek hydro, water, and lysis, break)
 Bond between monomers is broken by the addition of a water molecule, with a
hydrogen from water attaching to one monomer and the hydroxyl group attaching
to the other.
 Digestion is an example of natural hydrolysis in our bodies
find more resources at oneclass.com
find more resources at oneclass.com
Unlock document 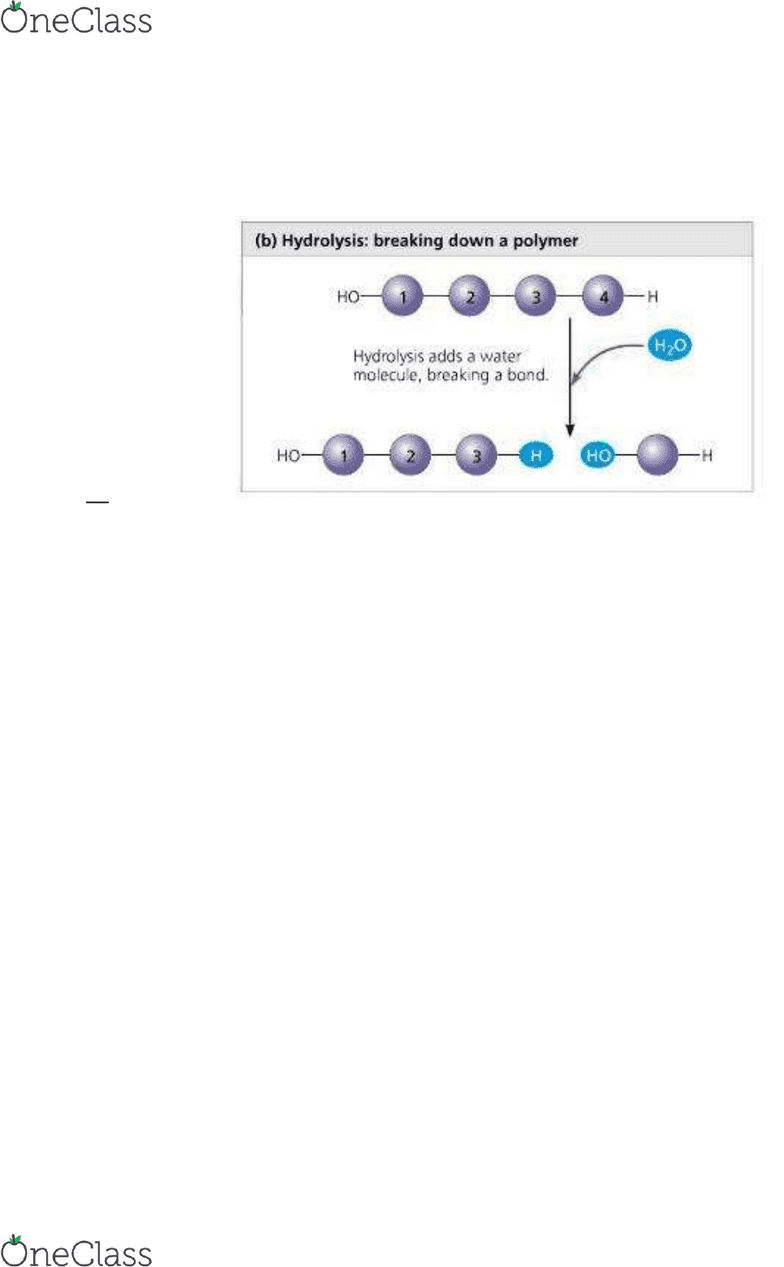 Sam Mohebban 5.1-5.5 Notes Exam 1
2
 Bulk of organic material in our food is too large for our cells, therefore
there are enzymes within our digestive tract that speed up hydrolysis
 These cells can then use dehydration reactions to assemble the monomers
into new polymers that can perform specific
functions required by the cell
5.2
 Molecular structure and function can be grouped by class
 Four major classes of large biological molecules
 Carbohydrates- include sugars and polymers of sugars
o Monosaccharides- simplest are the (simple sugars)
 Monomers from which more complex carbohydrates are built
o Disaccharides- double sugars consisting of two monosaccharides joined by a covalent
bond.
o Polysaccharides- Carbohydrate macromolecules composed of many sugar building
blocks
 Sugars
o Monosaccharides
 From Greek monos, single, and sacchar, sugar
 Generally, have molecular formulas that are some multiple of the unit CH2O.
 Glucose (C6H12O6) is the most common monosaccharide and essential in the
chemistry of life
 Molecule has a carbonyl group (CO) and multiple hydroxyl groups (--
OH) [trademarks of sugar]
o Depending on the location of the carbonyl group, a sugar is
either an aldose (aldehyde sugar) or ketose (ketone sugar)
 Glucose in an aldose
 Fructose (isomer of glucose) is a ketose
 Monosaccharides are major nutrients for cells.
 Cellular Respiration- cells extract energy from glucose molecules by
breaking them down in a series of reaction
 **See diagram below**
find more resources at oneclass.com
find more resources at oneclass.com
Unlock document 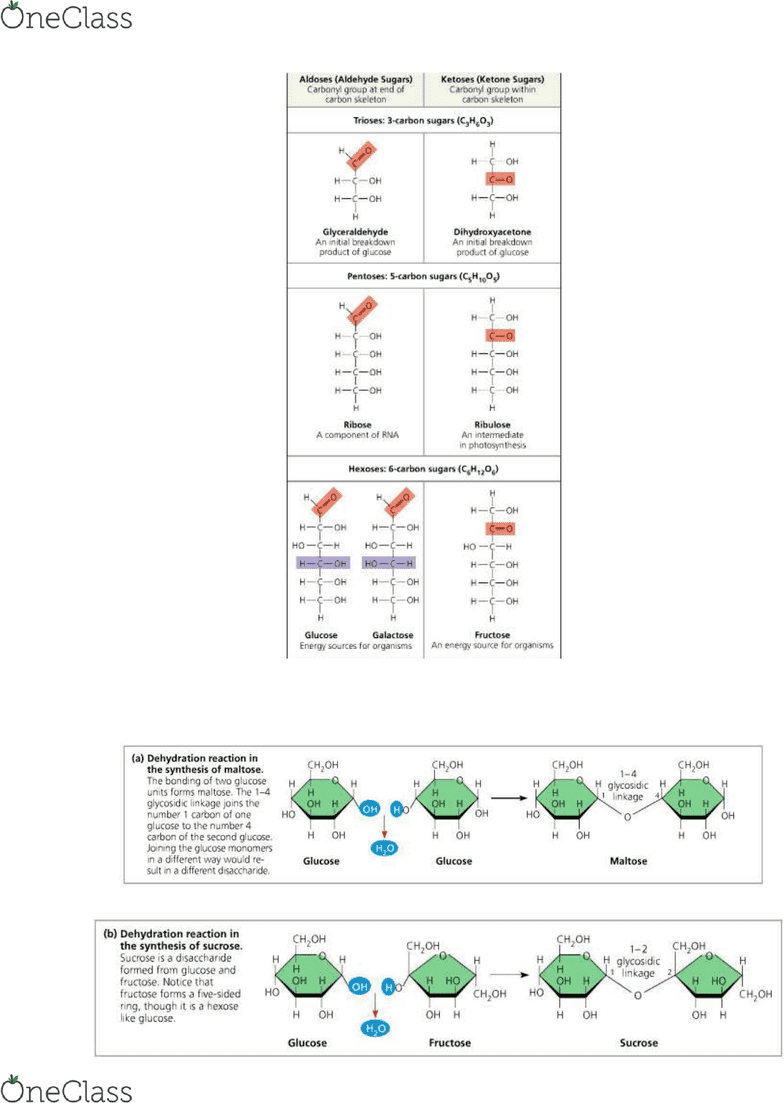