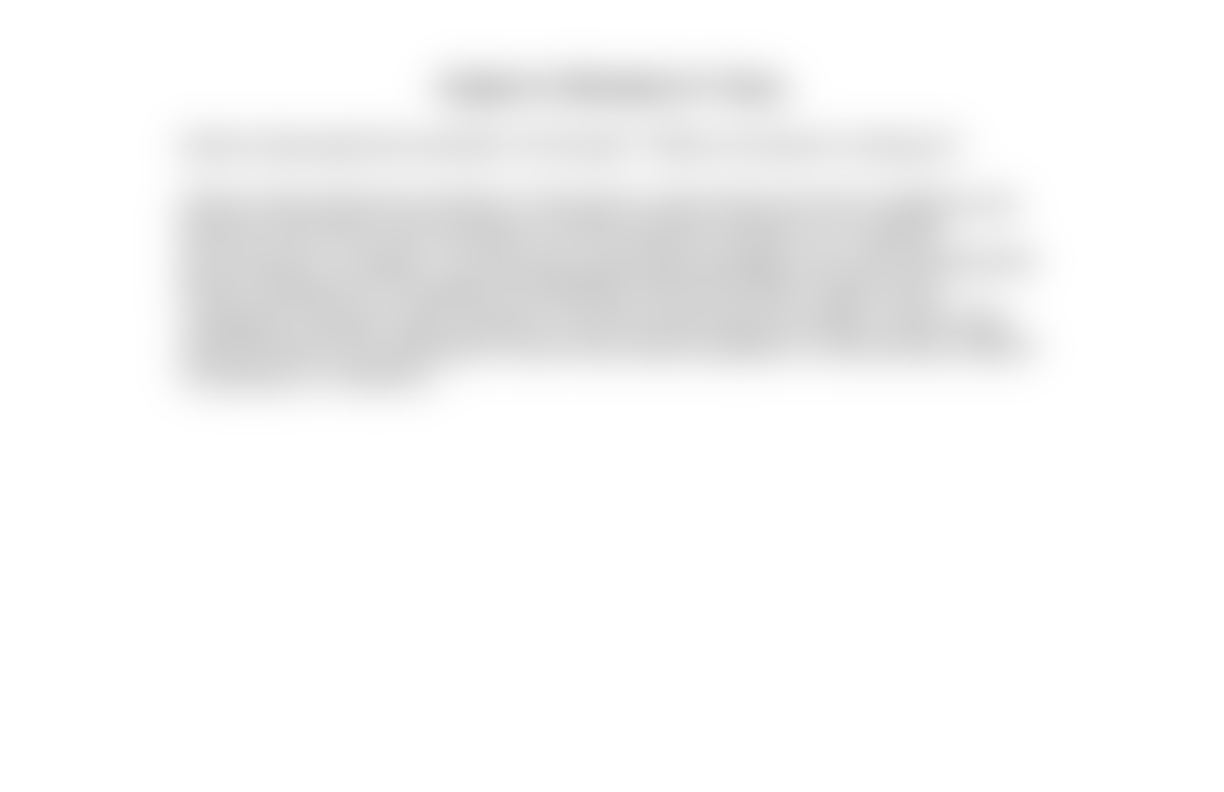 SLS 12 Section 3
Name: Alex Simon
The Origin of Species
Study Guide
Chapter 5: Laws of Variation
The effects of “use” and “disuse” seem to puzzle Darwin. What are the
observations that he trying to explain and what are the competing hypotheses?
Darwin notes the role that use and disuse play as species evolve and certain
traits and genes are passed down to offspring. Darwin mentions birds with
varying wing sizes and strengths that have naturally developed that way due to
their flying/traveling habits and low vision for cave-dwelling animals. He attempts
to explain that in addition to advantageous variations, unused organs or traits can
also diminish or disappear over time. In addition to the effects that certain habits
have on a species, these effects must be inherited in order for the process of
natural selection to be successful. The competing hypotheses that Darwin
discusses include the natural selection of variations gained through heredity
versus the effects that certain habits have on a species. Darwin concludes that
traits/variations gained through heredity are more dominant than the effects of
habit. Darwin goes on to hypothesize that due to the susceptibility of organs to
variation, species could not have been created independently.
Chapter 6: Difficulties On Theory
Darwin discusses the evolution of the eye? What is his point in doing so?
Darwin discusses the evolution of the eye to show that over time variations can
become more and more complex until the optimal variation for a specific
environment is created. The eye has continually changed over time showing that
these changes do not happen immediately and that certain organs have
undergone variation after variation to arrive where they are today. Darwin also
uses the eye as an example to show that natural selection is the primary method
of passing on variations.
Unlock document

The effects of use and disuse seem to puzzle darwin. Darwin notes the role that use and disuse play as species evolve and certain traits and genes are passed down to offspring. Darwin mentions birds with varying wing sizes and strengths that have naturally developed that way due to their flying/traveling habits and low vision for cave-dwelling animals. He attempts to explain that in addition to advantageous variations, unused organs or traits can also diminish or disappear over time. In addition to the effects that certain habits have on a species, these effects must be inherited in order for the process of natural selection to be successful. The competing hypotheses that darwin discusses include the natural selection of variations gained through heredity versus the effects that certain habits have on a species. Darwin concludes that traits/variations gained through heredity are more dominant than the effects of habit.

1.. Polymorphisms for a given trait are relatively common in most species. Discuss the possible advantages or polymorphisms in terms of evolutionary fitness. Be sure to relate your discussion to a specific example. It is also possible that organisms showing more heterozygosity may actually be less fit. Describe one such possible scenario.

2. In the peppered moth (Biston betularia), black individuals may be either homozygous (A1A1) or heterozygous(A1A2), whereas the pale gray moths are homozygous (A2A2). Suppose that in a sample of 250 moths from one locality, 108 are black, and 142 are gray.

3. Retrace the history of primate evolution from early primates to monkeys, apes and hominins. When did some ofthe significant divergences occur (such as between the prosimians and the monkeys or between the chimps and hominins)? What was happening with the continents and the major climatic conditions during these times?What are the major species (including the extinct species) along the human lineage after the split with the chimps and bonobos? Where did many of these events occur on the globe and when?

4. Spencer Wells described his study how the genetic markers in humans are being used to infer the historical geographical distribution of humans and the dispersal of our ancestors. Explain how the genetic markers on our DNA (from blood samples) helps us understand that history. What are the techniques he is using? What is the nature of the evidence? What are the major conclusions about the journey of our ancestors out of Africa?What were the major migrations of humans to all the other continents? Approximately when did each migration occur and what were the major paths? How does the evidence support these conclusions? What Supporting evidence besides the DNA evidence is being used to support these conclusions?

5. Provide an adaptive and a non adaptive hypothesis for the evolutionary loss of useless organs, such as eyes in many cave-dwelling animals. How might these hypotheses be tested?

8. Suppose that a mutation in a species of annual plant increases allocation to chemical defenses against herbivores, but decreases production of flowers and seeds (i.e., there is an allocation trade-off). What would you have to measure in a field study in order to predict whether or not the frequency of the mutation will increase?

9. In many socially monogamous species of parrots and other birds, both sexes are brilliantly colored or highly ornamented. Is sexual selection likely to be responsible for the coloration and ornaments of both sexes? How can there be sexual selection in pair-bonding species with a 1:1 sex ratio, since every individual presumably obtains a mate? Which of the models of sexual selection described in the book might account for these species characteristics?

10. Kin selection explains why organisms may provide benefits to relatives. Is there a conflict between the principle of kin selection and the evolution of siblicide and abortion?

11.Many species of albatrosses and other seabirds nest in colonies on islands. The adult search for food at sea,sometimes over great distances. Some ecologists who study seabirds turn to their favorite topic of discussion in a bar one evening, and one says, âI can imagine an albatross genotype that destroys the eggs of nestlings of its colony mates when the parents are away foraging, and leaves them dead without eating them. Do you think such a behavior would evolve?â One of his companions says, âYes, because it would make more food available for the albatross and its offspring.â Another says, âNo, because it would threaten the survival of the population.â The fourth says, âYouâre both wrong. I have a different explanation for why albatrosses donât kill othersâ chicks.â What is the fourth ecologistâs explanation, and why does she think her companions are wrong?

12. The concept of a species is fundamental to understanding biology, yet there may not be one definition that fits all âtypesâ of organisms (e.g. animals, plants, fungi, bacteria, slime mold, lichens, etc.). Discuss several of the definitions of a species as presented in class and present your own definition for a species. Compare the strengths and weaknesses of each definition. Ernst Mayr is strong proponent of the biological species concept.How does he justify his position? Do you agree or disagree? If we employ the biological species concept, when did species first exist? What were organisms before then, if not species? What might the consequences of the emergence of species be for processes of adaptation and diversification? Be sure to explain your reasoning thoroughly.

14. Respond to the following quote from the character named Mr. Spock in âStar Trekâ:âA truly successful parasite is commensal, living in amity with its host, or even giving it positive advantages, as for instance, the protozoans who live in the digestive system of your termites and digest for them the wood they eat. A parasite that regularly and inevitably kills its host cannot survive long, in the evolutionary sense, unless it multiplies with tremendous rapidity ... it is not pro-survival.âFrom what you have learned in this course, do you agree or disagree with Spock? How can you apply your reasoning to the relative âfitnessâ of HIV which causes AIDS, the Ebola virus which causes hemorrhagic fever,fleas which suck blood from dogs, or the prokaryotic ancestors of mitochondria and chloroplasts?

15. In many species of birds and mammals, clutch size is larger in populations at high latitudes than in population sat low latitudes. Species of lizards and snakes at high latitudes often have smaller clutches, however, and are more frequently viviparous (bear live young rather than laying eggs), than low-latitude species. What selective factors might be responsible for these patterns? Explain your reasoning.

16. The popular media often presents evolution as being a predictable process with a definite goal. For instance, in one âStar Trek: Voyagerâ episode, the captain instructs the shipâs computer to extrapolate the âprobable courseâ of evolution of hadrosaurs (a bipedal dinosaur), if hadrosaurs had been removed from Earth before the Cretaceous-Tertiary (K-T) Extinction and allowed to evolve on another planet. What information about the hadrosaursâ new environment would have been useful in developing the best possible prediction? Given what you know on genetic drift and selective agents, is it possible to accurately predict the long-term course of evolution?

17. Young children often develop strong food preferences that sometimes seem bizarre to their parents --- such as wanting to eat only a certain food prepared in a familiar way, or being reluctant to each new foods or foods with strong or bitter tastes (like coffee and some vegetables). Develop an evolutionary explanation for such preferences. What evidence would you gather to investigate your hypothesis and rule out alternative explanations?

18. Many organisms, such as mammals, only reproduce by sexual means. Other organisms are exclusively asexual,such as many of the bacteria and fungi. And still others have ways of propagating by both sexual and asexualmeans. Discuss the relative advantages and disadvantages of each mode of reproduction. Why arenât all organisms sexual critters? Why are many asexual organisms still very successful as evidenced by the pure abundance and diversity? What is the adaptive significance of having different genders (e.g. male and female)?In other words, why sex?

19. How might differential expression and regulation by Hox genes contribute to mosaic evolution in which different segments of an animal body plan evolve different morphology?

20. Development of a morphological structure involves many different types of gene products, including transcription factors, signaling proteins, and âeffectorâ genes such as enzymes. When a morphological change occurs in a single mutational step, which of these types might be more or less likely to be involved? Within a gene, would such single-step events be more likely to involve coding or non-coding sequences, and what characteristics of the geneâs function might affect this likelihood?

21. Since 2001, the complete DNA sequences of the genomes of many people have been determined. If humans,along with other forms of life, have evolved from a common ancestor, what evidence of this would be expected in the human genome? In what ways might the history and processes of evolution help us interpret and make sense of the human genome sequence data?

22. Paleontologists and some biologists commonly infer function, and even behavior, from anatomical details.Skeletal features, for example, are often used to infer that an extinct mammal (such as an early hominid) was highly, somewhat, or not at all arboreal. This inference assumes a good fit of form to function (i.e., optimal form). Can this assumption be justified?

23. Stephen Jay Gould (1989) and others have argued that the evolution of self-conscious, intelligent species (i.e.humans) was historically contingent: it would not have occurred had any of a great many historical events been different. The philosopher Daniel Dennett (1995) and others have disagreed, arguing that convergent evolution is so common that if humans had not evolved, some other lineage would probably have given rise to a species with similar mental abilities. What do you think, and why? If Gouldâs position is right, what are its philosophical implications, if any?

25. Discuss how a creationist versus an evolutionary biologist might explain some human characteristics and the implications of their differences. Sample characteristics: eyes; wisdom teeth; individually unique friction ridges(fingerprints); five digits rather than some other number; susceptibility to infections; fever when infected;variation in sexual orientation; limited life span.