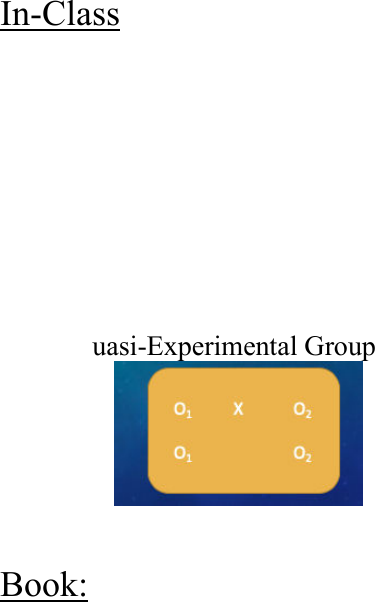 SWK 420 Chapter 5
1
In-Class
• Good studies have:
o Random assignments
o Control groups
• Threats to Internal Validity
o History: Natural disasters (hurricanes)
o Maturation: Developmental maturity.
o Statistical regression to the mean: Giving the anxiety questionnaire right before
the test.
o Instrumentation or Testing: Questionnaire too long or tested too many times.
o Mortality: People missing the intervention
• Quasi-Experimental Group Design
• Random group is missing.
Book:
Choosing the Right Design
• Design issues related to finances include:
o The use of staff time for collecting data
o Postage, telephone, or travel expenses
o Purchase of copyrighted instruments or scales
o Computer processing of the data
o The use of consultants
o Release time to write the report
o Etc.
• In terms of evidence-based practice, group research designs with randomized
assignment to the treatment condition (experiments) or with time-series designs with
a good comparison provide the most credible evidence.
• Time-series designs without a comparison group provide a middle range of
credibility.
Selecting Subjects
• Proactive research: Being about to plan months in advance and can build a process for
future recruitment of eligible clients
• Retroactive research: Current clients may be compared to clients who previously
completed a program or who have already dropped out in the past.
Experimental Research
• The classic experimental design is the idea, the gold standard or model to which all other
research designs are compared.
Unlock document

Already have an account? Log in
SWK 420 Chapter 5
2
• What is an experiment? –It is a controlled study where clients or subjects are randomly
assigned to a group (sometimes called a condition) where they will receive a new (or
different) intervention from those designated to be in the control group.
• The notion of random assignment is crucial—it prevents a number of extraneous
variables or possibly cofounding variables and biases from interfering with the
researcher’s ability to make a conclusion about the strength or weakness of the
intervention.
The Classic Experimental Research Design
• These designs have two main features:
o Clients (or subjects) who participate in the experiment are randomly assigned.
o Besides the experimental group, some subjects must be assigned to a control (or
comparison) group that does not get the new intervention.
• Shorthand notation for the classic pretest-posttest control group design is written:
R O1 X O2
R O1 O2
• The R in this notation scheme stands for the random assignment of clients to either the
experimental or the control group.
• The X represents the intervention or stimulus.
• The first observation (O1) is called the pretest, and the second observation (O2) is called
the posttest.
• This design provides information not only about changes in the group that receives the
intervention, but also comparable information from the group that does not get the
experimental intervention.
• Random assignment must occur prior to the intervention.
• In double-blind procedure, neither the researcher nor the research subject knows
whether participants are in the control or the experimental group.
The Posttest-Only Control Group Design
• This design is handy for those situations where a pretest might affect the posttest results
or when it is not possible to conduct a pretest.
• This design is also useful in situations where anonymity is paramount—so it would not
be possible to compare an individual’s pretest and posttest scores.
• Shorthand notation for the Posttest-Only Control Group Design:
R X O1
R O2
Unlock document

Already have an account? Log in
SWK 420 Chapter 5
3
The Solomon Four-Group Design
• Shorthand notation for the Solomon Four-Group Design
R O1 X O2
R O1 O2
R X O2
R O2
• This design provides two opportunities for the treatment effect to be demonstrated.
• The design’s strong point is that the investigator can maximally control for alternative
explanations and thus increase the confidence that can be placed in the findings.
Internal and External Validity
• Internal Validity: whether the intervention was truly responsible for the observed
differences in the dependent variable
• The internal validity of a study can be threatened by extraneous variable.
• Extraneous variables: those not considered or purposely incorporated into the experiment.
• External validity is concerned with whether a study can generalize well to other
populations, locations, and client groupings.
• Measurement validity is concerned with how well an assessment instrument measures the
concept it was designed to capture.
• Conversational uses of “validity” or “valid” when applied to a research project generally
mean that a study was real, authentic, meaningful, relevant, or simply just a “good”
study.
Major Threats to Internal Validity
• Maturation: The aging of participants or different rates of physical growth or
development within comparison groups are examples of influences that should recognize
and attempt to control as much as possible.
• History: This refers to specific events that occur between the pretest and posttest that
were not part of the researcher’s design and that could influence the results. (Personal
events in a client’s life are not considered to be threats to the internal validity of a study.)
• Testing: Repeated testing provides practice and in itself can improve test scores. The
threat of testing is sometimes known as the practice effect.
• Instrumentation: This term refers to changes in:
o The use of the measuring instrument
o The way the instrument is scored
o Procedures used during the study
o The way the dependent carriable is counted or measured.
Unlock document