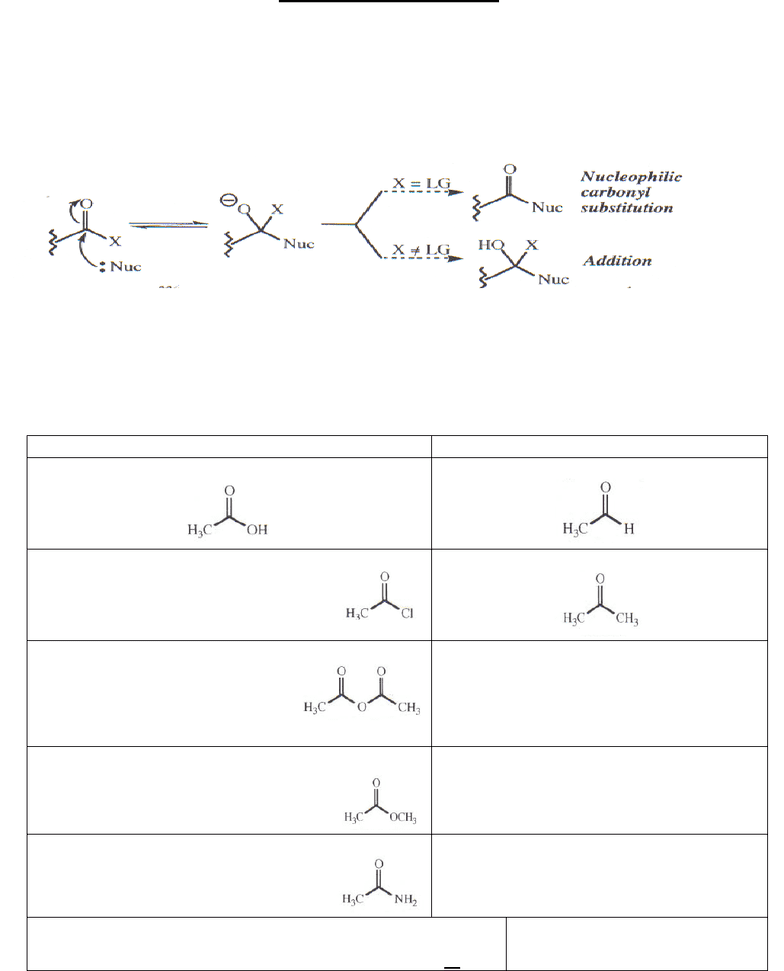 Carbonyl Chemistry:
Survey of Reactions and Mechanisms:
When dealing with Carbonyls, we consider two general mechanism types:
Carbonyls
Have X as a Leaving Group
Don’t have X as a Leaving Group
Carboxylic Acid (RCO2H)
Aldehyde (RCHO)
Acyl Halide (ROX)
Ketone (RCOR’)
Acid Anhydride (RCO2COR’)
Ester (RCO2R’)
Amide (RCONR’2)
Nitrile (RCN) (doesn’t look like a Carbonyl because it doesn’t
have a C=O but it reacts very similarly) H3C—C=N
2)… we then get a
tetrahedral
intermediate whose
fate is determined by
the presence of a
leaving group
1) we start with
the carbonyl...
which is attacked
by the nucleophile
3b) …If X is NOT a leaving group, the O- accepts a
“H+” and the result is an ADDITION REACTION
3a) …If X is a leaving group, then you kick out the leaving
group and the result is a SUBSTITUTION REACTION.
Unlock document 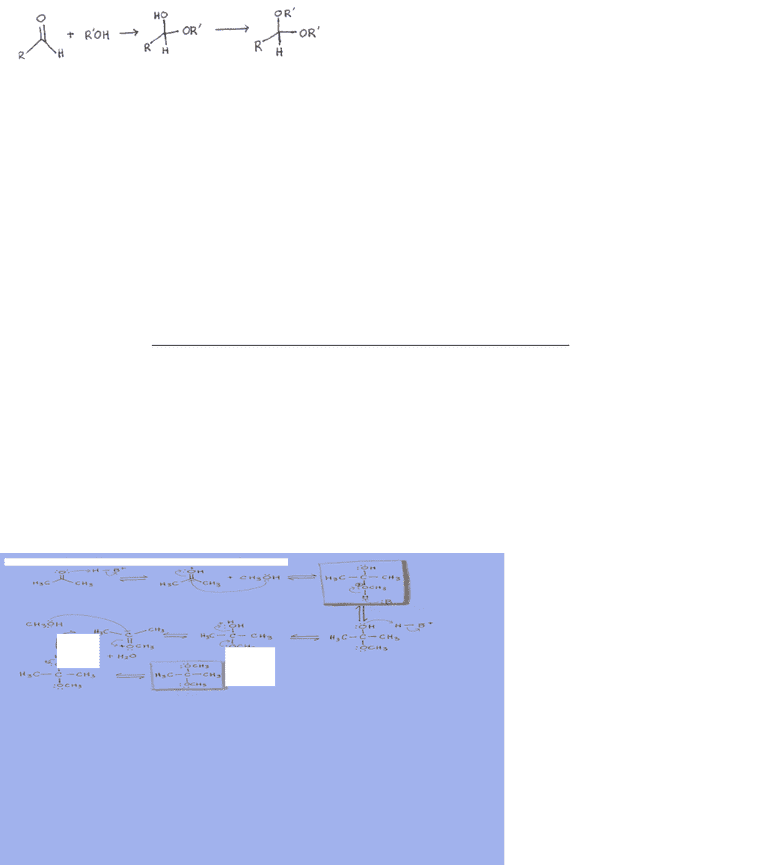 • Another tetrahedral
intermediate is formed.
• The HOCH3+ is
deprotonated by the :B
and ultimately, the ketal
is formed, as shown in the
pink box.
C= O Survey of Reactions
I. HEMIACETAL/ACETAL and
HEMIKETAL/KETAL FORMATION
Aldehyde  Hemiacetal  Acetal
Ketone  Hemiketal  Ketal
• Ketone/aldehyde + alcohol = hemiacetal/hemiketal after one equivalent of alcohol
= acetal/ketal after two equivalents of alcohol
*hemiacetal, hemiketal, and half all start with the letter h, this is a
reminder that when you produce the hemiacetal or hemiketal, you are
halfway to the acetal/ketal
• A hemiaceta/hemiketal has a carbon attached to an “ether” on one end and an alcohol on the
other.
o i.e. RO—C—OH
• An acetal/ketal has a carbon that is attached to two “ethers”. If you take a hemiacetal and
replace the OH with an OR’ group then you get an acetal.
o i.e. RO—C—OR’
First, let us look at a generic mechanism for the formation of an acetal or ketal. Here, we start with the
ketone, so we will be forming a hemiketal, and then a ketal.
• In step 1) the oxygen is protonated. This makes the carbonyl carbon more electrophilic by
giving it a greater partial positive charge
• Then the first equivalent of alcohol attacks the electrophile in step 2)
• Then, the tetrahedral intermediate is formed, when this is deprotonated by the :B, the hemiketal
is formed as seen inside the orange box
• The mechanism doesn’t stop here… the remaining alcohol group on the molecule is protonated
by H—B+, to form H2O as a leaving group, with this, a double bond is formed.
• Then, the second equivalent of alcohol attacks the electrophilic carbonyl carbon
1)
2)
Unlock document