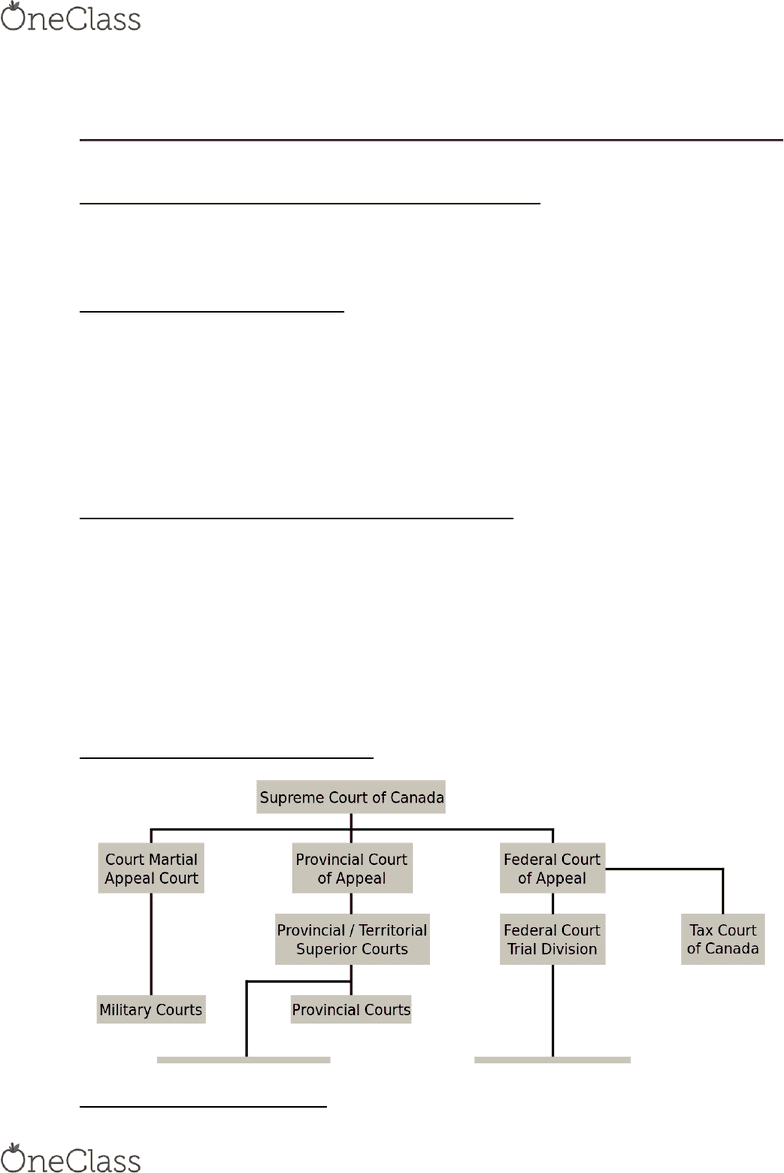 Is crime increasing or decreasing in Canada?
oIn essence, crime was going up from the 60s-early 90s, and
dropped afterwards
oCrime has been going down since 1990 across the country
What is the most common type of crime heard in adult courts?
oOut of the pool of offences seen at the adult court level, the
most common is for a category of crimes called the
administration of justice offences (20%)
oWhat’s important is these are offences that someone can only
be charged with if they’re already in the system for doing
something else
oIf you’re on probation and you breach probation, if you fail your
drug testing, if you fail to appear in court, you skip your bail
hearing, etc. – those are administration of justice offences
oThe next most common offence is impaired driving
oOther offences are non-serious, non-violent offences. Those that
are serious/violent are very low.
How many crimes are reported to police annually?
oOn average, approximately, there are over 2 million reported
incidents to police every year
How many result in incarceration?
oApproximately 11% of all reported incidents actually end up
being dealt with in the court system
o4% of those cases end with someone going to prison
How does Canada’s incarceration rate compare worldwide?
oRelative to most Western-European countries, our rate is pretty
high
oThe United States – 700/100,000 people are incarcerated
find more resources at oneclass.com
find more resources at oneclass.com
Unlock document

oCanada is doing better than England, Scotland, NZ, and the US.,
but we’re not doing great
How much does it cost to incarcerate an offender?
oOn average the amounts are $300 a day
oThe annual rates, on average, $100,000 to incarcerate a male
offender and upwards $200,000 to incarcerate a female (we
have fewer females than males)
oIn the community (parole) it’s substantially less ($30,000 per
year)
What is the status of Aboriginal offenders in the correctional system?
oAboriginal offenders are grossly over-represented at all levels of
the criminal justice system, but particularly at the correctional
level
oThe number of Aboriginal offenders who are incarcerated has
been steadily increasing
oThe policies implemented to decrease this percentage are
not/have not been working
o3% of the Canadian population would self-identify as Aboriginal
oApproximately 35% of women incarcerated at the federal level
are Aboriginal; for males it is 22%
Sentencing
What is a Sentence?
Imposition of a legal sanction on persons convicted of an offence
Purpose of Sentencing
Specific deterrent – the belief that by sentencing you, the punishment
will prevent you from committing that offence again
find more resources at oneclass.com
find more resources at oneclass.com
Unlock document