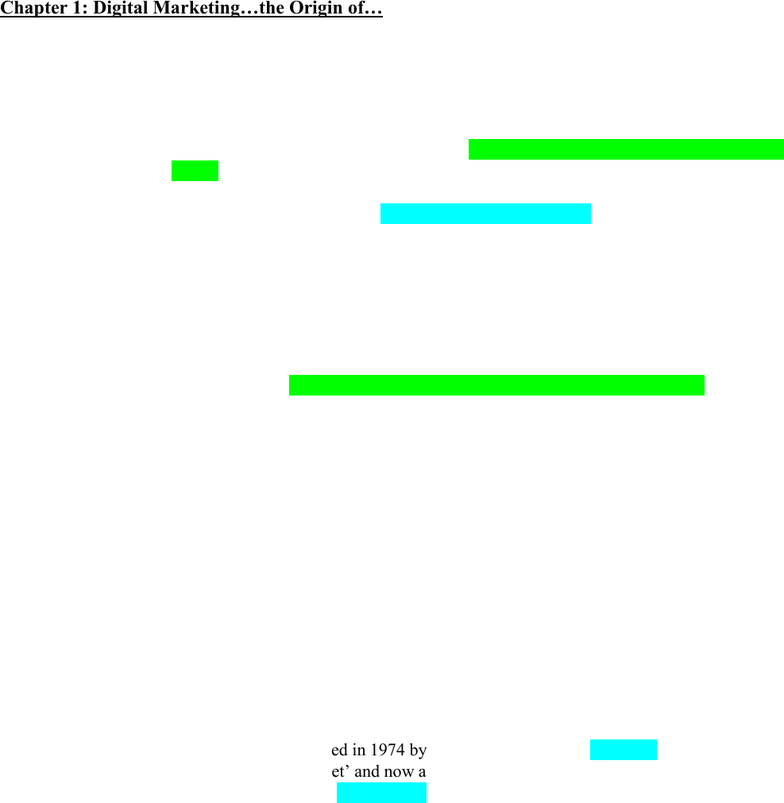 Chapter 1: Digital Marketing…the Origin of…
I. Early Networks
a. The Internet story started in 1957
i. Starts with the USSR’s launch of the sputnik satellite
ii. It signaled that the U.S. was falling behind the Russians in the technology stakes, prompting the
US government to invest heavily in science and technology
b. In 1958, the US Department of Defense set up the Advanced Research Projects Agency (ARPA)
i. ARPA= a specialist agency established with a specific remit: marking sure the US stayed ahead
of its Gold War nemesis in the accelerating technology race
c. In August 1962, a computer scientist, Joseph Carl Robnett Licklider (1915-1990), VP at technology
company Bolt Beranek and Newman, wrote a series of memos discussion the concept of an ‘intergalactic
computer network’
i. Licklider’s revolutionary ideas, amazingly, encompassed practically everything that the internet
has become today
d. In October 1963, Licklider was appointed head of the Behavioral Sciences and Command and Control
programmes at ARPA
i. He convinced the agency of the importance of developing computer networks
ii. The seed for the Advanced Research Projects Agency Network (ARPANET) – the precursor to
the internet – was sown before he left ARPA
e. In 1965, researchers hooked up a computer at Massachusetts Institute of Technology’s (MIT) Lincoln Lab
with a US Air Force computer in California
i. For the first time, two computers communicated with each other using ‘packet’-based information
transmitted over a network
f. ARPA started the ARPANET project in 1966, claiming that it would allow the powerful computers
owned by the government, universities and research institutions around the US to communicate with one
another and to share valuable computing resources
g. ARPA ploughed on, and on November 21, 1969, the first two computers were connected to the fledging
ARPANET, one at University of California, LA, the other at Stanford Research Institute
i. By December 5th the same year, the network doubled in size as they were joined by two other
computers
ii. The network grew quickly
h. By 1971, 15 US institutions were connected to ARPANET, and by 1974, the number had grown to 46,
and had spread to include overseas nodes in Hawaii, Norway and London
II. From ARPANET to Internet
a. The term ‘internet’ was first used in 1974 by US computer scientist Vint Cerf (commonly referred to as
one of the ‘fathers of the internet’ and now a senior executive and internet evangelist with Google)
i. Cerf was working with Robert Khan at DARPA on a way to standardize the way that different
host computers communicated across both the growing ARPANET and between the ARPANET
and other emerging computer networks
ii. The transmission control program (TCP) network protocol they defined evolved to become the
TCP/IP (transmission control program/internet) protocol suit that is still used to this day to pass
packets of information backwards and forwards across the internet
b. In 1983, the ARPANET started using the TCP/IP protocol – a move that many consider to signal the true
‘birth’ of the internet as we know it
i. This same year, the system of domain names (.com, .net, etc.) was invented
ii. By 1984, the number of ‘nodes’ on the still fledgling network passed 1,000 and began climbing
rapidly
iii. By 1989, there were more than 100,000 hosts connected to the internet, and the growth continued
III. Boom, Boom…Bang!
a. For a time, it seemed like the halcyon days of the late 1990s would continue forever, that the dot.com
bubble was impervious to bursting
Unlock document

i. Fueled by speculative investment and high-profile, high-tech IPOs, the NASDAQ Composite
stock index continued to rocket upwards
ii. Each new dot.com success fueled the fervor for technology stocks, blowing up the bubble a little
more
iii. On March 10, 2000, the NASDAQ index hit an intra-day high of 5,132.52 before settling to an
all-time closing high of 5,046 points
iv. And then it went into freefall
b. What happened to the railroads in the 1840s, radio in the 1920s and transistor electronics in the 1950s had
finally hit the dot.com boom
i. Between March 2000 and October 2002, some US $5 trillion in all was wiped off the market
value of technology stocks
ii. Speculative investment suddenly stopped, venture capitalists were less cavalier with their cash,
and high-risk start-ups with dubious business plans ran out of places to source funding
iii. With profits still a distant dream, even for high-profile internet start-ups, the coffers soon began
to run dry – it signaled the end of the road for many
c. Despite the occasional ‘blip’, both the stock market index and the fortunes of internet businesses
continued to wane until 2003 when the tide turned and things started to look up
i. Although there had been some high-profile closures, mergers and acquisitions in the wake of the
crash, the reality is that, for the internet industry as whole, the inevitable ‘readjustment’ had a
positive impact
ii. It essentially cleared the decks – sweeping away a plethora of unviable, poorly conceived and
poorly managed businesses – and served as a poignant reality check to those who remained
iii. Yes, there were casualties, but overall the industry emerged stronger, more focused and both
optimistic and, crucially, realistic about the future
d. Two other critical elements helped fuel the recovery, and to some extent, the public fascination with the
internet:
i. One was the meteoric rise of Google from relative obscurity to dominate the world of internet
search
ii. The other was the accelerated roll-out of high-speed, always-on broadband and access for
residential users
e. People could suddenly find what they were looking for online – could get access to what they wanted,
when they wanted it – without having to go through the frustrating rigmarole of a dial-up connection
i. It transformed the online experience, turning it from a passing curiosity into a useful everyday
tool for a much wider demographic of users
ii. The more people who used the internet, the more indispensable it became
f. The sheer size of the major internet players now has surpassed all previous understanding of both scale,
power and value, too
i. In February 2016, Google, albeit briefly, became the most valuable company in the world – for a
few moments it edged above Apple and closed the day on a value exceeding $533 billion
g. Digital marketing has become the most powerful form of marketing ever known to mankind
IV. Enough Technology…let’s talk about people
a. One of the key things to remember if you are new to digital marketing is this:
i. Digital marketing is not actually about technology at all, it’s all about people
ii. In that sense, it is similar to traditional marketing:
1. It is about people (marketers) connecting with other people (consumers) to build
relationships and ultimately drive sales
b. Technology merely affords you – the marketer – new and exciting platforms that allow you to connect
with people in increasingly diverse and relevant ways
i. Digital marketing is not about understanding the underlying technology, but rather about
understanding people, how they are using that technology, and how you can leverage that to
engage with them more effectively
ii. Understanding people is the real key to unlocking the potential of digital marketing
V. Introducing Consumer 2.0
Unlock document 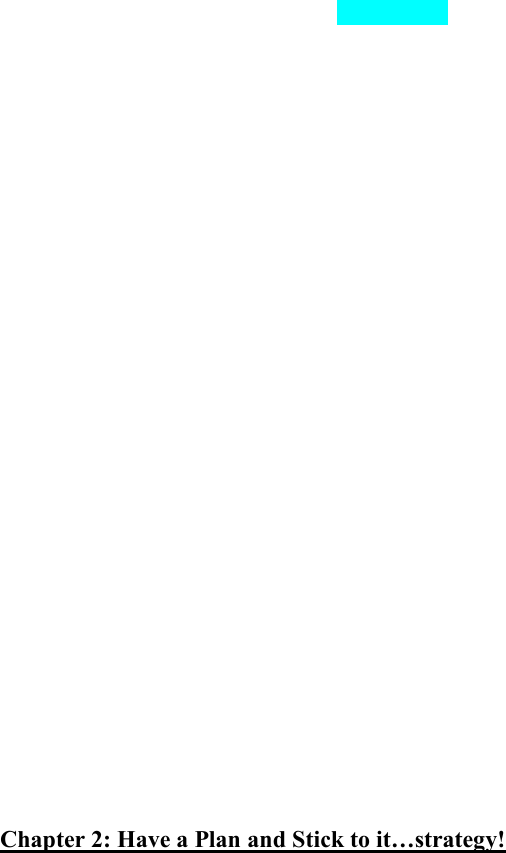 a. Let’s start off with what Web 2.0 is not:
i. It is not a new version of Web 1.0
ii. It is not a revolution in technology
b. Web 2.0
i. It is an evolution in the way that people are using technology
ii. It is about harnessing the distributed collaborative potential of the internet to connect and
communicate with other like-minded people wherever they are: creating communities and sharing
knowledge, thoughts, ideas and dreams
iii. Examples of Web 2.0 technologies:
1. Sharing photos on Instagram, reading and commenting on a blog, looking for friends on
Facebook, watching video clips on YouTube, etc.
iv. We have Business 2.0, Government 2.0, Education 2.0, Careers 2.0…and, of course, Marketing
2.0
c. Consumer 2.0 (new and improved)
i. With Web 2.0, broadband and rich media content, today’s consumers are in control like never
before
ii. They can choose the content they want, when they want it, in the way that they want it…they can
even create their own and share it with their friends, their peers, and the world – for free
d. ‘Consumers are becoming better informed, better connected, more communicative, and more in control
than ever’, highlights Julian Smith, an analyst with Jupiter Research writing for the ClickZ network
i. ‘They are better informed through the increased ability to access and sift an abundance of
information anytime, anywhere.
ii. They are better connected through the ability to instanteously communicate with others across
time zones and social strata.
iii. They are more communicative through the ability to publish and share their ideas and opinions.
iv. They are more in control through the ability not only to personalize their information and
entertainment consumption, marketing messages, and the products and services they buy, but also
to gain satisfaction on demand.’
e. Analysts at Jupiter Research identified seven key wants in which the increasingly widespread adoption of
technology is influencing consumer behavior:
i. 1. Interconnectivity
1. Networked digital technology is enabling consumers to connect with each other more
readily, be it through e-mail, instant messaging (IM), mobile messaging, or web-based
social networking platforms such as Facebook, Twitter, and LinkedIn – or more likely a
combination of all of these platforms
2. Peer-to-peer interaction is reinforcing social networks, and building new virtual
communities
ii. 2. Technology is leveling the information playing field
1. With digital technology, content can be created, published, accessed and consumed
quickly and easily
2. As a result, the scope of news, opinion and information available to consumers is broader
and deeper than ever
iii. 3. Relevance filtering is increasing
iv. 4. Niche aggregation is growing
1. The abundance and diversity of online content allows consumers to participate and
indulge their specialist interests and hobbies
v. 5. Micropublishing of personal content is blossoming
vi. 6. Rise of the ‘prosumer’
vii. 7. On-demand – anytime, anyplace, anywhere
Chapter 2: Have a Plan and Stick to it…strategy!
I. Understanding the Digital Consumer
a. The Digital Consumer Revealed
Unlock document

Early networks: the internet story started in 1957, starts with the ussr"s launch of the sputnik satellite, it signaled that the u. s. was falling behind the russians in the technology stakes, prompting the. Boom, boom bang: for a time, it seemed like the halcyon days of the late 1990s would continue forever, that the dot. com bubble was impervious to bursting. Facebook, watching video clips on youtube, etc: we have business 2. 0, government 2. 0, education 2. 0, careers 2. 0 and, of course, marketing. Niche aggregation is growing: the abundance and diversity of online content allows consumers to participate and indulge their specialist interests and hobbies, 5. Micropublishing of personal content is blossoming: 6. Rhys jones of interactive marketing trends: these consumers are doing exactly what people have been doing for thousands of years. Development: putting it all together, taking the agreed design and constructing the actual pages of the site, crafting the content, links and navigation hierarchy, 4.