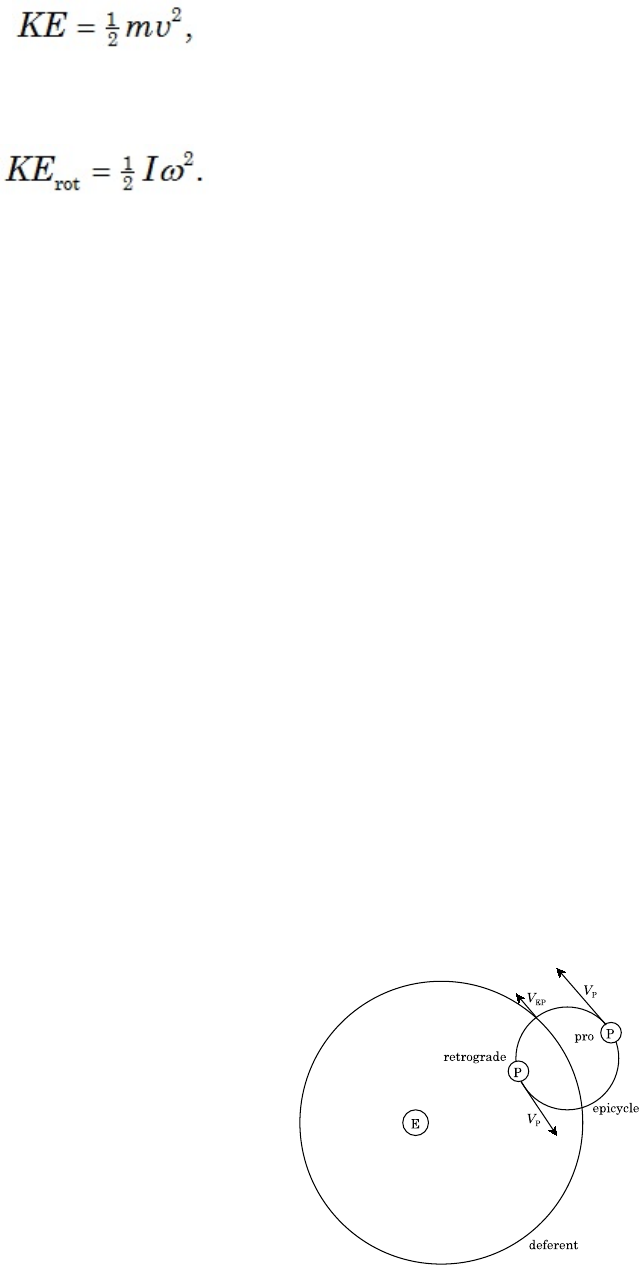 2/17
Rotational Kinetic Energy
Just as translational kinetic energy if given by
Rotational kinetic energy is given by
Chapter 9 — Gravity
Models of the Solar System
Ancient Greeks could not detect the motion of the Earth — assumed the Earth to be at rest with
the rest of the universe moving around it — geocentric model of the solar system
In this model, the stars move around the Earth once each day. The stars were considered to be
attached to the inside of a large sphere called the Celestial Sphere, which rotated once a day
about the Earth.
Seven “stars” would move relative to the “fixed” stars. These “wandering” stars were called
planets.
The ancient planets in order of their distance from the Earth:
Moon, Mercury, Venus, Sun, Mars, Jupiter, Saturn
Most of the time, these planets move from west to east against the background of the fixed stars.
This is called prograde motion.
Once in a while, planets are seen to drift from east toward west relative to the fixed stars —
retrograde motion.
Ptolemy — Greek astronomer — developed an Earth-centered
or geocentric model of the solar system.
In his model, each planet moved around a small circle called an
epicycle.
The epicycle in turn moved around the Earth on a circle called
the deferent.
In the picture, VP and VEP are the velocities of the planet and
Unlock document

the epicycle, respectively. Note that the planet has a greater velocity than the epicycle.
We can see how the model accounts for retrograde motion. The picture shows the planet in two
different positions on its epicycle. For the planet on the outer part of its epicycle, an observer on
Earth will see it move toward the upper left since the epicycle and planet velocities add—this is
prograde motion. When the planet is on the inner portion of its epicycle, it appears to an observer
on Earth to move toward the bottom right since the planet moves faster in this direction than the
epicycle does toward the upper left—this is prograde motion.
In Ptolemy’s model, the planets, in order outward from the Earth, were the Moon, Mercury,
Venus, the Sun, Mars, Jupiter, and Saturn.
The model accounted for the motions of all seven ancient planets — but — Ptolemy had seven
parameters in his model such as the radii of the epicycle and deferent, the locations of their
centers, the speeds of the epicycle and planet. One can always fit seven things with seven
parameters. A picture of this model for a planet is shown at right.
Consider one specific prediction of the model — involves Venus.
We note that Venus is never far from the horizon in the sky — it
always close to the Sun.
Venus’ epicycle must keep pace with the Sun as the two orbit the
Earth.
From the picture, you can see that in this model, Venus is always
between the Sun and the Earth.
This means that Venus would always be in a crescent phase.
In about 1500 AD, a Polish monk Copernicus decided that things would be simpler if the Sun
were placed at the center with the Earth as a planet in orbit about it. In the Sun-centered
system, the planets in order from the Sun are Mercury, Venus, Earth, Mars, Jupiter, and Saturn.
Uranus and Neptune had yet to be discovered.
In this model, epicycles are not needed to explain retrograde
motion. In the Copernican model, the planets move more slowly
the farther they are from the Sun. Retrograde motion is caused
by the Earth catching and passing a planet as shown at right.
When the Earth is on the side of the Sun opposite Mars, we see
that an observer on Earth will see Mars move toward the upper
left, which is prograde motion. When the Earth is between the
Sun and Mars, it overtakes Mars, and Mars appears to move
toward the lower right, which is retrograde motion.
Predictions of the Sun-centered or heliocentric model about
Venus.
The picture at right shows the Sun, Venus, and the Earth. Note that, when the Earth is at the
Unlock document

upper right, Venus will appear to be a crescent as predicted by
the Ptolemaic model. But when the Earth is located at the lower
left, Venus will appear in the gibbous phase, which is impossible
in the Ptolemaic system. From the picture, you can see that
Venus goes through a complete cycle of phases.
Galileo used a telescope to observe Venus.
He saw Venus go through a complete cycle of phases!
This means that the geocentric model of Ptolemy is wrong.
It doesn’t mean that the heliocentric model is correct, only that the Ptolemy’s model is wrong.
A third model due to Tycho Brahe
In his model, the Earth is at rest orbited by the Sun and all other planets orbit the Sun.
Tycho’s model also allows Venus to go through a complete cycle of
phases, as can be seen from the picture at right.
In fact the heliocentric and Tycho’s model are the same—only
difference is vantage point.
Kepler made it his life’s work to find the description of the motions of
the planets around the Sun. He came up with three “laws”:
Kepler’s Three Laws of Planetary Motion:
Kepler’s First Law — K1: The orbit of planet about the Sun is an ellipse with the Sun at one
focus.
Before continuing — a few notes about the ellipse:
To draw an ellipse, do the following:
1. Fix the ends of a length of string to a piece of paper so that it is
loose.
2. Push a pencil against the string to make it taught.
3. Keeping the string taught as you draw on the paper will produce an
ellipse.
4. The two foci of the ellipse are the locations of the ends of the string.
In the picture, each F represents the focus of the ellipse. The symbols a and b represent,
respectively, the semimajor and semiminor axes of the ellipse. Note that, if the ellipse is
deformed into a circle, these two quantities become the same and become the radius of the circle.
The foci approach each other and become the center of the circle.
Kepler’s Second Law — K2: Planets move more rapidly when closer to the Sun in their orbits and
Unlock document