PSYC241 Midterm 2 Review
LECTURE 1: PERSUASION
Attitudes:
- Attitude: evaluation of people, objects, ideas
-Attitudes are a combination of genetics (temperament), and environment
- Cognitively based attitudes: based primarily on people’s beliefs about the
properties of the object
- Affectively based attitudes: based on people’s feelings, values, and beliefs about
the nature of the object
- Behaviourally based attitudes: based on observations of how one behaves
toward an object (ex. We don’t know how we feel until we behave in a certain
way)
- Explicit Attitudes: conscious
- Implicit Attitudes: involuntary, uncontrollable, sometimes unconscious
- Yale Attitude Change Approach: the study of the conditions under which people
are most likely to change their attitudes in response to persuasive messages,
focusing on “who said what to whom”, the source of the communication, the
nature of the communication, and the nature of the audience
oAttractiveness/expertise of speaker
oQuality of arguments, one or two sided arguments?
oAppeal to low intelligence
oAppeals for hostile vs. friendly audiences
Stages of Persuasion:
- Exposure
- Attention
- Comprehension
- Yielding
- Memory
- Due to amounts, we cannot process all of the persuasive messages we encounter
- We will process a message carefully when we are: motivated to do so, and able to do so
Central vs. Peripheral Persuasion
-Elaboration Likelihood model: a model explaining 2 ways in which persuasive
communications can cause attitude change: centrally, when people are motivated
and have the ability to pay attention to the arguments in the communication, and
peripherally, when people do not pay attention to the arguments but are instead
swayed by surface characteristics (eg. Who gave the speech)
-Central route: Message substance is most important. People paying attention and
motivated to think about argument
oExamples: logic and strength of arguments, related evidence
- Peripheral route: Superficial cues are most important. People not paying
attention to argument, so peripheral cues are most important
oExample: communicator characteristics, message length
Unlock document

Source Factors:
- Credibility:
oTrustworthiness
oExpertise
oViewed as acting against their own interests
oNot viewed as trying to persuade you
- Liking:
oAttractiveness
The “Sleeper Effect”
- Occurs when message from unreliable sources initially exert little evidence, but
later cause individuals’ attitudes to change
- Moderator: whether information that discredits the source precedes the message
Message Factors:
- One-sided vs. two-sided: moderated by knowledge of the audience
- Order of messages: primacy vs. recency effects
- Strong emotions such as fear: moderated by whether a “way out” is provided
oWill fail if overwhelming fear is created  leads to denial, loss of rational
though, defense mechanisms, etc.
oWill succeed if listener believes listening will teach him how to reduce
this fear
Recipient Factors:
- Motivation to process information
oPersonal relevance to topic
oNeed for cognition: : personality characteristic reflecting the extent to
which people enjoy effortful thinking and cognition
- Ability to process information
- Mood effects
Ego Depletion and Persuasion:
-Ego-depletion: a state in which our self-regulatory capacities are diminished
Emotions as a Heuristic:
-Heuristic Systematic Model of Persuasion: an explanation of the 2 ways in
which persuasive communications can cause attitude change: either systemically
processing the merits of the argument (central) or using mental shortcuts, such as
“experts are always right” (peripheral)
- We attribute our mood at the time to how we feel about a certain topic.
Advertisers try to elevate mood to convince us we like a product.
- When trying to change cognitively based attitudes, appeal to rational arguments.
When trying to change affectively based attitudes, appeal to emotion
Classic Persuasion Techniques:
Unlock document 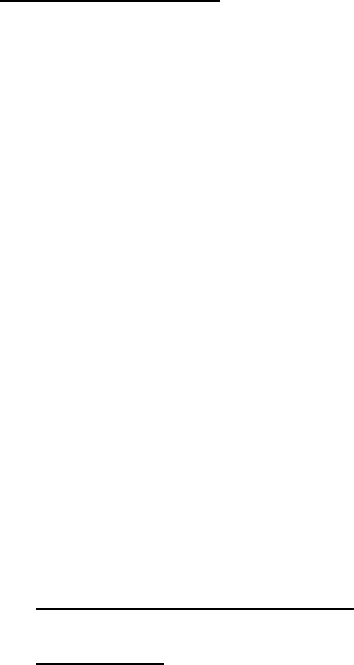 - Reciprocity: takes advantage of a powerful social norm in society - return a
favour
oDoor-in-the-face technique
oGifts (ex. Free samples)
- Commitment and Consistency: people prefer to see their attitudes and behaviours
as consistent
oFoot-in-the-door technique (start small, escalate requests)
- Social Proof: we often judge the acceptability of our own attitudes and behaviours
by using the attitudes and behaviours of others as a reference point
- Liking: We are more likely to comply with people we know and like
oAttractiveness
oBusinesses where people sell to friends (ex. Skin care)
- Authority: we are more likely to comply with people who are perceived to have
authority
- Scarcity: things that are hard to obtain are viewed as more valuable
oDon’t want to miss out on opportunity
oAssume if there’s less of something then it is better
Resisting Persuasion:
- Know and understand these techniques to resist them
- Tendency to evaluate information in a biased way – we selectively attend to
information that supports our existing attitudes
-Attitude Inoculation: make yourself immune to people’s attempts to change your
attitude by considering small doses of opposing thoughts to your own
- Be alert to product placement
- Resist peer pressure via inoculation
-Reactance Theory: the idea that when people feel their freedom to perform a
certain behaviour is threatened, an unpleasant state of reactance is aroused, which
they can reduce by performing the threatened behaviour (ex. If you’re prohibited
from ever even looking at cigarettes, you will have a strong urge to smoke to re-
gain your freedom)
LECTURE 2: CONFORMITY
Conformity:
- Changing one’s behaviour or beliefs to accord with others
- Pressure from others can be: explicit/implicit, real/imagined
Unlock document