STUDY GUIDE FOR EARTHQUAKES
AND EARTHQUAKE HAZARDS – PART II
General Study Questions - Short and Not-So-Short:
1. What are seismic waves? Describe the major types and sub-types of Seismic Waves (i.e., where
they travel, how they travel, types of matter through which they travel, their relative velocities, etc.).
When an earthquake occurs, it releases energy in the form of waves that radiate from the earthquake
source in all directions. The different types of energy waves shake the ground in different ways and also
travel through the earth at different velocities. The fastest wave, and therefore the first to arrive at a
given location, is called the P-wave. The P wave, or compressional wave, alternately compresses and
expands material in the same direction it is traveling. The S-wave is slower than the P wave and arrives
next, shaking the ground up and down and back and forth perpendicular to the direction it is traveling.
Surface waves follow the P- and S-waves.
Primary or P-waves propagate through materials in a push (compressional waves) and pull
(Dilational) type motion in the direction of travel. Since P-waves cause a change in volume, and
since all 3 states of matter resist a change in volume, P-waves can travel through all 3 states of
matter. Average velocity in the upper crust is ~6 km/s. Because they are the first to arrive at a
seismograph station after an earthquake, they are called P-waves for Primary Waves.
Shear or S-waves travel along the same paths as P-waves but only at about 60% of their velocity.
S-waves have a horizontal component of motion that vibrates perpendicular to the vertical
component of motion in the direction of propagation. S-waves only change the shape of materials
in which they travel so they can only travel through solids and cannot travel through liquids and
gases since these 2 states of matter do not resist a change in shape. S-waves cause some of the
damage during EQs. Their average velocity in the upper crust is ~3.5 km/s. Because Shear Waves
travel more slowly than P-waves and always reach any given seismograph recording station at
some time after the P-waves arrive, they are called S-waves for Secondary Waves.
Surface Waves travel only along the Earth’s surface and are called Long Waves or L-waves
because they have a long wave period, which is the time required for successive wave crests
to pass a fixed reference point. Thus, surface waves collectively are called L-waves for Long
Period Waves. Surface waves are important to planners and engineers because they cause
most of the vibrations that cause damage. There are 2 types of L-waves.
A Rayleigh wave is a seismic surface wave causing the ground to shake in an elliptical
motion, with no transverse, or perpendicular, motion.
Love Waves travel in a similar fashion to S-waves, that is, with particle motion at
right angles to the direction propagation. However, Love waves have no vertical
component of displacement. The horizontal displacement/motion produced by Love
waves is what causes most the damage during EQs.
2. How can P-wave and S-wave from one seismograph station be used to determine the distance to an
earthquake epicenter from this seismic station? Describe how seismologist geographically locate
the epicenter of an earthquake. (Review your Virtual Earthquake Exercise)
Because the P- and S-waves always travel along the same paths, but at different speeds, the lag in the
arrival of the S-wave behind the P-wave is proportional to the distance from the EQ epicenter. So the
greater the lag time or difference in arrival time between the P- and S-wave, the greater the distance to
the EQ epicenter. Thus, the distance from any seismograph station to an EQ epicenter can be
determined using Time-Distance Graphs or by solving simultaneous equations for 2 unknown variables
3. What is Earthquake Magnitude (what does it measure?), and what scale is used to measure it.
find more resources at oneclass.com
find more resources at oneclass.com
Unlock document 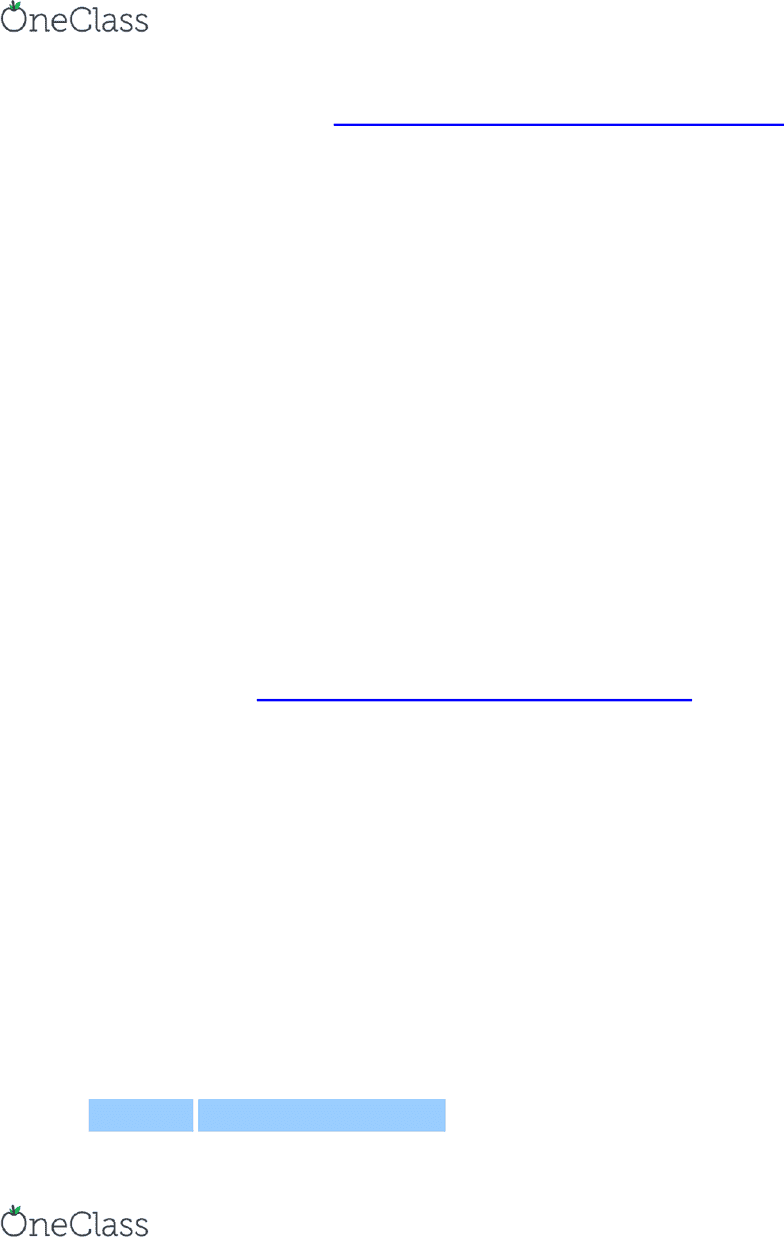 Describe how this scale works. Why are there so many Earthquake Magnitude Scales?
“Earthquake Magnitude” <http://earthquake.usgs.gov/learn/glossary/?term=magnitude>
The magnitude of an earthquake is determined from the logarithm of the amplitude of
waves recorded on a seismogram at a certain period. The Richter Scale plus the
Moment Magnitude Scale + others
Earthquake size, as measured by the Richter Scale is a well known, but not well
understood, concept. The idea of a logarithmic earthquake magnitude scale was first
developed by Charles Richter in the 1930's for measuring the size of earthquakes
occurring in southern California using relatively high-frequency data from nearby
seismograph stations. This magnitude scale was referred to as ML, with the L standing
for local. This is what was to eventually become known as the Richter magnitude.
As more seismograph stations were installed around the world, it became apparent
that the method developed by Richter was strictly valid only for certain frequency and
distance ranges. Because of the limitations of the original Richter magnitude scale,
ML, a new, more uniformly applicable extension of the magnitude scale, known as
moment magnitude, or Mw, was developed. In particular, for very large earthquakes
moment magnitude gives the most reliable estimate of earthquake size. New
techniques that take advantage of modern telecommunications have recently been
implemented, allowing reporting agencies to obtain rapid estimates of moment
magnitude for significant earthquakes. The USGS has used the Mw Scale since 2002.
4. What is Earthquake Intensity (what does it measure?), and what scale is used to measure it.
Describe how this scale works and how it can be used to reconstruct the Magnitude of
Earthquakes that occurred before 1935 (i.e., before development of the Richter Scale)
“Mercalli Scale” <http://earthquake.usgs.gov/learn/glossary/?term=intensity>
The Mercalli Scale is based on observable EQ damage. From a scientific standpoint,
the Richter scale is based on seismic records while the Mercalli is based on observable
data which can be subjective.
Thus, the Richter scale is considered scientifically more objective and therefore more
accurate. For example a level I-V on the Mercalli scale would represent a small amount
of observable damage. At this level doors would rattle, dishes break and weak or poor
plaster would crack. As the level rises toward the larger numbers, the amount of
damage increases considerably. The top number, 12, represents total damage.
The following table gives intensities that are typically observed at locations
near the epicenter of earthquakes of different magnitudes.
Magnitude / Intensity Comparison
Magnitude
Typical Maximum
Modified Mercalli Intensity
1.0 - 3.0
I
find more resources at oneclass.com
find more resources at oneclass.com
Unlock document 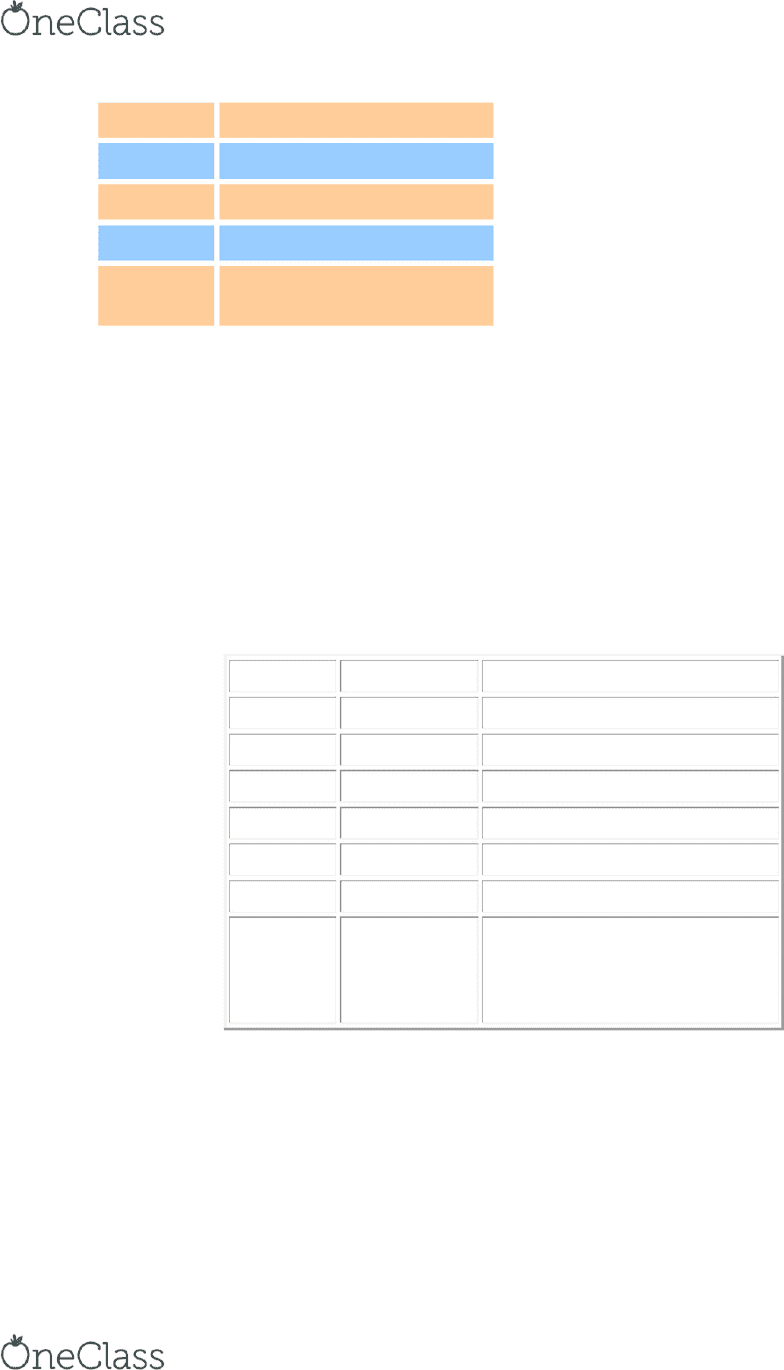 3.0 - 3.9
II - III
4.0 - 4.9
IV - V
5.0 - 5.9
VI - VII
6.0 - 6.9
VII - IX
7.0 and
higher
VIII or
higher
5. What is the difference between the magnitude and intensity scales?
Magnitude and Intensity measure different characteristics of earthquakes.
Magnitude measures the energy released at the source of the earthquake.
Magnitude is determined from measurements on seismographs. Intensity
measures the strength of shaking produced by the earthquake at a certain
location. Intensity is determined from effects on people, human structures,
and the natural environment.
6. How are Great Earthquakes and Major Earthquakes defined, and what is the annual, global
Frequency of each? Know “Major” and “Great”.
Descriptor
Magnitude
Average Annually
Great
8 and higher
1
Major
7 - 7.9
18
Strong
6 - 6.9
120
Moderate
5 - 5.9
800
Light
4 - 4.9
6,200 (estimated)
Minor
3 - 3.9
49,000 (estimated)
Very Minor
< 3.0
Magnitude 2 - 3: about 1,000 per
day
Magnitude 1 - 2: about 8,000 per
day
7. Compare and contrast Earthquake Hazards to Earthquake Risks.
<http://earthquake.usgs.gov/learn/glossary/?term=earthquake risk>
<http://earthquake.usgs.gov/learn/glossary/?term=earthquake hazard>
Earthquake hazard
Earthquake hazard is anything associated with an earthquake that may affect
find more resources at oneclass.com
find more resources at oneclass.com
Unlock document