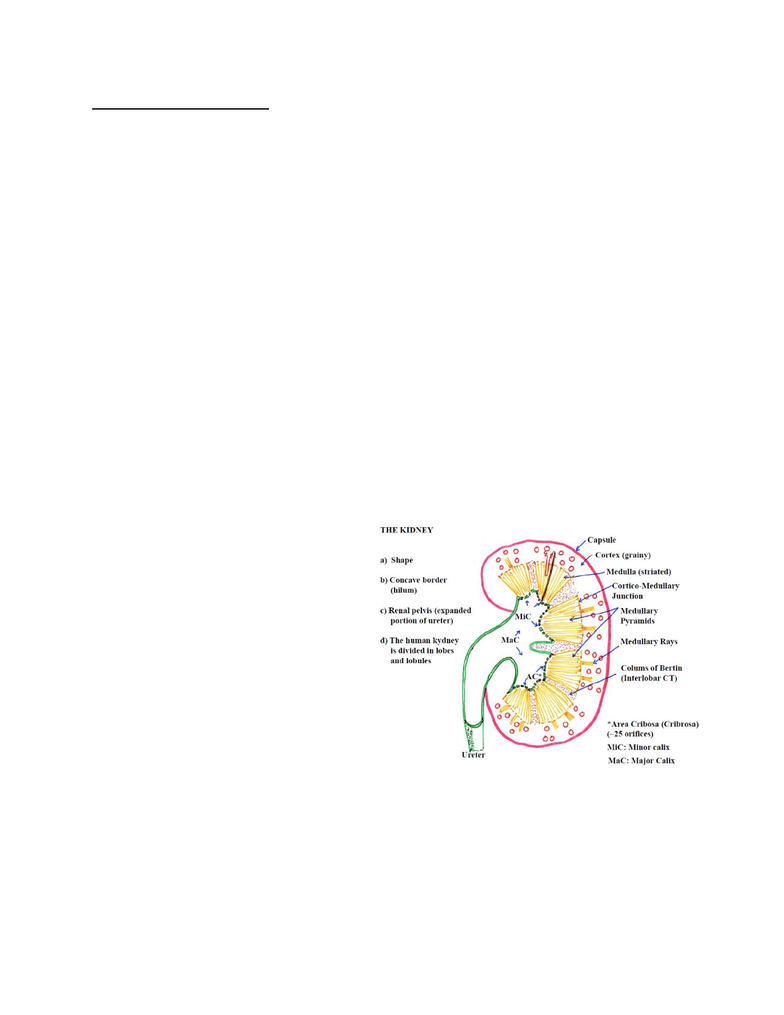 Naveen Sooknanan McGill Fall 2011
1
Urinary System (Kidneys):
The urinary system is made up of the kidneys, ureters, urinary bladder and the urethra
 In this course, we will only study the kidneys and the urinary bladder
 The urinary system contributes to:
o Excretion of metabolic waste products (such as urea)
 This is done through a filtration process, during which proteins such as
albumin are recovered
o Regulation of total body water
 Highly regulated and can vary greatly depending on how much water you
consume
o Regulation of electrolyte balance
 Retains sodium and other ions to a constant level
o Endocrine secretion of Renin and Erythropoietin
 Renin is an enzyme released into the blood which controls blood pressure
 Erythropoietin stimulates RBC production (modern name is Erithrogenin)
The kidney is shaped like a kidney bean (which was named after it)
 It has two borders:
o The concave border, called the hilium, is where the renal pelvis is located
 This structure is funnel shaped and is continuous with the ureters
 At this level, there is also the entrance of renal arteries and the exit of
renal veins
o There is a convex lateral portion
 The human kidney is big enough to
be divided into lobes and lobules
o A mouse’s kidney is
unilobar
 The capsule is made of tough dense
irreg. CT rich in collagen fibers and
fibrocytes
o Very eosinophilic, easy to
identify
 The cortex is located immediately
below the capsule, and looks grainy
due to the presence of tiny little
spheres
 The cortico-medullary junction is
where the cortex stops and the next part, the medulla begins
 The medulla is a striated structure which have straight ducts travelling all the way to the
draining points (called calices, or calix in singular)
o Each lobe contains a group of straight ducts making the a medullary pyramid (a
mouse only has one pyramid)
o The medulla can also be separated further into lobules
 Medullary rays are projections of the medulla into the cortex
o They have the exact same structure as the upper medulla, as we will look at later
Unlock document 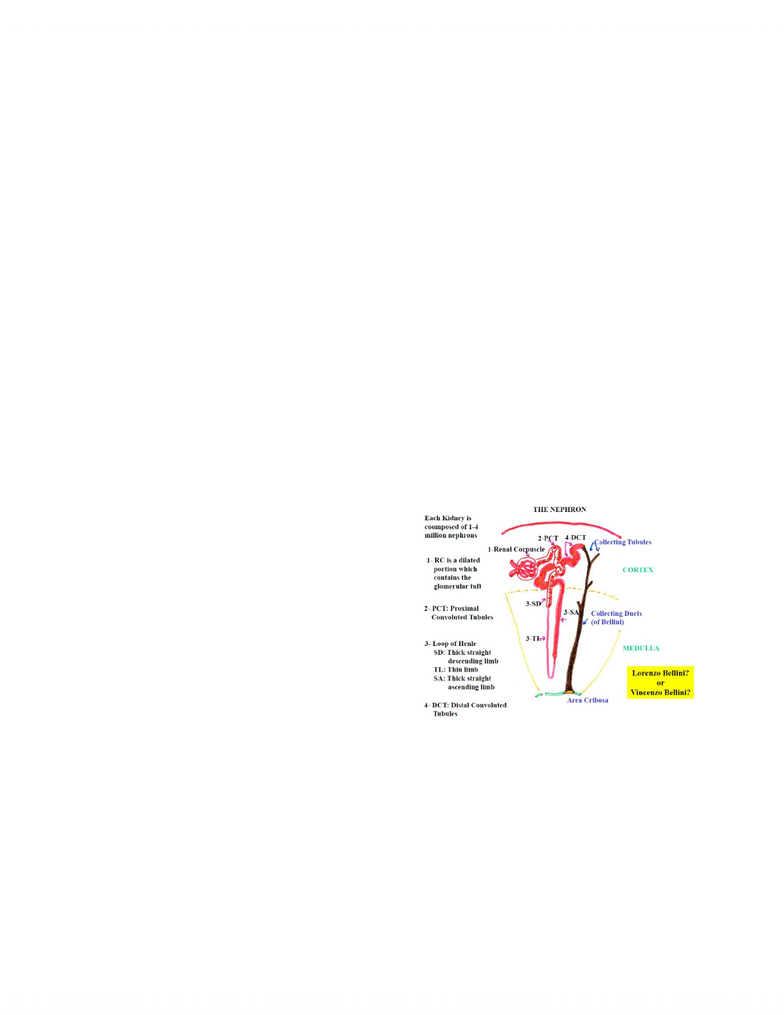 Naveen Sooknanan McGill Fall 2011
2
 Dividing each lobe are columns of Bertin, which is the equivalent of interlobular CT in
other structures (it is made of CT)
 All of these medullary pyramids drain through openings known as the area cribosae
o There are around 25 of these regions in each renal pyramid
 These collections then get dumped into the minor calix, which are small pockets in front
of the AC
 These minor calices then converge to form the major calix, which turns into the renal
pelvis
o The renal pelvis is continuous with the ureters
 The ureter will go all the way to the urinary bladder
The main filtration unit of the kidney is called the nephron, and is located between the medulla
and cortex
 Each kidney is comprised of 1-4 million nephrons
 Blood comes into the nephron and gets filtered into urine through a series of tubules
o In the cortex, blood enters the renal corpuscle, which is a dilated tuft, and gets
filtered
o Still in the cortex, the urine then enters the proximal convoluted tubule (PCT)
which is very twisted
o The PCT then penetrates into the medulla and straightens out, becoming the
straight thick descending limb (SD)
 It is structurally identical to
the PCT except it’s straight
and in the medulla
o Next, the SD turns into the thin
limb, which does a U turn in the
lower medulla and starts coming
back up (towards the cortex)
o The TL then turns into the straight
thick ascending limb (SA) which
penetrates back into the cortex
o The SA, once in the cortex,
becomes the distal convoluted
tubule, which is very twisted like
the PCT
 The SA and DCT are structurally the same as well
o The SD, TL and SA together are known as the loop of Henle (because of the U
turn)
 This point marks the END of the nephron, from here on, the urine is no longer inside the
nephron
o The DCT is connected to a collecting tubule, which collect urine from different
nephrons and merge as they penetrate into the medulla
o In the deeper medulla, the collecting tubules begin to thicken and become
collecting ducts of Bellini
Unlock document 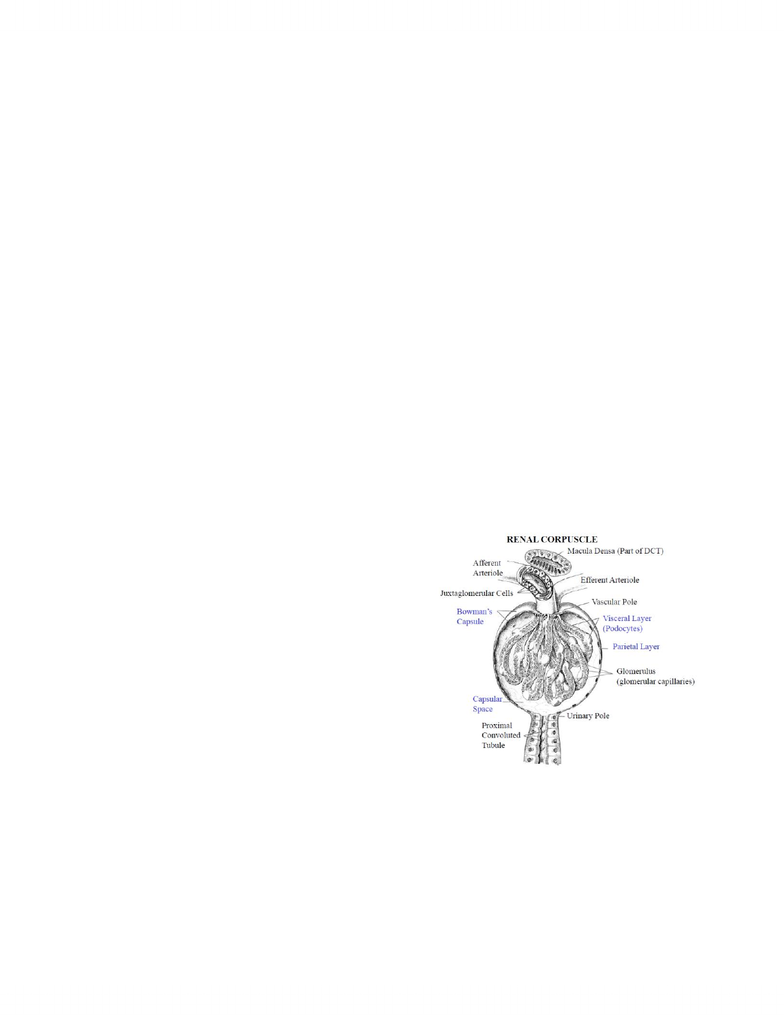 Naveen Sooknanan McGill Fall 2011
3
o The CD of B then drain into the area cribosa, through the minor and major
calices, and to the ureters
The renal corpuscle consists of a double walled-epithelium containing a glomerular tuft of
capillaries
 The unit is surrounded by a capsule called Bowman’s capsule, which contains two layers:
the inner visceral layer and the outer parietal layer
o These layer do not touch, the space between them is known as Bowman’s space
or capsular space
o The visceral layer has cells called podocytes with a lot of indentations and
processed, whereas the parietal layer is similar to a simple squamous epithelium
resting on a BM
 The parietal layer is also surrounded by reticular fibers (type III collagen)
 The squamous cells and podocytes are embryologically related
 The renal corpuscle is polarized (not electrically). This just means is has two different
poles: the vascular pole and the urinary pole
o The vascular pole contains afferent and afferent arterioles
 Like the portal venule in the liver, these BVs are functional (get filtered)
and are not for nutrition
o The afferent arteriole contains a region of modified SMCs in the media which are
called juxtaglomerular cells
 These cells are located very close to the renal corpuscle and secrete Renin
 They are endocrine cells
o The efferent arteriole leaves the renal corpuscle, still at the vascular end, with
clean blood that has been filtered
 The afferent arteriole enters the capsule and
divided into 5 or more capillaries, called
glomerular capillaries
o All of the capillaries together is
referred to as the glomerulus
 Eventually, all of these capillaries will merge
into the efferent arteriole
 The filtered produce then travels out of the
urinary pole, which marks the beginning of
the PCT
o The PCT is lined with 1 layer of
columnar cells with microvilli
pointing into the lumen
o The microvilli are immobile and have
absorptive functions
 In a section of the renal corpuscle, the DCT can also be seen as it comes back from the
medulla
o The DCT contains a thickened portion called the macula dense
 This region is located just as the vessel leaves the corpuscle, and is made
of thin columnar cells as opposed to the normal cuboidal ones
Unlock document