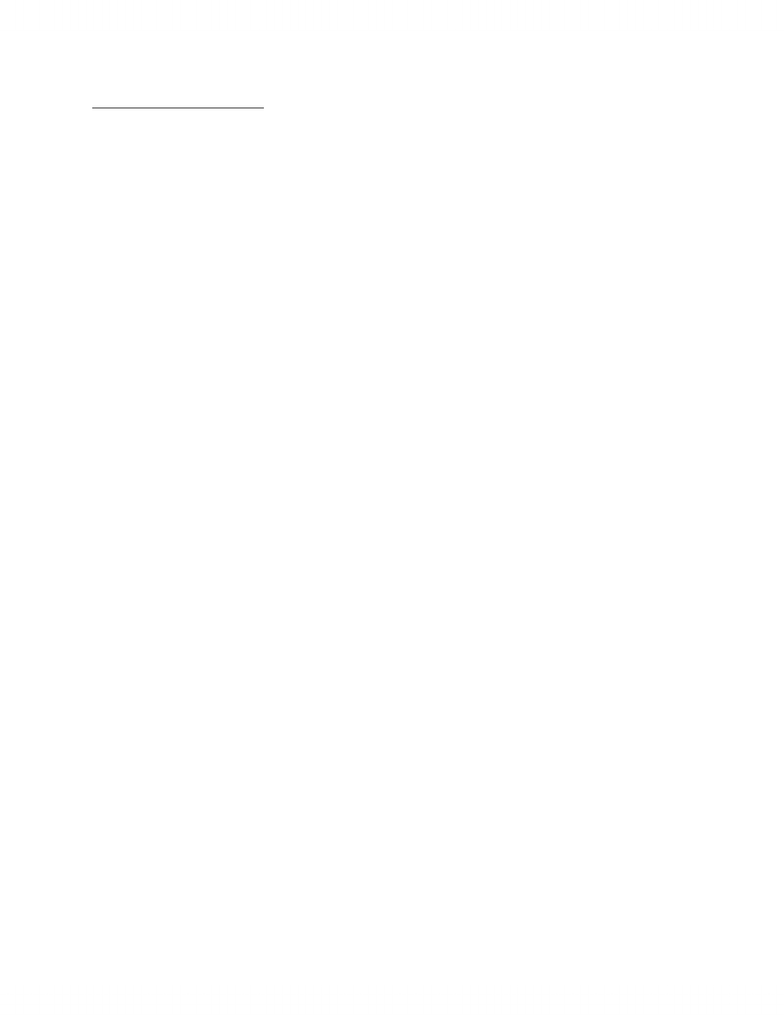 Lecture 1: Neurocytology
Neurons are very active in protein synthesis and packaging. They also have complex shapes
and dynamic polarization (where different parts of the neuron perform different functions).
Primary receptive surfaces are the cell body (soma) and dendrites. The soma is where
transcription/translation occur, and has Nissl bodies (rough ER) and lots of Golgi. The soma
may receive synapses.
Dendritic fields of different neurons can vary dramatically, though they’re usually pretty
small, less than 100 microns. Their patterns results from genetic and environmental input,
and varies with what they need to sample.
Dendritic spines have a head and neck, and they receive excitatory input. They are dynamic
structures, coated with actin and myosin to help this. Big spines are most stable. All neurons
have spines in development. Their purpose is to provide specificity for the kinds of synapses
formed. Spine density changes, decreasing with age for example.
Spines are somewhat isolated from the parent dendrite, both electrically and chemically.
They can “remember” or reflect what they were like a few seconds ago, and play a role in
memory and learning.
At the base of a spine is a ribosomal rosette, which makes proteins unique to the spine.
The axon hillock and initial segment of the axon (which is never myelinated) integrate
passive signals and can produce an AP due to a high density of VG Na channels. Most axons
in the CNS send signals to 1000s of other cells via collateral branches.
Each neuron gives off 1 axon.
Variability in synaptic NT and NT receptors allows for the complexity of the brain.
Glycoprotein in the cleft help guide NTs to receptors. The post-synaptic cell has a high
density of transmembrane proteins. Many are ionotropic (ion channel; short and fast) or
metabotropic (GPCR; long and slow) NT receptors.
VG Ca channels and Ca influx lead to fusion of synaptic vesicles. The closer a synapse is to
the axon hillock, the bigger its effect. Generally, excitatory stimuli are on dendrites and
inhibitory stimuli are on the cell body. Axo-axonic synapses are very powerful and also rare;
they are often inhibitory. Most synapses are axo-dendritic or axo-spinous, though many are
axo-somatic.
Inhibitory axo-somatic synapses tend to occur at the cell body because the driving force for
Cl into the cell is near zero at -70 mV. So, it must be nearer to the axon hillock to be
effective.
Dendro-dendritic synapses occur between dendrites, with one having NT vesicles, etc. It
does not require an AP to get synaptic transmission.
Electrical synapses also occur at gap junctions. Connexin proteins form connexons (pores).
These are too simple to be used too much.
All transcription, translation, packing and processing occurs in the soma. Most neurons
won’t divide, so have lots of heterochromatin. They are extremely ribosome dense for lots of
protein production. Free ribosomes are also in the dendrites, and cluster at the base of spines
to make proteins concentrated there. Rough ER forms Nissl bodies. Robust Golgi and
mitochondria are also present.
The axon hillock has some kind of gate (mechanism unknown) that prohibits ribosomes from
entering the axon. Protein for the axon is made in the cell body and delivered by axoplasmic
transport.
1
Unlock document 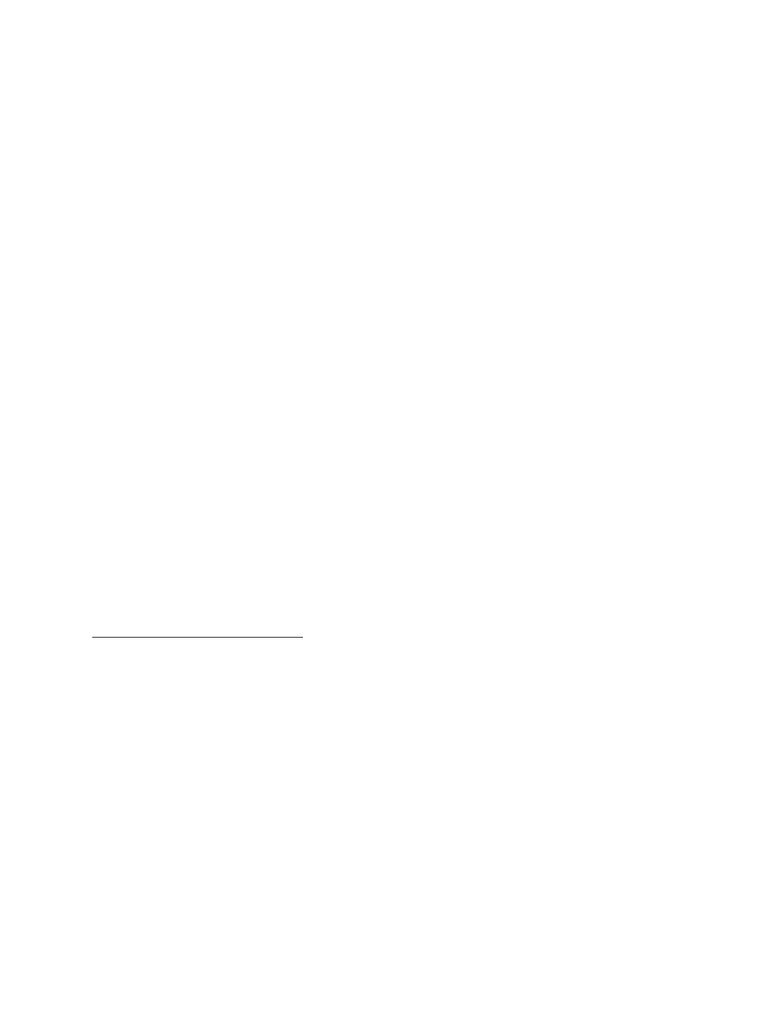 The neuronal cytoskeleton contributes to neuronal shape and transport in axons/dendrites.
Microtubules (α,β tubulin, MAPs) primarily determine morphology. Neurofilaments
(intermediate filaments, especially the heavy variety due to charged side bridges) determine
the diameter of the axon (more of them makes it bigger, cuz they’re constantly spaced).
Axoplasmic transport: microtubules form with their + ends at the axon terminal. Thus, +
end directed motors like kinesins act for anterograde transport. And, - end directed motors
like dyneins act for retrograde transport.
Ion distributions (esp. via the Na/K pump) help maintain the resting potential. Signaling is
mediated by changes in ion permeability. Kout, Nain, Clin, Cain < Kin, Naout, Clout, Caout
Na channels are excitatory, K or Cl channels are inhibitory
Eion = voltage at which there is no net flow of the ion across the membrane.
Driving force = Electrical gradient + Chemical gradient
Channels are selective for charge, but can be variable in ion specificity (most cation channels
exclude Ca though).
Myelination increases the membrane resistance, which increases the length constant. Greater
diameter decreases internal resistance, which also increases the length constant.
The length constant (distance before a depolarization will decrease in magnitude by a factor
of e – or decrease by 2/3) is influenced by membrane resistance and internal resistance.
The time constant (the time it takes to get to reach a level of 63% Vmax for the influx of a
given number of ions) is a function of resistance and capacitance. τ = RC, where R = internal
resistance. Membranes are very thin, so neurons have very high capacitance. C = Q/V. Na
ions that flow in must first discharge the capacitance (negatives on the inside of the axon)
before than can build up voltage, and that takes time. Decreasing the capacitance, by
myelination for example, will decrease the time constant and make you turn those charges
into voltage faster.
So myelination both increases the length constant (by increasing membrane resistance) and
decreases the time constant (by decreasing capacitance) to speed up conduction.
Synaptic potentials are integrated to decide if an action potential should be fired.
Lecture 2: Membrane Potential
Nain = 15 mM, Naout = 150 mM, ENa = +64
Kin = 155 mM, Kout = 5 mM, EK = -86
Cain = .0001 mM, Caout = 1 mM, ECa = +116
Clin = 5 mM, Clou = 110 mM, ECl = -78
Nernst Equation: Eion = 60 log ([ion]out/[ion]in)
Current flow through ion channels: Iion = gion (Vm – Eion)
Electrical signals may be conducted passively/decrementally, or actively/regeneratively.
Active propagation only happens when voltage gated channels are present.
Passive spread: A depolarization of ∆V0 falls off at a distance x as: ∆Vx = ∆V0 (e-x/λ). λ is
the length constant, and is defined as: λ = √(rm/ri).
ri is internal resistance of a dendrite. Ri is the specific resistance of dendroplasm. ri
= Ri/(πr2).
rm is the membrane resistance for a dendrite, with Rm being the specific resistance of
membrane in general. rm = Rm/(2πr).
2
Unlock document 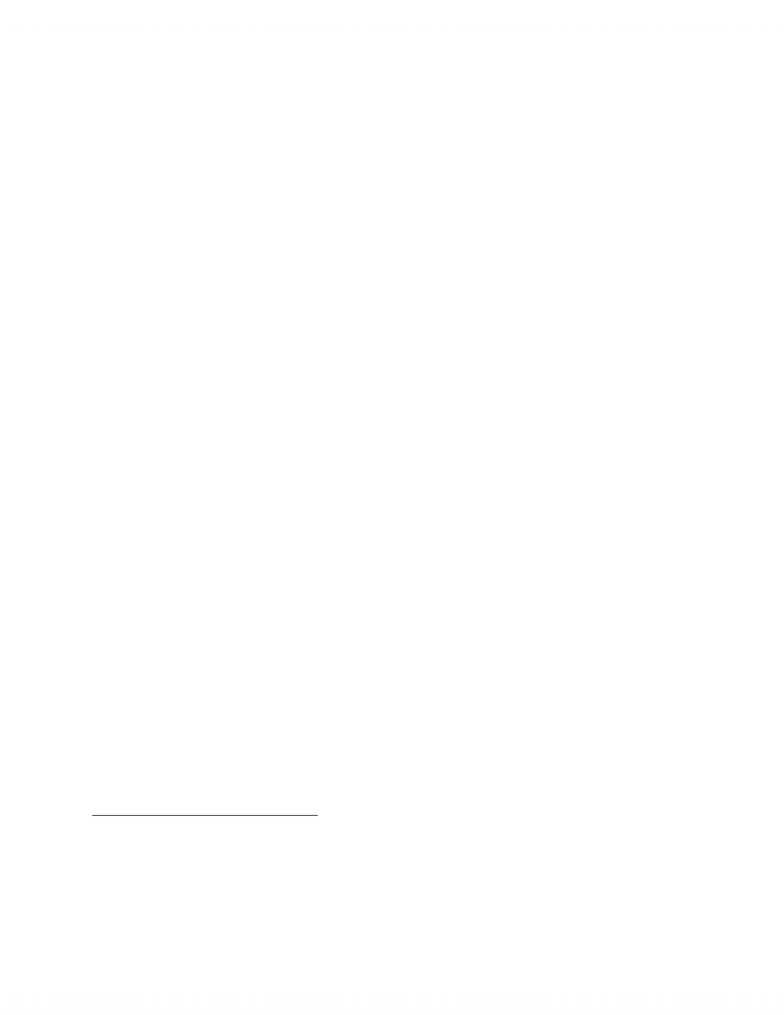 As the radius goes up, the internal resistance shrinks faster than the membrane resistance. So
bigger axons have relatively less internal resistance, and will have a longer length constant
and conduct farther.
Capacitance is directly proportional to area, and it is inversely proportional to thickness.
Think of it as how many charges it’ll take to produce a certain voltage, but more charges will
go to the membrane (and not count) if it is broad or thin.
Membranes act like capacitors in addition to resistors. Once you first open a channel, the
ions go to charge the membrane like a capacitor as well as run along the membrane. When
the capacitor is fully charged, then they just proceed through the membrane or dendroplasm.
For a resistor and capacitor in parallel (like a membrane), the voltage change produced by a
constant current at time t is given by: Vt = Vmax(1 – e-t/τ). τ is the time constant, a measure of
how long it takes to charge the membrane up to 63% of it’s maximum potential. It is
measured as: τ = rmcm, where cm is the capacitance per unit length. It affects how long it
takes voltages to be propagated along a dendrite.
All of this basically has consequences for the temporal and spatial summation that must
occur at the axon hillock. Signals must be strong enough at that distance to meet the
threshold, which is influenced by the diameter of their dendrites, and they must arrive at the
same time to sum appropriately.
The axon hillock must be depolarized to ~ -55 mV to open VG Na channels and trigger an
AP. This represents the point at which enough VG Na channels open to make the net current
(Na vs. K) inward and initiate a positive feedback loop of Na influx.
VG Na channels start as deactivated, they activate (open), inactivate (close and can’t open
yet), then return to a deactivated state. The maximum rate for this is about 1 millisecond, so
you max out at around 1000 firings per second for a neuron.
Inactivation and VG K channels return the cell to resting potential. These channels remain
open and are responsible for the After Hyperpolarization stage.
Hodgkin and Huxley figured out lots of what was going on with channels by doing
experiments with squid giant axons. They used voltage clamps, which set a neuron at a
constant voltage, and can measure the currents necessary to maintain that. Depolarization
first caused negative current (Na+ in), then positive current (K+ out).
Removing Na from the medium eliminated the negative current of Na influx. Looking at the
difference of: complete curve – (complete curve w/out Na) = curve for effects of Na.
Finally, they added TEA to block K, and saw just the negative current of Na influx. They
thus showed that Na and K were causing these changes.
With axons of higher caliber, the resulting increased length constant allows the wave of
depolarization to spread farther ahead and conduct the AP faster. Myelin decreases
capacitance and increases rm to decrease the time constant and allow the axon to charge
faster.
Lecture 3: Synaptic Transmission
Katz knew APs are associated with Na influx and K efflux, so wanted to know if they were
responsible for NT release. They placed pre and post-synaptic electrodes, using signals from
the post as a measure of NT release. Depolarize pre cell, and even if you block Na with TTX
and K with TEA, still get post-synaptic potential. So Na and K not responsible for NT
release, though it is apparently voltage dependent.
3
Unlock document