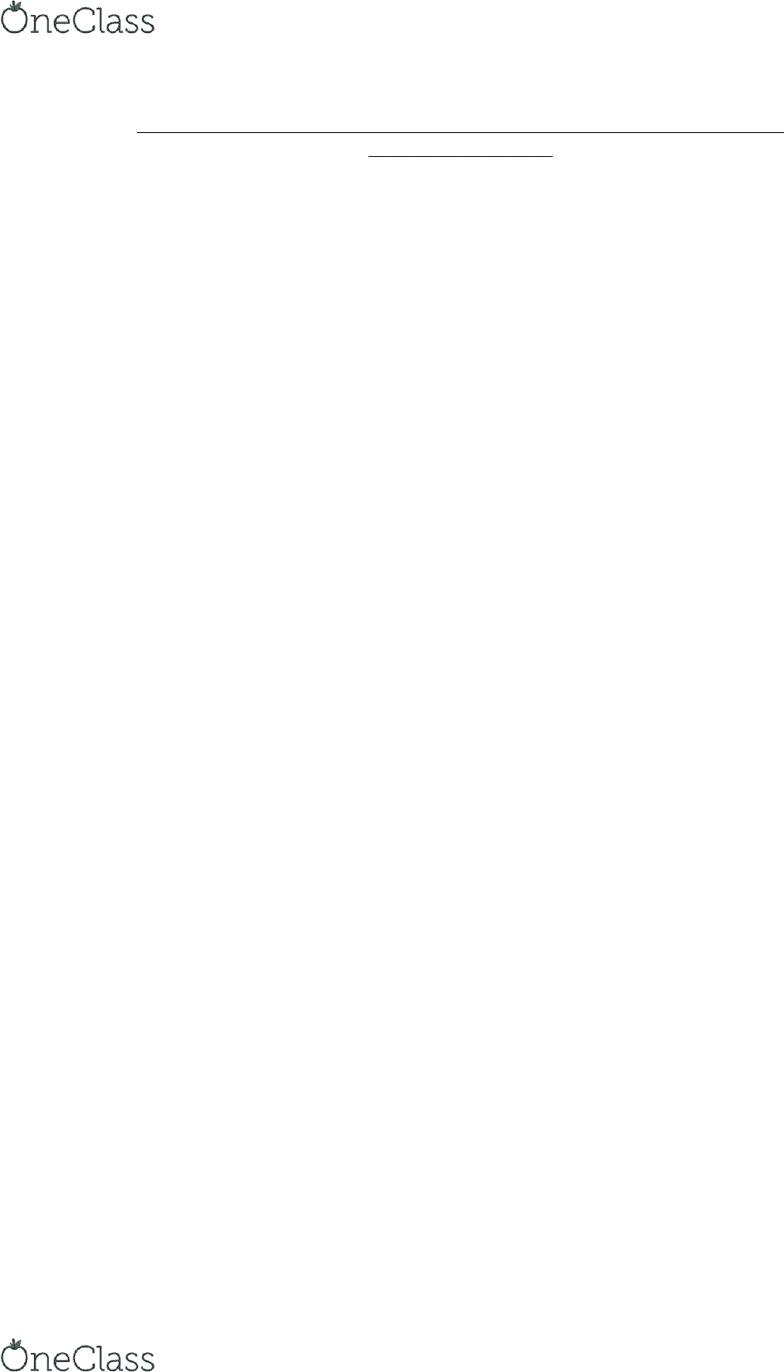 Lecture 8: Disposable Bodies Colonialism and Indigenous Women in North
America/Turtle Island
•
Key Readings:
● Bear, Shirley. “You Can’t Change the Indian Act?” Women and Social Change:
Feminist Activism in Canada. Pages 198-220.
● Smith, Andrea. “Anticolonial Response to Gender Violence.” Conquest: Sexual
Violence and American Indian Genocide. U.S.: South End Press, 2005. Pages 137-
175.
The Indian Act was/is…
● “a federal legislation which governs the day to day lives of more than 350 000
Indigenous people of whom there are approximately 200,000 residing on ‘Indian
Reserves’” (Bear 198).
● “The Indian Act, legislated in 1869, explicitly defines Canada’s original inhabitants,
not by blood or familial association, but by marriage. Until 1985, ‘Indian status’ was
determined by a patrilineal system” by a person’s relationship to a male (Bear 198).
The Indian act and gender roles
● “When a woman born of ‘Indian status’ married a non-status man, she lost her
original status and was never albe to regain it even if she divorced or widowed. Along
with losing her status, a woman lost her band membership, her property, inheritance,
burial, medical, educational and voting rights on the reserve” (Bear 198).
● “However, when a non-status female married a status male, ‘Indian status’ was
conferred upon her” (198).
The Indian act and matriarchal/patrilineal societies
● Bear traces the ways that the Indian act was discriminatory towards women and
favoured indigenous men by allowing indigenous men to marry non-status women
and NOT lose their status but indigenous women who married a non-status person
lost her status. (see example p. 207-208).
● What does this say about the Canadian state’s conception of men and women at the
time? And the imposition of European gender ideologies on indigenous peoples?
First Nations women’s roles and stature prior to the Indian Act
● In 1742, Joseph-Francois Lafitau, a French Jesuit missionary and ethnologist wrote
about his observations of the role of women in the “Iroquois”-speaking nations:
○ “Nothing is more real, however, than the women’s superiority. It is they who
really maintain the tribe...In them resides all the real authority: the lands, the
fields, and all their harvest belong to them; they are the soul of the councils,
the arbiter of peace and war….they arrange the marriages,; the children are
under their authority; and the order of succession is founded in their blood”
(Woolsey).
● Today patriarchal gender roles have been globalized through popular media and
globalization.
Women of the Tobique Reserve and the 100 mile walk
find more resources at oneclass.com
find more resources at oneclass.com
Unlock document

● In 1985 the Canadian Parliament passed Bill C31 which ended more than 100 years
of legislated sexual discrimination against Indigenous women ( Bear 199).
● As a result of the activism of a group of women from Tobique Reserve in New
Brunswick who were at the forefront of that struggle. (199)
● Bear’s article showcases excerpts of their stories which outline the horrors of the
residential school system as well as the everyday racism that indigenous people
have faced in schools, unemployment, poverty, poor housing etc. More can be read
in a book called Enough is Enough.
Andrea Smith: the Inter-connections between colonization and sexual violence
● Sentiment in indigenous communities that “we do not have time to address
sexual/domestic violence in our communities because we have to work on ‘survival’
issues first” (137-138)
● Smith argues that these things are interconnected
○ “It has been through sexual violence and through the imposition of European
gender relationships on Native communities that Europeans were able to
colonize Native peoples in the first place”
○ Indigenous women have suffered under colonial policies in Canada ranging
from sexual violence to forced sterilization (138)
○ Intimate relationship between colonization and gender violence
● “We must develop anticolonial strategies for addressing interpersonal violence that
also address state violence” (139) at the same time.
Criminal justice system as a problematic means of reducing sexual and domestic
violence
● Time frame of Smith’s study is after the 1994 passage of the Violence Against
Women Act (VAWA)
○ First federal US law to recognize the severity of gender-based violence.
○ Supports and funds initiatives to address issues of domestic violence, sexual
assault and stalking against women.
○ Authorizes programs to improve living conditions for women and other
marginalized groups, as well to provide training to law enforcement and
judiciary systems in addressing and dealing with cases of gender-based
violence. (Legal Momentum)
● In Canada, the Liberal Government is planning to launch a national violence against
women strategy in 2017 (Status of Women Canada)
Criminal justice system as a problematic means of reducing sexual and domestic
violence
● Impact of VAWA
find more resources at oneclass.com
find more resources at oneclass.com
Unlock document

○ Agencies and strategies combating violence against women dependent on
state funding
○ Strategies tend to be state friendly (hire more police, give longer sentences to
rapists, pass mandatory arrest laws etc.) (Smith, 139).
○ Native people are per capita the most arrested, most incarcerated, and most
victimized by police brutality of any ethnic group in the U.S. (Smith, 139).
● Figure: Comparison of Percentage of Federally incarcerated Indigenous compared to
percentage of overall Canadian population 2013. Data from Office of Correctional
Investigator.
Traditional Restorative Justice Methods
● Smith explores the efficacy and inefficacy of the “restorative justice movement” as a
community-based justice program, where the focus is on community healing in
groups.
● She points out the inefficacy of these alternative justice models mostly because
indigenous communities have internalized European gender ideologies (which tend
to promote the over-sympathy with the rapist or perpetrator and tends to blame the
victim).
● Experimentation with the combination of restorative justice with incarceration
○ Criminal justice system imprisons people of colour and poor people
disproportionately.
Criminal justice system as a problematic means of reducing sexual and domestic
violence
● The problem with the criminalization “solution” is the fact of police brutality on the
reserve.
● “racial profiling” (147)
● Police violence in Canada against indigenous women (see page 149 for example)
○ See also Shirley Bear’s article “You Can’t Change the Indian Act?” for stories
from indigenous women.
● “Crime rates often have more to do with fluctuations in employment rates than with
increased police surveillance or increased incarceration” (144)
● Indigenous people overrepresented in prisons and jails.
○ According to a 2000 study, Native women make up only 8 percent of the
women’s population in South Dakota, but 35 percent of the state’s women’s
prison population. For Native peoples generally, incarceration rates are high
[…]” (149) (see Smith p 150 for more statistics)
● “The prison system is not equipped to address a violent culture in which an
overwhelming number of people batter their partners, unless we are prepared to
imprison hundreds of millions of people” (154)
● “institutionalized violence” (154)
● Violence against women is connected with other forms of oppression like anti-
immigration policies and deportation. (155).
Criminalization & the “prison industrial complex” (PIC)
● The prison system has become profitable and part of the corporate structure of North
America.
find more resources at oneclass.com
find more resources at oneclass.com
Unlock document