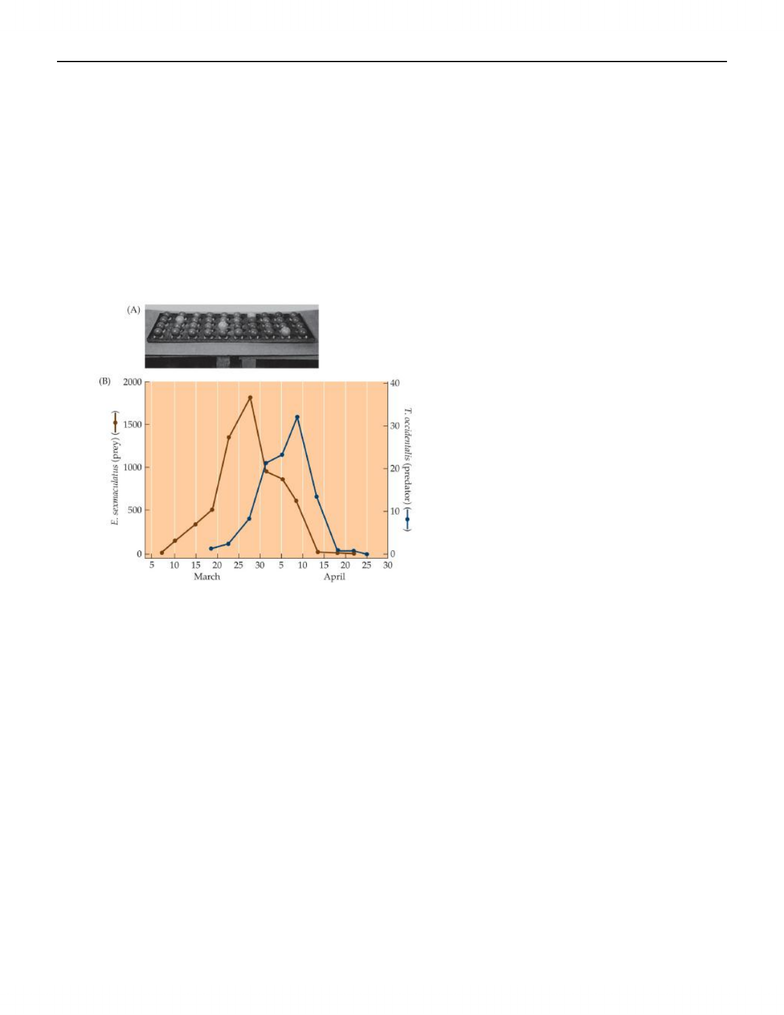 1
BIOB50Winter2012 Lecture 21: Metapopulations and Metacommunities (End of Chapter 10 and End of Chapter 12)
Metapopulations
o Many species have a metapopulation structure in which sets of spatially isolated populations are linked by
dispersal
o for many species, areas of suitable habitat exist as a series of favourable sites that are spatially isolated from one
another
o meta = about itself in Greek  in science it is translated as “something for something”, example: meta-
analyses= an analisis of analyses
Huffaker and Mites and The Orange Ecosystem
o Figure 12.21 In a Simple Environment, Predators Drive Prey to Extinction
o
o Part A: Huffaker constructed a simple lab environment to test for conditions under which predators and prey
would coexist and produce population cycles. He placed oranges in a few positions in an experimental tray to
provide food for the herbivours six spotted mite; the remainder of the positions contained inedible rubber balls
o Part B: when a predatory mite was introduced into the simple environment, it drove the prey to extinction,
causing its own population to go extinct as well  the prey and predators dispersed from orange to orange in
the trey, when meeting, the predator ate all the mites, and so the mites went extinct, eventually causing the
predator to become extinct
o Figure 12.22 Predator-Prey Cycles in Complex Environment – Huffaker modified the simple lab environment to
create a more complex one that aided the dispersal of the prey species, but hindered the dispersal of the
predator species. Under these conditions, predator and prey populations coexisted, and their abundances
cycled over time  In late July (first panel), the densities of both prey and predator were high; About a month
later, the densities of both had fallen (second panel); and then they started to rise again in October (3rd panel)
Unlock document 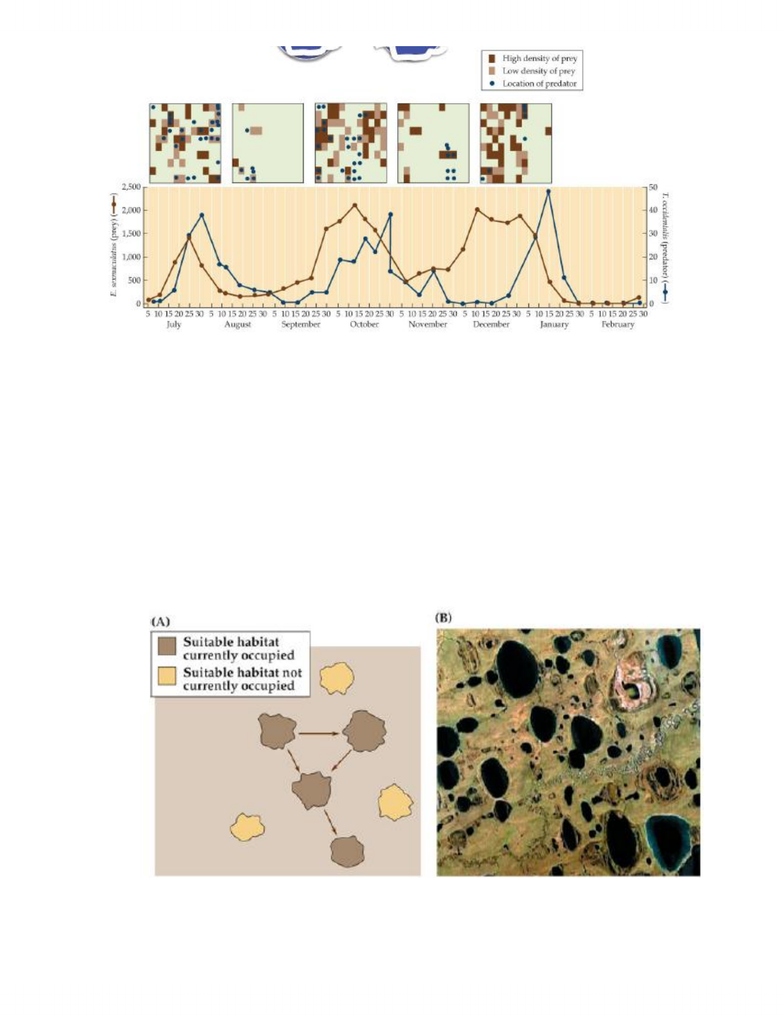 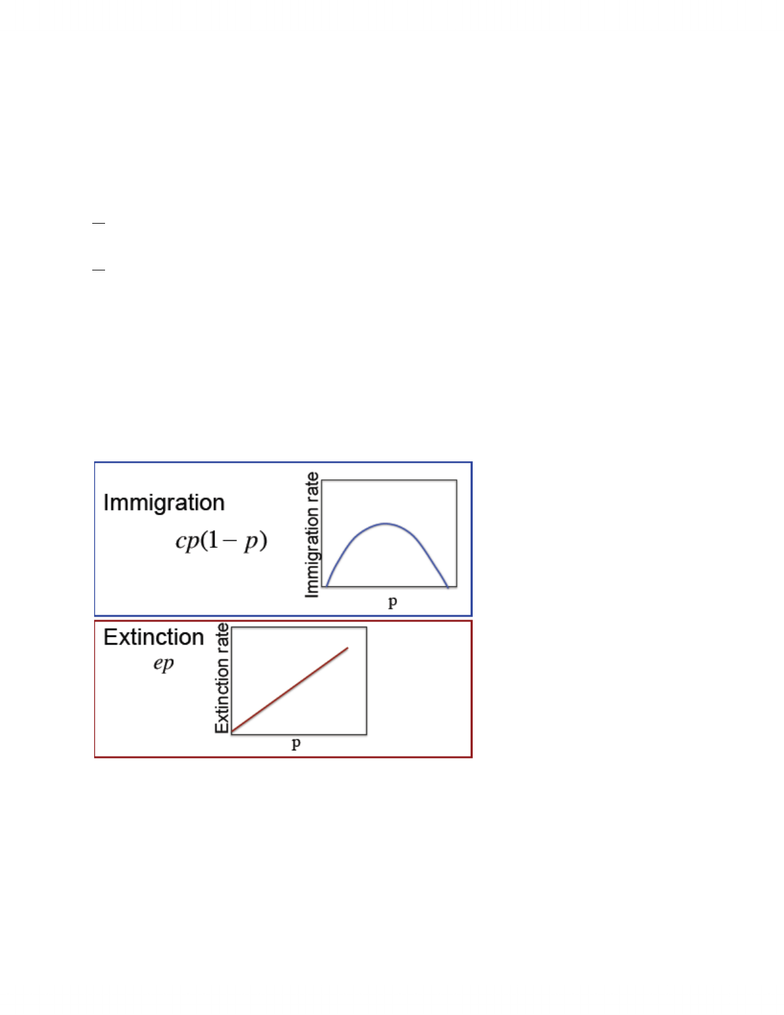 3
o Part A: seven patches of suitable habitat for a species are diagrammed , 4 of which are currently
occupied, and 3 are not. The area outside the 7 patches represents unsuitable habitat  members of
the species occasionally will disperse from one suitable habitat to another
o Part B: Satellite image that shows a group of lakes in Alaska which are sometimes connected to one
another by temporary streams that form after snow melts or after periods of heavy rainfall
Levins Model: 1969
o Proportion (p) of patches occupied can be predicted
o 
    
o Extinction and colonization of habitat patches can be described by the following equation:
o 
   
o p= proportion of habitat patches that are occupied at time t
o c= patch colonization rate
o e= patch extinction rate
o the equation makes several assumptions
o 1) there is an infinite number of identical habitat patches
o 2) all patches have an equal chance of receiving colonists (distance)
o 3) all patches have an equal chance of extinction (size)
o 4) once a patch is colonized, its population increase to its carrying capacity more rapidly than the rates of
colonization or extinction (allows population dynamic within patches to be ignored)
o
o At equilibrium:
Unlock document