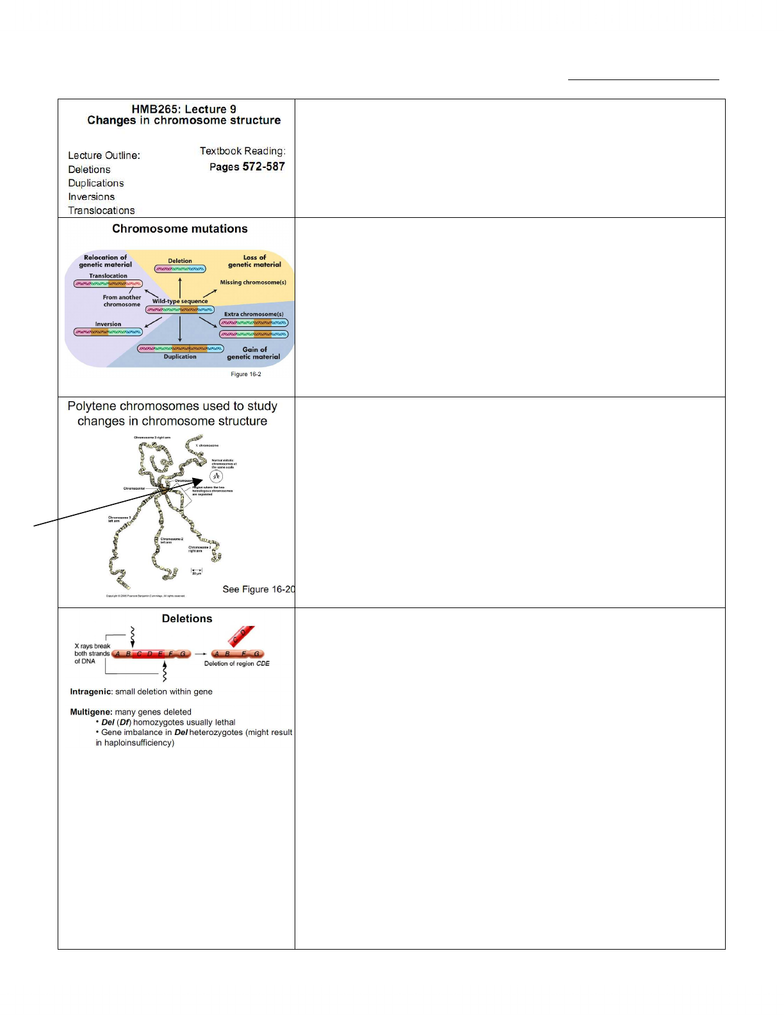 Tuesday, February 3, 2009
-Today’s lecture carries on talking about chromosomal abnormalities but
specifically, changes in the structure of chromosomes as opposed to last
lecture which was on changes in chromosome number.
-Here we see a representation of the many different types of changes in
chromosome structure that you can have. We will go through these in the
lecture.
-Here you have the wild-type sequence which is the sequence you’d
normally find in a population. You can have different types of changes.
For example, one section can be deleted or alternatively, one section can
be duplicated. And presumably, both of those will have some kind of
phenotypic changes although not always.
-As well, there’s translocation. Notice now that there’s an extra bit from
another chromosome. So presumably, the blue part would be exchanged
out and a new pink part is added in. Translocation is relocating genetic
material or moving pieces from one part to another.
-There’s also inversion as well which is the change in the order of genetic
material. So, in the example, the brown & the green pieces are swapped.
-When people are studying this kind of thing, it helps to have model
organisms to look at. It helps to have chromosomes that you can readily
see.
-1 type of chromosome that can be easily seen are these polytene
chromosomes found in the salivary glands of Drosophila. Normal size
chromosomes would be something like the small bubble to the left but
these polytene chromosomes are gigantic. They arise because there’s
duplication of the DNA but no actual division of the DNA into the 2 cells
so you get these large cells with these large chromosomes that you can
actually visualize under a microscope.
-Another benefit of polytene chromosomes is that they have a banding
pattern that’s specific for each chromosome so it allows you to identify
regions on the chromosome.
-In deletion, a piece of the DNA is taken out.
-You can imagine different ways that this can occur. For example, x-rays
can cut double-stranded DNA. And you can see that this red chunk can
be removed and you’ll end up with a deletion. Those deletions could be
relatively small within a gene (intragenic) or they could be really large.
We’ve talked about the idea of small deletions within a gene earlier so
we will focus now on these large deletions and the implication of those.
-Large deletions could conceivably remove several genes or maybe a big
chunk of chromosome. These large multigene deletions, if they’re in the
homozygous state, in other words, if both copies of that chromosome
have this deletion, then those are usually lethal because you’re losing
genes, you’re losing the products of those particular genes that are being
deleted. These things can be called Del for deletion or Df for deficiency.
In other words, it’s either deleted or deficient.
-In the case of a heterozygote, meaning that there is 1 chromosome with a
big deletion and 1 normal chromosome, then it depends on the genes that
are missing. In some cases, that won’t be a problem b/c the other copy of
those genes will take over and produce enough products. And that would
be an example of haplosufficiency; all of the genes that are deleted are
haplosufficient in the sense that you only need 1 copy.
-But, in other instances, there would be a situation of haploinsufficiency
www.notesolution.com
Unlock document 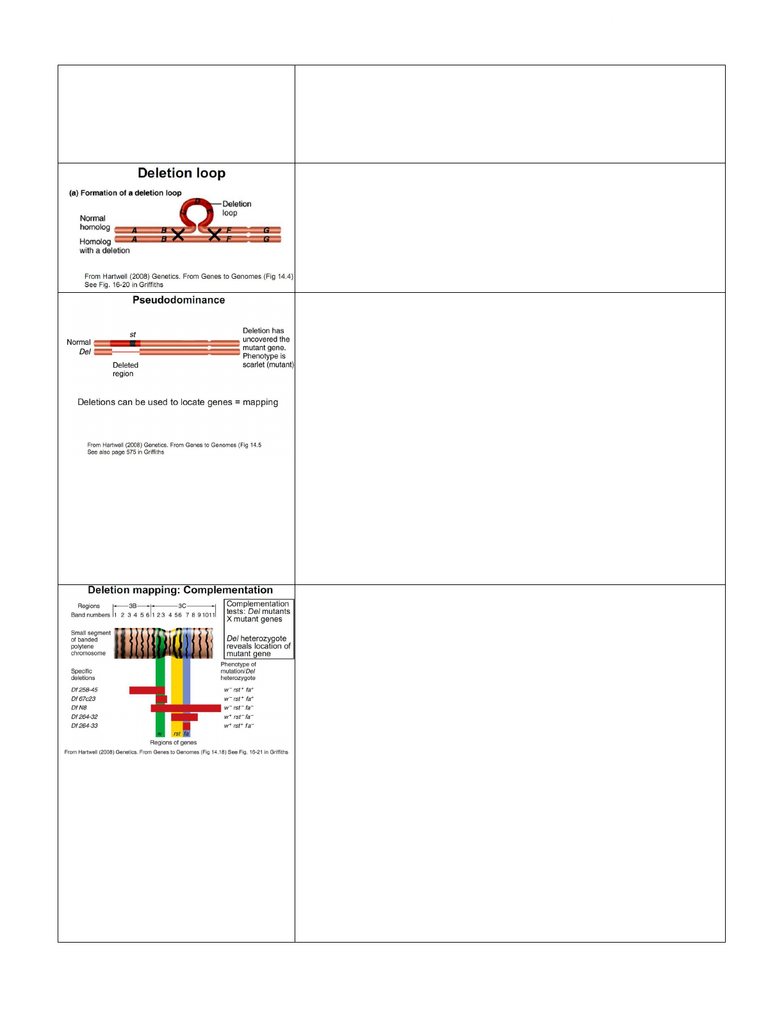 meaning that the wild-type chromosome cannot produce enough product
to maintain normal function. In that case, you’d have a situation where
you might see a phenotype in the heterozygous state or it could be
potentially lethal.
-It really depends on the genes that are deleted on what phenotype you’re
going to see.
-During meiosis when crossing-over is occurring, you can observe
situations where you have homologous pairing and you can visualize so-
called deletion loops. This region is not base-pairing with this deficient
chromosome because it’s missing this section here and you can observe
that with these polytene chromosomes or in other circumstances.
-If you had a situation where you had any kind of organism that had these
chromosomes then you have the following scenario. For example, let’s
say we have a deleted chromosomes on this region here & a chromosome
that’s pretty much normal except there’s a mutation in a particular gene.
-Normally, you’d have to have 2 copies of the mutation to see the
phenotype (or mutation). But, in this circumstance, you see the mutation
even with only 1 copy present b/c the corresponding part on the other
chromosome is missing so we’re not supplying a wild-type gene to
counteract it. So in this circumstance, you’d have 2 types of mutations: a
deletion and a recessive mutation – one that’s not normally seen in a
heterozygous state but is viewed because you’re missing this region right
here. This idea is called pseudodominance. The mutation appears to be a
dominant mutation meaning that you only need to have 1 copy of it to see
the phenotype and that happens in this special circumstance where you
have this deleted region here.
-So the deletion has uncovered the mutation gene here which is indicated
by the st and the phenotype (this is an example of Drosophila) would be
scarlet, which is a mutant in eye colour.
-Keeping that concept in mind, scientists have used this idea to figure out
a way to map where genes are located.
-The idea with this one is that you can take certain mutants that you know
have deleted regions. So you can get a series of mutants (you know what
the deletions are) and as well, you can get another series of mutants that
have a recessive mutation in a given gene. So you have two bits of info.
-For ex., if this were a chromosome right here (you can see that it’s a
polytene chromosome) it has allowed us to identify the deletion mutants
that have regions missing & those are represented by these numbers. So
Df meaning deletion mutants and these particular numbers right here.
The red bars indicate the part of this wild-type chromosome that’s
missing in these deletion mutants.
-You can take those deletion mutants – a whole panel of them – and you
can cross them with flies that have mutations in genes that you know are
somewhere in this region but you’re not entirely sure exactly where. So
you know that there are certain genes within this region – actually, you
might not even know that – but let’s just say that we do. And the genes
are indicated by these particular letters (on the far right) and there are 3
different genes. You take flies that are mutant in these genes and you
cross then and you look to see what the phenotype is of the progeny.
-When you think about this, you can start to imagine different kinds of
scenarios. So let’s say we already know that the order of the genes on the
www.notesolution.com
Unlock document 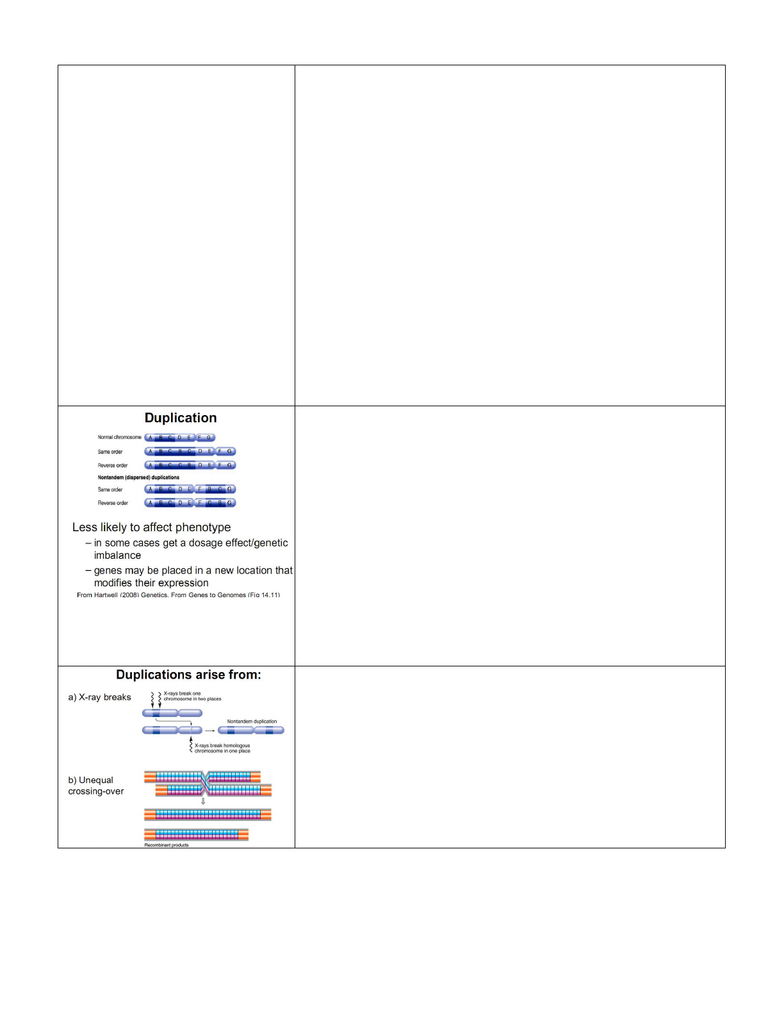 chromosome is like this and these are the different regions. You can see
that the w gene is found right around here and what this means is if we
mate any of the flies (these deletion mutants) with a fly that is mutated in
this gene, then the mutation is going to be revealed in these crosses where
there is a w- but it won’t be revealed in the crosses with these guys. The
reason why is because these ones have this wild-type region of the gene
and therefore, they have the wild-type gene and therefore you don’t see
the mutation in that gene. For this to work, you have to visualize a
difference between the wild-type gene & the mutant allele. By doing that
& looking to see what the phenotype is of all these different crosses,
people have worked out the position of the w gene. This is called deletion
mapping.
-Let’s look at another ex., let’s look at this region right here – the fa gene
which is located here. We know it’s located here because the mutant
phenotype indicated by the fa- (- means mutant and + means wildtype) we
observe that in all of these crosses where we have these particular
deletions right here. Notice that we observe wild-type for the fa gene
when we have these crosses right here (the 1
st two from the top). And
that’s the idea of deletion mapping.
-This could or could not be lethal depending on the genes that are
deleted.
-In the case of duplication, we have different types of duplications.
-Here would be the normal chromosome. The duplication could happen
in the same order or it could be even in the reverse order.
-You can have different types of duplication shown here as well. So non-
tandem duplications where you have a region here that’s been duplicated
here. They can be duplicated in tandem. In other words, side by side or
on a different part of the chromosome.
-Less likely to affect phenotype unless you have a gene product that if
it’s made in double the amount, it causes a problem. So if there’s some
sort of gene imbalance, you would have a problem otherwise you
wouldn’t see any mutant phenotypes.
-Another possibility is that if we take these genes away from this location
or we duplicate them & put them here. We might put them into a region
that’s highly transcribed & near a strong promoter & therefore we would
get much more transcription than normal so that could also influence the
phenotype.
-Can get duplication from:
a) Sometimes you would have an X ray break from 1 chromosome that
would then get inserted into another chromosome that already had a
copy. And if this 1 were passed on, then the progeny would have both
copies of that particular region.
b) Or, in the case of meiosis where there’s crossing over of homologous
chromosomes, you can have unequal crossing over. This was shown
previously, where you have a repetitive sequence that’s increased in 1 of
the chromosomes and decreased in another.
www.notesolution.com
Unlock document

Today"s lecture carries on talking about chromosomal abnormalities but specifically, changes in the structure of chromosomes as opposed to last lecture which was on changes in chromosome number. Here we see a representation of the many different types of changes in chromosome structure that you can have. We will go through these in the lecture. Here you have the wild-type sequence which is the sequence you"d normally find in a population. For example, one section can be deleted or alternatively, one section can be duplicated. And presumably, both of those will have some kind of phenotypic changes although not always. Notice now that there"s an extra bit from another chromosome. So presumably, the blue part would be exchanged out and a new pink part is added in. Translocation is relocating genetic material or moving pieces from one part to another. There"s also inversion as well which is the change in the order of genetic material.

3. Mutations that affect chromosome structure include all of thefollowing EXCEPT

: A. duplication. B. deletion. C. inversion. D. translation. E.Actually, all of these are mutations that affect chromosomestructure.

4.Duplications can have all of the following effects EXCEPT

: A. providing material for genetic variation and innovation. B.looping out of chromosomes during meiosis. C. novel phenotypes dueto dosage variation. D. suppression of crossing over. E. Actually,all of these can be effects of duplications.

7. Unequal crossing over often leads to

8. Aneuploidy includes all of the following EXCEPT:

9. While anueploidy is a change in the number of chromosomes,polyploidy is: