by OC1325406
School
York University
Department
Nursing
Course Code
NURS 3524
Professor
Mavoy Bertram
Lecture
5
This preview shows pages 1-3. to view the full 12 pages of the document.
1
HH/NUR 3524 6.0: Individuals and Families in Child and Mental Health Settings WEEK 5
HH/NUR 3524 6.0
Psychiatric & Mental Health Nursing For Canadian Practice
CONTENT COVERED
• Mental Health, Psychotic Disorders, Schizophrenia, Substance Use, Concurrent Disorders
REQUIRED READINGS
• Chapter 20, 21, 26, 33
Schizophrenia and Substance Use
What is Schizophrenia?
• Complex biochemical brain disorder affects a person’s ability to determine what is reality and what is
not
• Treatable brain illness
• Affects thinking, mood, behaviour
• Can impact all aspects of life…work, school, family, social
• 1996 total direct cost ~ $2.35 billion
Symptoms of Schizophrenia
• affected by delusions
o fixed false beliefs that can be terrifying to the person experiencing them
• hallucinations
o sensory experiences, such as hearing voices talking about them when there is no one there
• social withdrawal and disturbed thinking
Schizophrenia is
• Psychosis is the defining feature, but a universal definition of ‘psychosis’ does not exist
• A narrow definition “is restricted to delusions or prominent hallucinations, with the hallucinations
occurring in the absence of insight into their pathological nature” (DSM-V, 2013)
Diagnostic Criteria for Schizophrenia
• Criterion A – presence of two of the following for at least one month
o Delusions
o Hallucinations
o Disorganized speech
o Grossly disorganized behaviour
o Negative symptoms
• Criterion B- social or occupational impairment
• Criterion C- six-month duration of disturbance
• Criterion D & E- exclusion of diagnosis
o Not due to a mood disorder
o Not due to substance use
o Not due to a medical condition
Who is Affected? Not on the test
• 1 person in 100
• Men=Women
• Men usually develop illness earlier than women
• Onset late teens or early 20’s, most often in the 16 to 30 year age group

2
HH/NUR 3524 6.0: Individuals and Families in Child and Mental Health Settings WEEK 5
HH/NUR 3524 6.0
Childhood Schizophrenia
• Early onset grave for the life course of the child
• Symptoms include: Seeing or hearing things that don't exist (hallucinations), especially voices, having
beliefs not based on reality (delusions), lack of emotion, emotions inappropriate for the situation, social
withdrawal, poor school performance, decreased ability to practice self-care, strange eating rituals,
incoherent speech, illogical thinking, agitation
• Treatment hard to find
• NOT Autism or Asperger’s syndromes
• Affects 2 in 1000 children
• Risk factors:
o Genetic characteristics; Gestational and birth difficulties
• Believed to be the result of altered development of the central nervous system
• can result in severe emotional, behavioral, health, and even legal and financial problems
Causes of Schizophrenia
• No one knows for certain
• Biological
• Genetics
• Stress-vulnerability model
• strong evidence of important inherited factors
• Briana
o https://www.youtube.com/watch?v=_vYQ6pbJt2k
Physiologic Diagnosis of Schizophrenia
• part of the brain that governs thought and higher mental
functions behaves abnormally in persons with schizophrenia
• MRI show the same area in the brain of some people with
schizophrenia appears either to have deteriorated or not to
have developed normally
• CAT scans show that the fluid-filled spaces within the brains
of people with schizophrenia tend to be larger than those in
people without the illness
Substance Use and Schizophrenia
• People with schizophrenia often use alcohol or other drugs
• 80% of people with schizophrenia will abuse substances at some point in their lives
• Nicotine dependence most common form of substance use
• People with schizophrenia smoke about 3X the rate of the general population
• Substance use can reduce the effectiveness of antipsychotic medication
• Symptoms of schizophrenia may worsen when amphetamines, cocaine, PCP or marijuana is used
Phases of Schizophrenia
• Prodromal (Beginning)
o loss of interests
o withdrawal 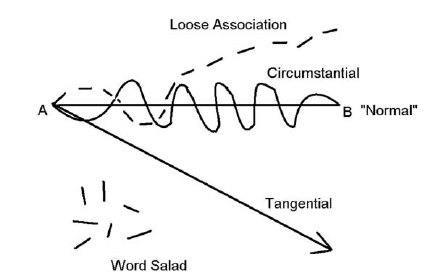