In this chapter, we study speed, velocity, and acceleration for motion in one-dimension. Things that have both a magnitude and a direction are called vectors. For 1d motion (motion along a straight line, like on an air track), we can represent the direction of motion with a +/ sign. = going left always! va = 10 m/s vb = +10 m/s. Objects a and b have the same speed s = |v| = +10 m/s, but they have different velocities. If the velocity of an object varies over time, then we must distinguish between the average velocity during a time interval and the instantaneous velocity at a particular time. X = xfinal xinitial = displacement (can be + or ) University of colorado at boulder distance traveleddspeed, s=,units are m/s or mph or km/hr ortime elapsedt change in positionxaverage velocity = v change in timet fi21fi21xxxxxvttttt .

A common graphical representation of motion along a straight line is the v vs. t graph, that is, the graph of (instantaneous) velocity as a function of time. In this graph, time is plotted on the horizontal axis and velocity on the vertical axis. Note that by definition, velocity and acceleration are vector quantities. In straight-line motion, however, these vectors have only a single nonzero component in the direction of motion. Thus, in this problem, we will call the velocity and the acceleration, even though they are really the components of the velocity and acceleration vectors in the direction of motion, respectively. Here is a plot of velocity versus time for a particle that travels along a straight line with a varying velocity. Refer to this plot to answer the following question.

What is the average acceleration of the particle over the first 20.0 seconds?

Object A collides on a horizontal frictionless surface with an initially stationary target, object X. The initial and final velocities of object A are shown. The final velocity of object X is not given.

a). At an instant during the collision, is the net force on object A zero or non-zero? 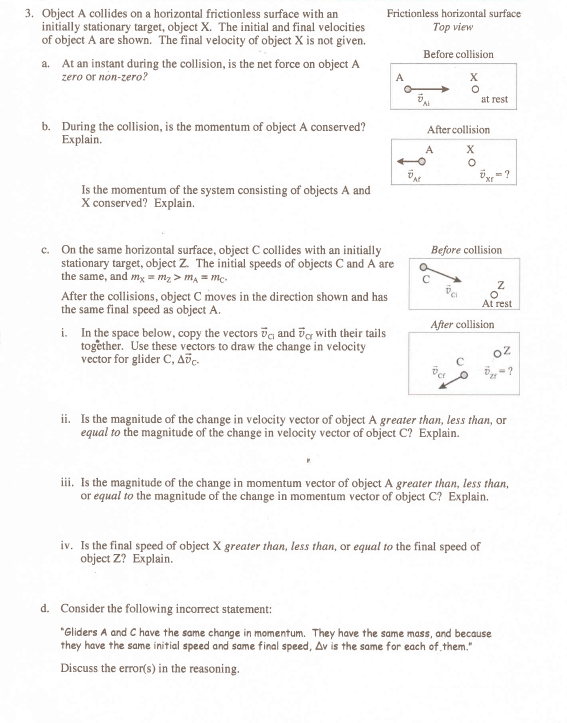