FINAL EXAM CHAPTER SUMMARIES
Chapter 4
The first full-time police force was created in London in 1829 by Sir Robert Peel in response to
increasing fear of crime and disorder associated with the Industrial Revolution. He also
introduced the concept of community police stations. In contrast to the local watchmen who
preceded them, the new police were to be proactive rather than reactive and were to engage in
crime prevention activities.
The early municipal police forces generally had a three-part mandate:
● (1) to police conflicts between ethnic groups, and between labourers and their employers;
● (2) to maintain moral standards by enforcing laws against drunkenness, prostitution, and
gambling; and
● (3) to apprehend criminals.
The Levels of Policing
Policing in Canada is carried out at several levels: federal, provincial and territorial, municipal,
and First Nations.
The RCMP is a federal police force, yet about 60 percent of its personnel are involved in
contract policing—that is, they serve as provincial, territorial, and municipal police officers
under agreements between the RCMP and the provinces or territories
Provincial Police
There are three provincial police forces in Canada: the Ontario Provincial Police (OPP), the
Sûreté du Québec (SQ), and the Royal Newfoundland Constabulary (RNC). They enforce
provincial laws and the criminal code.
Municipal police officers enforce the Criminal Code, provincial or territorial statutes, and
municipal bylaws, as well as certain federal statutes, such as the Controlled Drugs and
Substances Act within a city’s boundaries.
Aboriginal police officers generally have full powers to enforce, on reserve lands, the Criminal
Code, federal and provincial statutes, and land bylaws. The Supreme Court has held that First
Nations police constables in Ontario have “territorial jurisdiction” that is not confined to the
territorial boundaries of the reserve
Police Peacekeeping
RCMP officers, along with their provincial and municipal counterparts, are involved in a variety
of international peacekeeping activities.
Private Security Services
find more resources at oneclass.com
find more resources at oneclass.com
Unlock document 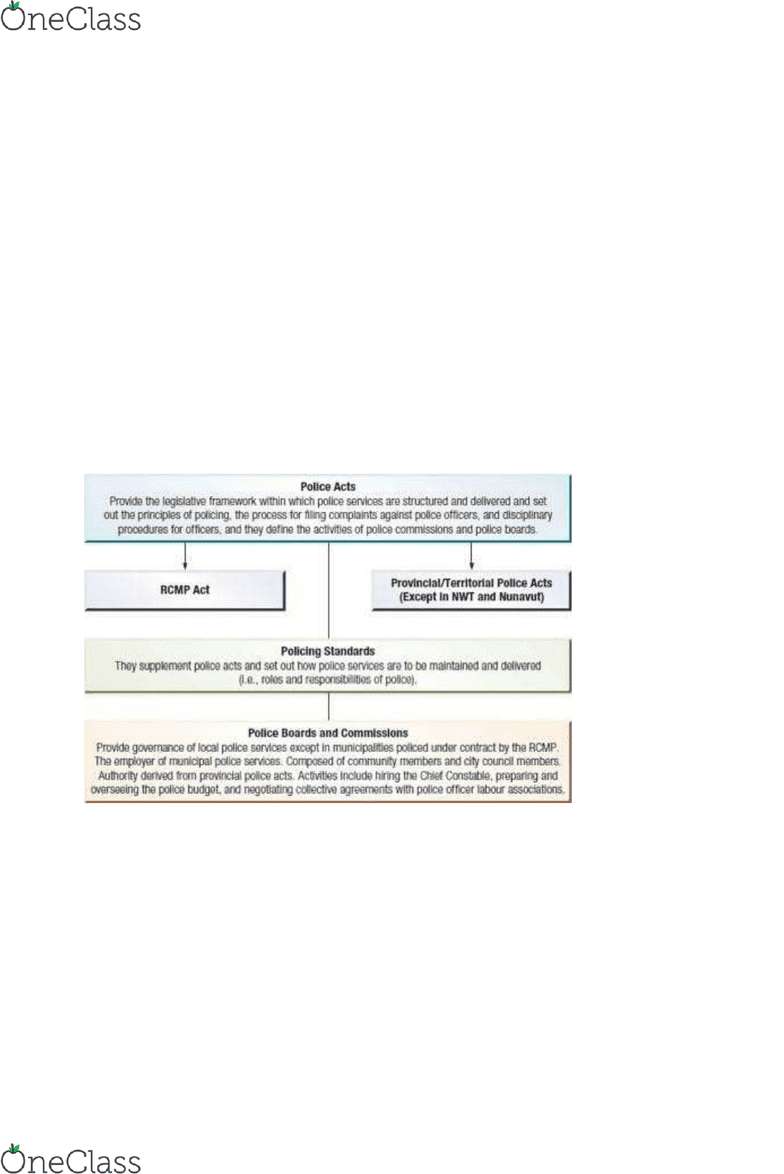 Recent years have seen exponential growth in private security, which is now providing services
previously performed by provincial and municipal police services. There are two main types of
private security: security firms that sell their services to businesses, industries, private
residences, and neighbourhoods; and companies that employ their own in-house security officers.
Private security officers can arrest and detain people who commit crimes on private property.
Recent court cases suggest that private security personnel must adhere to the provisions in the
Charter of Rights and Freedoms only when making an arrest
The Law Reform Commission of Canada has identified four key values that form the framework
within which to understand police work in Canadian society:
●Justice: the requirement that the police maintain peace and security in the community
while ensuring that individuals are treated fairly and human rights are respected.
●Equality: all citizens are entitled to policing services that contribute to their feelings of
safety and security.
●Accountability: the actions of police services, and police officers, are subject to review.
●Efficiency: policing services must be cost-effective.
Traditionally, the police role was classified into three major categories:
●Crime control. Responding to and investigating crimes, and patrolling the streets to
prevent offences from occurring.
●Order maintenance. Preventing and controlling behaviour that disturbs the public peace,
including quieting loud parties, policing protests, responding to (and often mediating)
domestic and neighbourhood disputes, and intervening in conflicts that arise between
citizens. It is this role of the police that is most often the subject of criticism and
investigation.
find more resources at oneclass.com
find more resources at oneclass.com
Unlock document 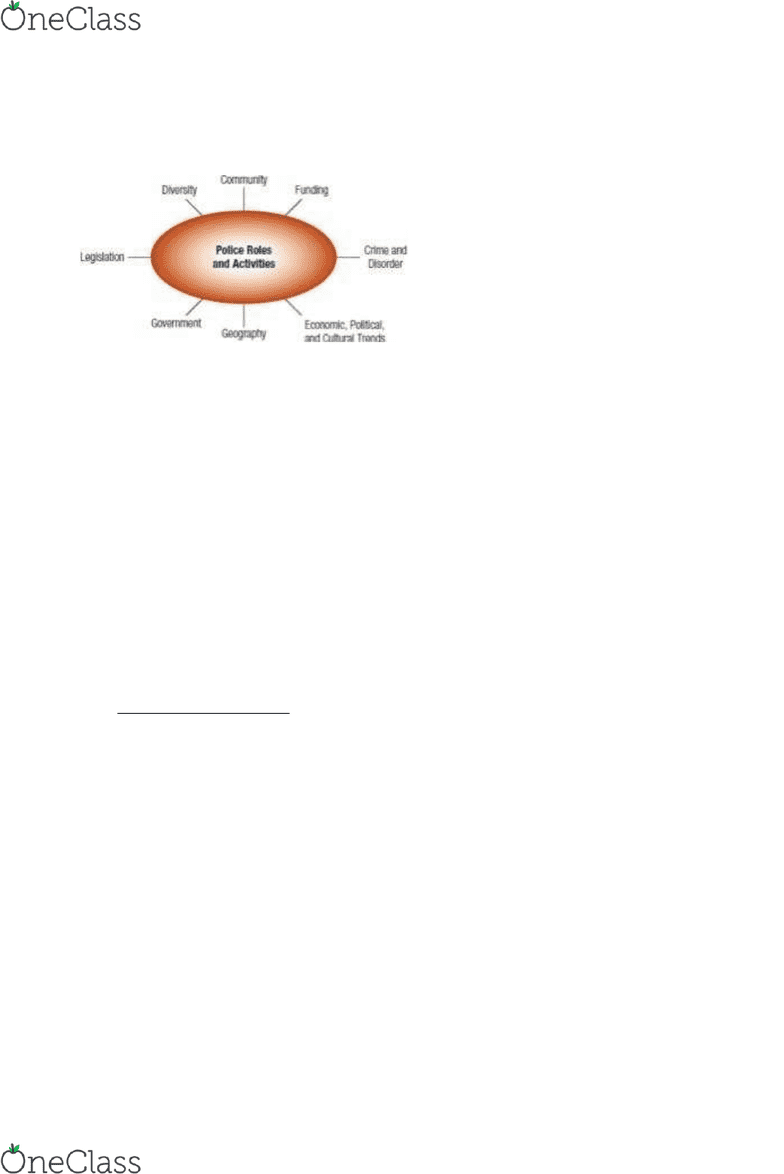 ●Crime prevention and service. Collaborating with community partners to prevent crime
and providing a wide range of services to the community, often as a consequence of the
24-hour availability of the police.
The Canadian Human Rights Act prohibits discrimination on the grounds of race, national or
ethnic origin, colour, religion, age, sex, sexual orientation, marital status, family status, disability
and conviction for which a pardon has been granted.
Policing is an expensive proposition and eats up a substantial portion of municipal budgets. A
major contributor to these costs are the salaries of police officers, which have risen steadily, often
in excess of the cost of living, other factors driving police costs include technology and the
considerable resources required to investigate more sophisticated types of criminal activity.
At various times in Canadian history, the police, particularly the federal RCMP, have been used
as an instrument of surveillance and control by the federal government. This action has been
referred to as political policing.
Careers in policing require both basic qualifications and preferred qualifications.
- The basic qualifications include Canadian citizenship, a minimum age of 19, physical
fitness, and a Grade 12 education. Also, the applicant cannot have any prior criminal convictions
or pending charges and must exhibit common sense and good judgment.
- Preferred qualifications—which are highly prized by police services—include any
knowledge of a second language or culture, related volunteer experience, a postsecondary
education, and work or life experience.
Officers who are involved in critical incidents, such as a shooting or who are exposed to extreme
violence, individual suffering, and death may develop post-traumatic stress disorder (PTSD),
an extreme form of critical-incident stress that includes nightmares, hypervigilance, intrusive
thoughts, and other forms of psychological distress.
find more resources at oneclass.com
find more resources at oneclass.com
Unlock document