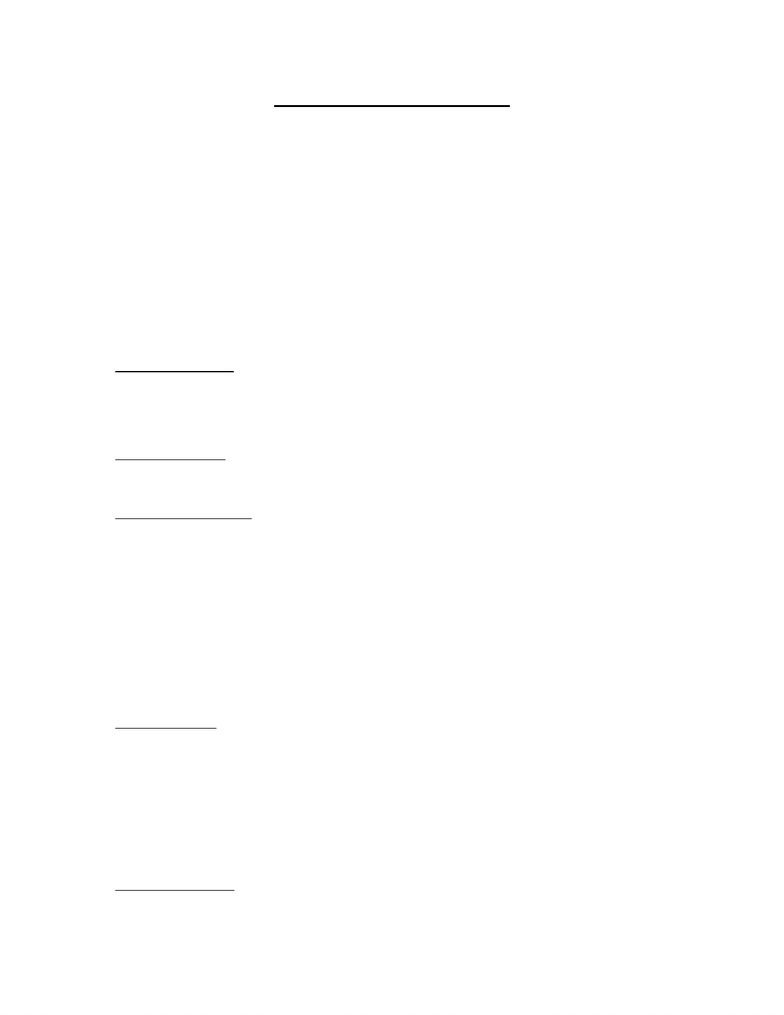 Chapter Five – Sensation & Perception
Sensation: the stimulus-detection process by which our sense organs respond to and translate
environmental stimuli into nerve impulses that are sent to the brain
Perception: making sense of what our senses tell us – the active process of organizing this
stimulus input and giving it meaning
Synesthesia: mixing of the senses
Transduction: translating information into the language of nerve impulses
Sensation 
stimulus received by sensory receptors 
receptors translate stimulus properties into nerve impulses (transduction) 
feature detectors analyze stimulus features 
stimulus features are reconstructed into neural representation 
neural representation is compared with previously stored information in brain 
matching process results in recognition and interpretation of stimuli 
Perception
Sensory Processes
Psychophysics: studies relations between the physical characteristics of stimuli and sensory
capabilities. Concerned with two capabilities:
1. Absolute Limits of Sensitivity
2. Differences between Stimuli
Absolute Threshold
- lowest intensity at which a stimulus can be detected correctly 50% of the time
- lower the AT, the greater the sensitivity
Signal Detection Theory
- concerned with the factors that influence sensory judgments
- people’s apparent sensitivity can fluctuate
Decision Criterion
- a standard of how certain a person must be that a stimulus is present before they say they
detect it
- can change from time to time depending on fatigue, expectation, significance of stimuli
Signal Detection Theory
- concerned with the factors that influence sensory judgment
- participants can be influence by manipulating rewards and costs for giving correct or incorrect
responses
- bold participants have more Yes and False Alarms than conservative patients who have the
opposite
Subliminal Stimuli
- a stimuli so weak or brief that, although it is received by the senses, it cannot be perceived
consciously – the stimulus is below the absolute threshold
- in terms of consumer behaviour, stimuli above the absolute threshold is far more influential
EX. participants shown nine slides of a particular person  attitudes measured
for half the participants, each photograph was preceded by an unpleasant picture, the other half a
pleasant picture
unpleasant stimuli  negative attitude
pleasant stimuli  positive attitude
subliminal cues can bias what we perceive at a conscious level and may alter out conscious
experience of those stimuli
Difference Threshold
- the smallest difference between two stimuli that people can perceive 50% of the time
Weber’s Law
Unlock document 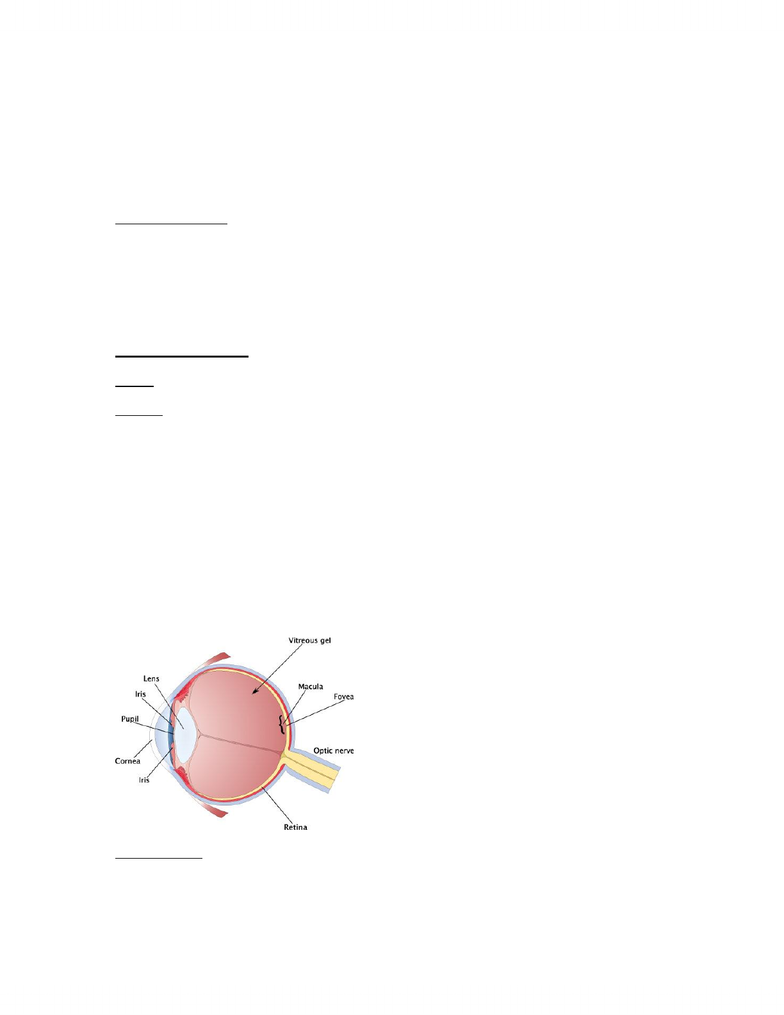 - states that the difference threshold, or jnd, is directly proportional to the magnitude of the
stimulus with which the comparison is being made
- expressed as a Weber fraction
EX. the Weber fraction for weights in 1/50
 if you lift a weight of 50 grams, a comparison weight must weigh at least 51 grams in order for
you to be able to judge as it as heavier
- smaller the fraction, the greater the sensitivity to differences
Sensory Adaptation
- sensory systems are finely attuned to changes in stimulation
- sensory neurons are engineered to respond to a constant stimulus by decreasing their activity
- diminishing sensitivity to an unchanging stimulus is called sensory adaptation
- adaptation (habituation) is an everyday experience that prevents your senses from feeling things
(ie. a watch on your skin, cold water when you are swimming)
- tiny involuntary eye movements keep images moving about the retina  if these movements did
not occur, stationary objects would fade from sight
The Sensory Systems
Vision
The Eye
Cornea: a transparent protective structure at the front of the eye where light enters
Pupil: behind the cornea, an adjustable opening that can dilate of constrict to control the amount
of light entering the eye
Iris: coloured part, surrounds the pupil, muscles inside control the size of the pupil
Lens: behind the pupil, an elastic structure that becomes thinner to focus on distant objects and
thicker to focus on nearby objects
Retina: a multi-layered tissue at the rear of the fluid filled eyeball, visual images are focused here
 the lens reverses the image from right to left and top to bottom when it is projected upon the
retina
 the brain reconstructs the visual input
 retina contains two types of light sensitive receptor cells (rods & cones)
 when the lens focuses on the visual image in front of the retina (too near to the lens), it results
in myopia aka nearsightedness
 when the lens does not thicken enough and the image is therefore focused on a point behind
the retina, it results in hyperopia aka farsightedness
Photoreceptors
- 120 million rods, 6 million cones
Rods: function best in dim light, primarily black and white brightness receptors, 500 times more
sensitive to light than cones
Cones: colour receptors, function best in bright illumination
Unlock document 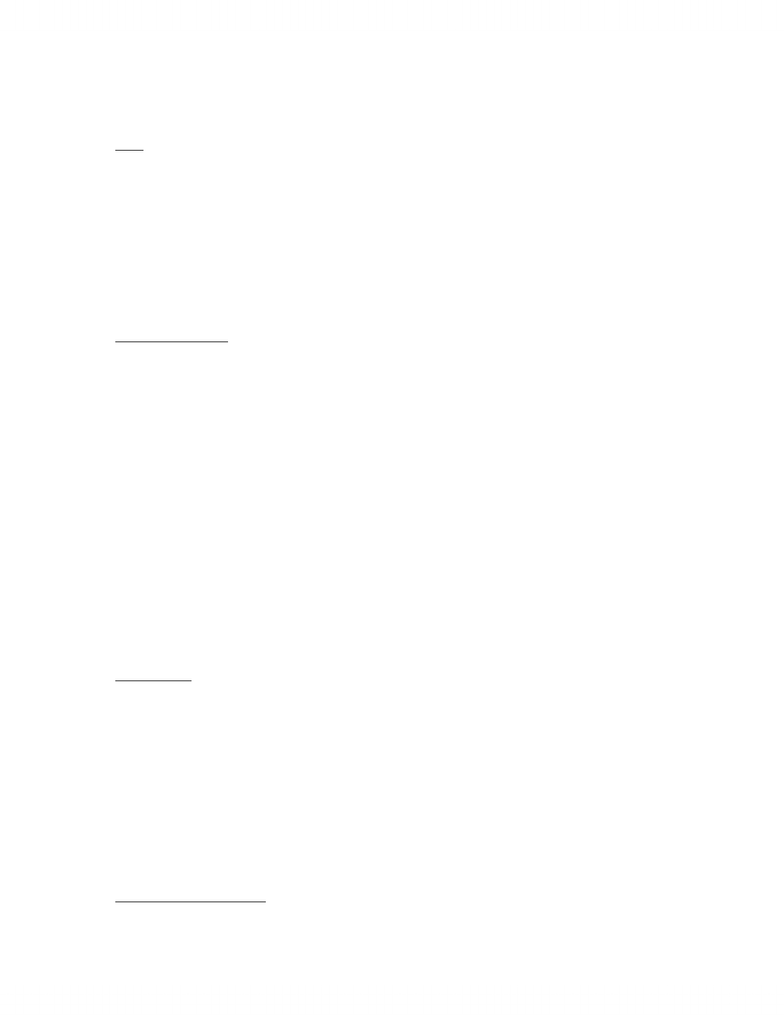 Fovea: a small area in the centre of the retina that contains only cones
- cones decrease in concentration as one moves away from the centre of the retina
- the periphery of the retina contains mainly rods
Cells
Bipolar Cells: have synaptic connections with the rods & cones, they synapse with:
Ganglion Cells: axons are collected into a bundle to form the optic nerve
- many rods are connected to the same bipolar cell, therefore, they combine/funnel their individual
electrical messages to the bipolar cell
- this is why we can detect a faint stimulus
- cones that lie in the periphery of the retina also share bipolar cells
- they have a private line to a single bipolar cell
- our visual acuity (ability to see fine detail) is greatest when the image projects directly on the
fovea
- the optic nerve formed by the axons of the ganglion cells exits through the back of the eye not
far from the fovea, producing a blind spot
Visual Transduction
- the process whereby the characteristics of a stimulus are converted into nerve impulses
- rods & cones translate light waves into nerve impulses through the action of protein molecules
called photopigments
- absorption of light by these molecules produces a chemical reaction that changes rate of
neurotransmitter release at receptor synapse
- the greater the change in transmitter release, the stronger the signal passed on to the bipolar
cell and, in turn, to the ganglion cells whose axons form the optic nerve
Brightness Vision and Dark Adaptation
- brightness sensitivity of both rods and cones depends on wavelength of light
- rods are insensitive at the red end of the colour spectrum
- cones are most sensitive to low illumination in the greenish yellow range of the spectrum
- dark adaptation is the progressive improvement in brightness sensitivity that occurs over time
under conditions of low illumination
- if the eye has been exposed to conditions of high illumination (bright sunlight) a substantial
amount of photopigment will be depleted
- during the process, photopigment molecules are regenerated – receptor’s sensitivity increases
greatly
* dark adaptation curve *
- cones gradually become sensitive but max out after 5-10 minutes
- rods do not reach maximum sensitivity for about 30 minutes – the photopigments regenerate
slower
Colour Vision
Trichromatic Theory
- advanced by Thomas Young & Hermann von Helmholtz
- states that the visible spectrum can be produced by some combination of the wavelengths
corresponding to blue, green, and red  additive colour mixture
- individual cones are most sensitive to blue, green, or red
- each receptor class sends messages to the brain  combined to recreate hye
- if all three are equally activated  white
Disadvantages:
- certain people with red-green colour blindness are able to experience yellow when the theory
states yellow is the addition of red and green
- the theory does not account for after images  an image in a different colour appears after a
colour stimulus has been viewed steadily then withdrawn
Opponent-Process Theory
- formulated by Ewald Hering
Unlock document