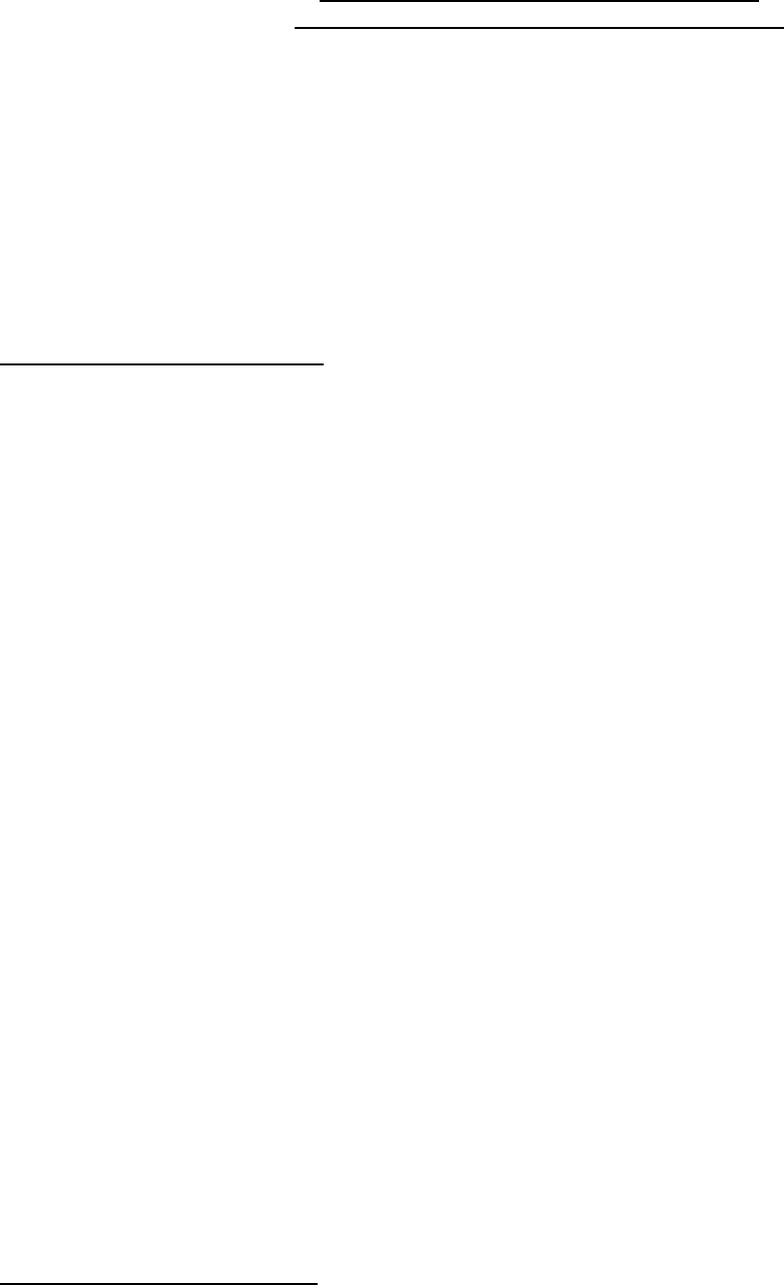 Chapter 6 – Attitudes and Attitude Change
Influencing Throughts, Feelings, and Behaviour
The Nature and Origin of Attitudes
-Attitudes: an evaluation of a person, object, or idea
- People are not neutral observers of the world but constant evaluators of what they see
- An attitude is made up of three components:
o1. Affective component, consisting of emotional reactions toward the attitude object (e.g., another
person or a social issue)
o2. Cognitive component, consisting of thoughts and beliefs about the attitude object and
o3. Behavioural component, consisting of actions or observable behaviour toward the attitude
object
Where Do Attitudes Come From?
- Any given attitude can be based more on one type of experience than another
Affectively Based Attitudes
-Affectively based attitude: an attitude based primarily on people’s emotions and feelings about the
attitude object
- Occasionally we even feel very positive about something in spite of having negative beliefs (e.g., falling
in love)
- One source is people’s values
- Affectively based attitudes have three things in common:
o1. They do not result from a rational examination of the issues
o2. They are not governed by logic (e.g., persuasive arguments about the issues seldom change an
affectively based attitude)
o3. They are often linked to people’s values, so that trying to change them challenges those values
Cognitively Based Attitudes
-Cognitively based attitudes: an attitude based primarily on a person’s beliefs about the properties of an
attitude object
- The purpose of this kind of attitude is to classify the pluses and minuses of an object so we can quickly
tell whether it is worth our while to have anything to do with it
Behaviourally Based Attitudes
-Behaviourally based attitudes: an attitude based primarily on observations of how one behaves toward
an attitude object
- Recall self-perception theory: under certain circumstances people don’t know how they feel until they
see how they behave
Comparing Affective, Cognitive, and Behavioural Bases of Attitudes
- When attitudes are negative toward particular groups, they are often cognitively based
oSocial groups
- When more positive, attitudes were more likely to be based on affect
oSocial issues
Explicit versus Implicit Attitudes
-Explicit attitudes: attitudes that we consciously endorse and can easily report
-Implicit attitudes: attitudes that are involuntary, uncontrollable, and at time unconscious
- Implicit attitudes are rooted more in people’s childhood experiences
- Explicit attitudes are rooted more in their recent experiences
Unlock document 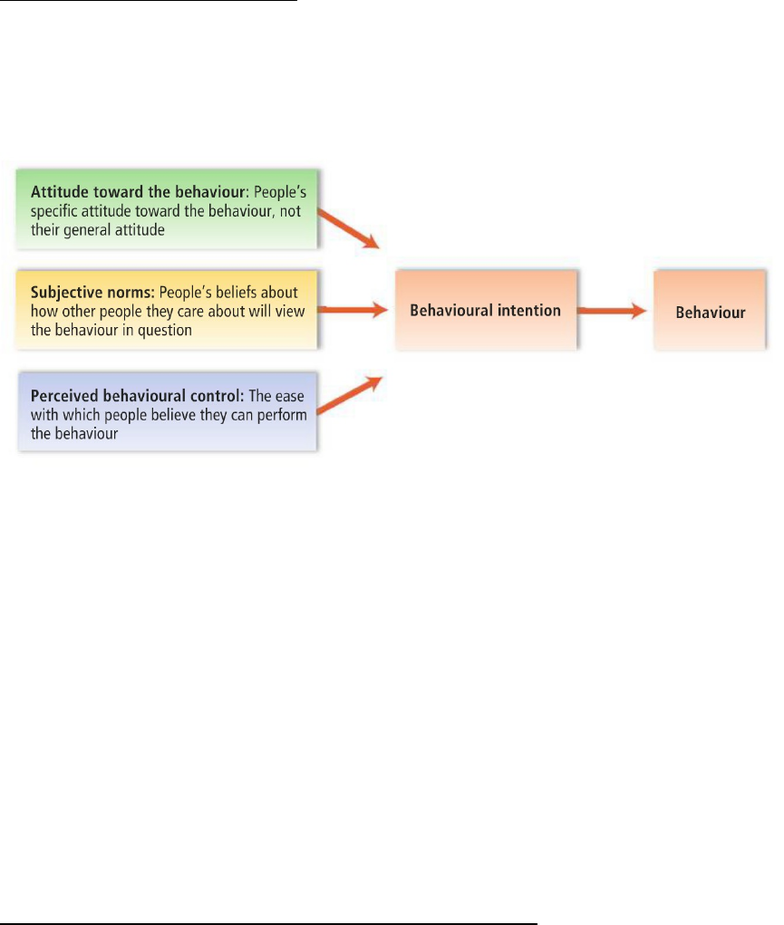 When Attitudes Predict Behaviour
- People’s attitudes are generally poor predictors of their behaviour
The Theory of Planned Behaviour
-Theory of planned behaviour: a theory that the best predictors of a person’s planned, deliberate
behaviours (i.e., their intention) are the person’s attitudes toward specific behaviours, subjective norms,
and perceived behaviours control
- Attitude towards the behaviour + Subjective norms + Perceived behavioural control  Behavioural
intention  Behaviour
Specific Attitudes
- The theory of planned behaviour holds that only specific attitudes toward the behaviour is question can
be expected to predict that behaviour
Subjective Norms
- We also measure people’s subjective norms—their beliefs about how the people they care about will
view the behaviour in question
Perceived Behavioural Control
- People’s intention are influenced by perceived behavioural control—the ease with which people believe
they can perform the behaviour
- Culture: predicted that personal attitudes would be stronger predictor of behaviour intentions in
individualistic cultures & social norms would be stronger predictors in collectivist cultures
oPersonal attitudes did influence i.e., quitting smoking in NA
oHowever, influence of social norms did not vary significantly by culture
The Theory of Planned Behaviour: Implications for Safer Sex
- Attitudes are often inconsistent with behaviour; inconsistency takes form of having positive attitudes
toward using condoms, expressing intentions to use condoms, but failing to do so
- Social norms predicted intentions to use condoms
- Subjective norms also predicted actual condom use
- If people fear a negative reaction, they are less likely to raise the issue of condom use with a potential
sexual partner
Perceived Behavioural Control
- The more difficult you find it to perform behaviours such as buying condoms or bringing up the topic
with your partner, the less likely you are to actually use them
Unlock document

Behavioural Intention
- Mood affects intention
- Women who were low in self-esteem were especially likely to intend to engaged in unprotected sex
when they were in a bad mood
- Alcohol intoxication lowers intention to use condoms
Attitude Change
Persuasive Communications and Attitude Change
- It’s not easy to figure out how to contrast a truly persuasive communication: communication (e.g., a
speech or TV ad) advocating a particular side of an issue
-Yale Attitude Change Approach: the study of the conditions under which people are most likely to
change their attitudes in response to persuasive messages; researchers in this tradition focus on “who
said what to whom”—that is, on the
oSource of the communication (e.g., expertise, attractiveness)
oCommunication itself (e.g., quality of arguments; whether speaker presents both sides of issue)
oNature of the audience (e.g., which kinds of appeals work with hostile versus friendly audiences)
- The effectiveness of persuasive communication depends on who says what to whom
Who: The Source of the
Communication - Credible speakers
- Attractive speakers
- Trustworthy, likeable
What: The Nature of the
Communication - Messages that do not seem to be designed to
influence
- In general, two-sided communication works better
if you are sure to refute arguments on other side
-Primacy effect: if speeches are given back to back,
and there is a delay before people make up their
mines, best to go first—people are more influenced
by what they hear first
-Recency effect: if there is delay between speeches
and people will make up their mind right after, best
to go last—people remember what they hear most
recently
To Whom: The Nature of
the Audience - Distracted audience: often persuaded more than
one that is not
- Low intelligence: more influenceable
- Moderate self-esteem: more influenceable
- Age 18-25: most susceptible to attitude change
- People are more likely to remember credible source, but also change their behaviour accordingly
- Not clear which aspects of persuasive communication most important…
The Central and Peripheral Routes to Persuasion
-Heuristic-systematic persuasion model: the theory that there are two ways in which persuasive
communications can cause attitude change: people either process the merits of the arguments (known as
systematic processing) or are swayed by factors that are peripheral to the message itself, such as
“Experts are always right” (known as heuristic processing)
-Elaboration likelihood model: the theory that there are two ways in which persuasive communications
can cause attitude change: the central route occurs when people are motivated and have the ability to
Unlock document