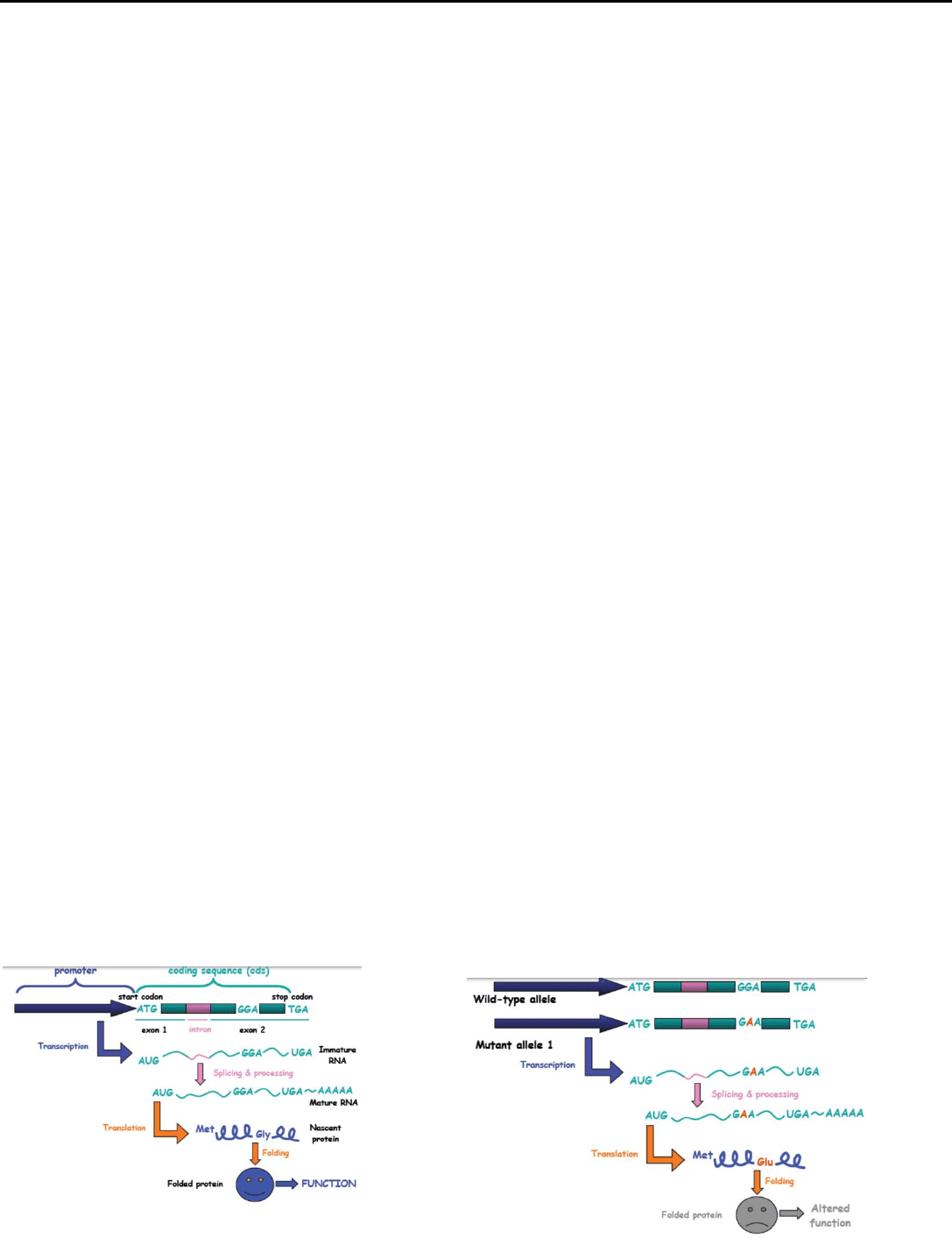 Lecture 3: Molecular Basis of Genetic Polymorphisms & Their Detection
Mutations are the source of allelic variation
• Mutation is the process whereby genes change from one allelic form to another. The creation of entirely new
alleles can occur
o Creates variation
• Genes mutate randomly, at any time and in any cell of an organism
• Can arise spontaneously during normal replication, or can be induced by a mutagen
• Only mutations in germ line cells can be transmitted to progeny. Somatic mutations can not be transmitted
• Inherited mutations appear as alleles in populations of individuals
• Allele frequency is the percentage of the total number of gene copies represented by one allele
o Wild-type: allele whose frequency is ≥ 1%
o Mutant allele: allele whose frequency is < 1%
o Monomorphic: gene with only one wild-type allele
o Polymorphic: gene with more than one wild-type allele
▪ Detectable change (difference) in a given locus/gene
• Forward mutation: changes wild-type allele to a different allele
• Reverse mutation: causes novel mutation to revert back to wild-type (reversion)
• Mutations affecting phenotype occur very rarely
• Different genes mutate at different rates
o Mutation rate varies from 1 in 1000 to 1 in 1,000,000,000 per gamete per generation
• Rate of forward mutation is almost always higher than rate of reverse mutation
• Mutation can occur during normal DNA replication
• Mutation rate can increase after exposure to mutagen
o UV light, chemicals
Classification of Mutations
• Wild type: is the starting sequence
• Substitution: base is replaced by one of the other three bases
• Deletion: block of one or more DNA pairs is lost
• Insertion: block of one or more DNA pairs is added
• Inversion: rotation of piece of DNA
• Reciprocal translocation: parts of nonhomologous chromosomes change places
• Chromosomal rearrangements: affect many genes at one time
• SNP’s are single nucleotide polymorphisms
o They are alleles where only a single base is changed
Gene Expression and Alleles
• Allelic differences at the DNA level can influence mRNA expression and/or protein function, and thus the
phenotype
• Important domain of an enzyme is the active site
o If there is a mutation in the mRNA code than a different protein could be made and result in a disease due
to the non-functional protein
find more resources at oneclass.com
find more resources at oneclass.com
Unlock document

Answer Not sure which one ?!

I create a knockout mouseusing the agouti/black fur system \. When I cross the agoutioffspring of the originally engineered mouse, I find a ratio of 2agouti mice to 1 black furred mouse. What is the bestexplanation?

Answer not sure which one?!

Which of the following could be the sequence of the correspondingend of the other end of the cut DNA?

I PCR out a mutated gene in apatient with Lisenbee chorea (the inability to dance in acoordinated fashion) and I compare it to another patient with thatsame disease phenotype. One subject had a mutation on chromosome 4,and the other subject couldn't rock it because of a mutation onchromosome 5. This is an exampe of

A mosaic is an organismwith

A true genetic chimera can becreated by

The ABO blood group can bestbe explained by the concept of _______.

If a loss of functionmutation creates a dominant phenotype, it may be becauseof

Please select the best matchfor each.

A gene mutates, and theprotein produced has a novel way of interacting with the cell, andcreates a new phenotype because of this new functionality. This iscalled

Mutations in the somaticchromosomes may be inherited by the next generation.

A couple goes on MauryPovitch, and the results are in: you are not the father. But noother man impregnated the female (granted, unlikely for a MauryPovitch guest, but work with me here) and he must be the father.DNA analysis claims otherwise, though the child definitely wasmom's (poor thing). What may be going on here?