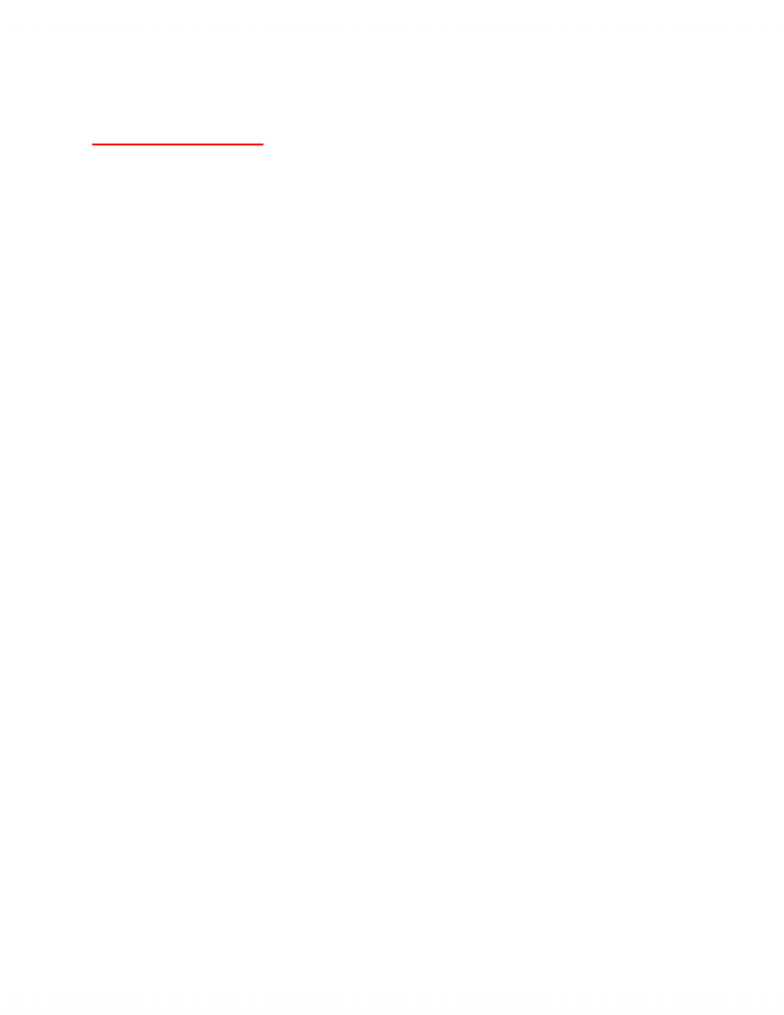 MGY378 – Microbiology II: Virology
Lecture 1: Introduction
 Viruses:
(1) Multiply only in living cells.
(2) Are obligate parasites: are metabolically inert outside the host.
(3) Rely on host metabolic processes for reproduction.
 Viruses exist for all known life forms.
 Viruses are of interest to:
a) Understand the basis of disease in humans, domestic animals and plants and to develop
cures.
b) Experimental tools for molecular cell biology.
c) As vectors for the introduction of foreign DNA into cells for the correction of genetic
mutations, adding genes, disease treatment, etc.
 The average healthy individual harbours between 8-12 different mammalian virsuses at any one
time.
 The concept of VIROMICS, i.e. viral genomics is becoming more pervasive in the study of
virology.
 It can vary based on geographic location, but there are many persistent viral infections to
human beings as a species.
 NEW viral pathogens emerge, as we are constantly exposed to new pathogens and viruses as
the environment changes.
 Over time, disease distribution can fundamentally change:
a) i.e. the distribution of DENGUE FEVER diminished from the ‘30s to the ‘70s due to the
use of DDT resulting in widespread death of the disease vector – the mosquito.
b) However once DDT use was stopped, Dengue fever rose again toward the ‘90s.
 FACTORS AFFECTING NEW VIRUS EMERGENCE AND TRANSMISSION
1. High population density (p2p transmission)
2. Rapid-transit between continents (i.e. SARS, swine flu)
3. Encroachment of humans into new environments (exposed to new pathogens)
4. Global warming: expansion of areas that can support disease vectors.
5. Changes in social norms ( more sexual partners, tattoos and piercings, and IV drug use)
 Steps in the emergence of host-switching viruses:
1. Exposure  Infection  Spread  Adaptation
Unlock document 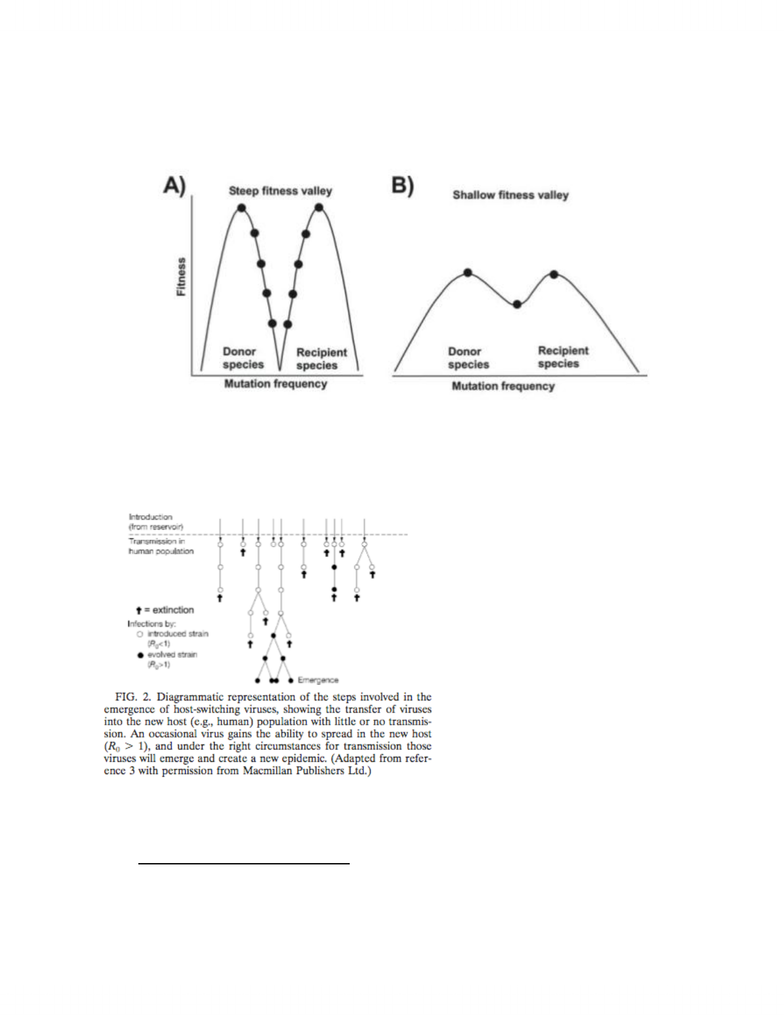  FITNESS VALLEY: A blockade to viral survivorship to prevent infection from one individual to
another.
 The shallower the fitness valley, the easier the transmission of virus from donor to recipient.
 In the emergence of host switching viruses into a new host there will be little or no
transmission.
1. An occassional virus gains the ability to spread in the new host and emerge as a
potential epidemic depending on transmission conditions.
 The terminating white circles in the diagram represent the extinction of the viral strain, and the
propogating filled circles represent the evolved strain.
 VARIATIONS IN VIRUS COMPLEXITY:
1. SIMPLEST VIRUSES:
Unlock document 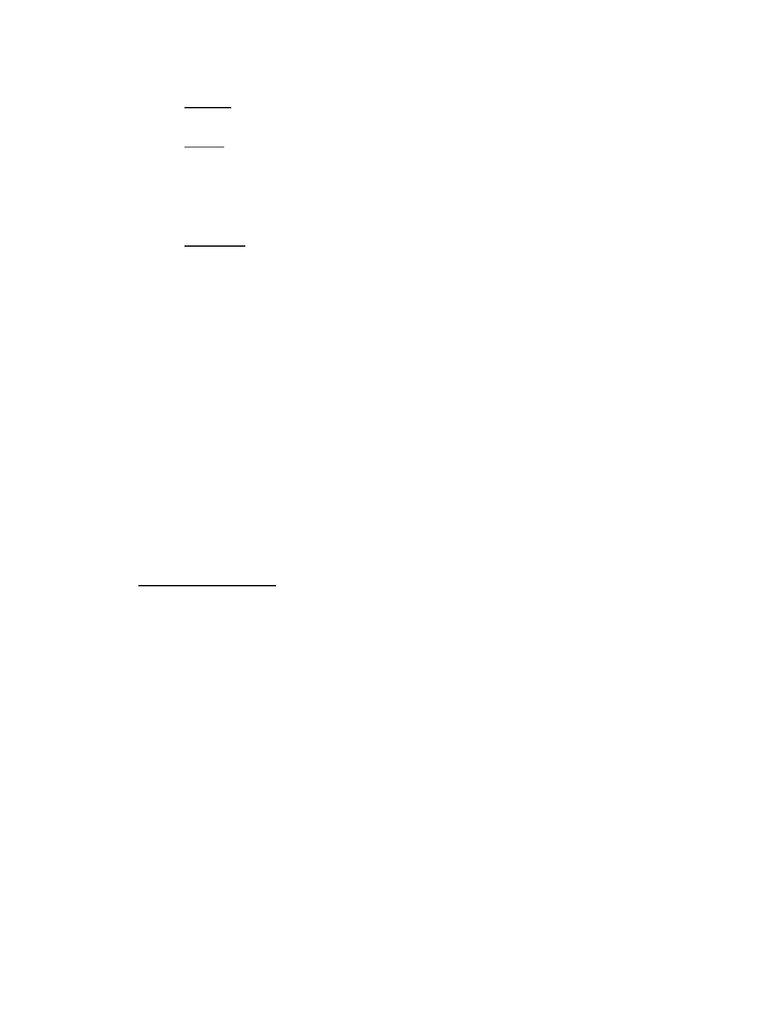 2. Viroids: Circular, single-stranded RNAs of plants. NAKED RNA IS INFECTIOUS, transmitted
by entry into plant wound sites.
3. Prions: Alternative conformation of a proteins in the nervous system that through
ingestion of prion containing food (i.e. brain contamination meat of an infected
organism) results in the contraction of BSE, or kuru.
4. MOST COMPLEX VIRUS:
5. Mimivirus: Infects amoebas, genome of 1.2 Mbp (i.e. larger than the smallest bacteria)
encoding 911 proteins. The encoding of proteins for several metabolic processes
suggests that it may be in the process if becoming a self-replicating life-form.
 Genome size of viruses vary: 3kbp (Hepatitis B) to 400kbp (Poxviruses)
 WHY DO VIRUSES HAVE COMPLEX STRUCTURE:
1. Function of the capsid is to protect the viral genetic material from the surrounding
environment, inside and outside the host.
2. Delivery of viral genetic material into the target cell  Naked nucleic acid is not well
taken up by host cells.
3. Delivery of enzymatic functions required for viral replication.
 2 types of capsid geometry: HELICAL AND ICOSAHEDRAL.
 The larger the genome size, the larger the viral shape.
 Bacteriophage structure: extremely complex.
 VIRUS CLASSIFICATION:
Group 1: Viruses with positive (+) sense RNA genomes (genomes can be directly translated by
host)
Group 2: Viruses with negative (-) sense RNA genomes (must first synthesize (+) sense RNA from
the genome via RNA dependent RNA polymerase (RdRp) – then viral proteins can be made)
Group 3: Viruses with dsRNA genomes, transcribed via RNA-dependent RNA polymerase to
generate mRNA for viral protein synthesis.
Group 4: Viruses with dsDNA genomes  they directly use the host replication machinery.
Group 5: Virus with ssDNA genomes, and must first be converted to dsDNA to make use of host
replication machinery.
Group 6: Retroviruses/hepadoviruses involve conversion of an RNA to dsDNA via reverse
transcriptase for viral protein expression.
Unlock document