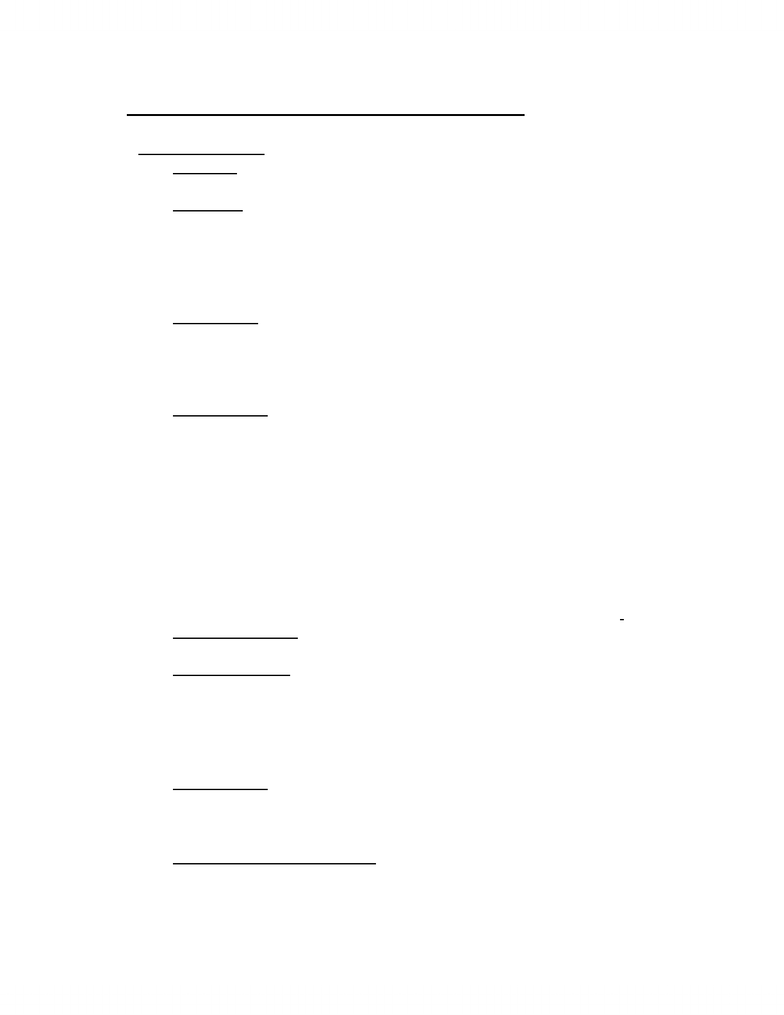 PSYA01: Chapter 6 Notes from the Textbook
Sensory Processing
oSensation: the detection of the elementary properties of a stimulus (such as
brightness, warmth, colour)
oPerception: detection of the more complex properties of a stimulus, including its
location and nature; involves learning
 ex. seeing the colour red is sensation, seeing a red apple is perception
osense organs detect stimuli, information about these stimuli is transmitted to the
brain through neural impulses (action potentials) , brain analyzes this information
and reconstructs what has occurred
oTransduction: conversion of physical stimuli into changes in the activity of
receptor cells of sensory organs
oeach sense organ responds to a particular form of energy given off by an
environmental stimulus – this means that transduction are as diverse as the type of
stimuli we can perceive
oReceptor Cells: a neuron that directly responds to a physical stimulus, such as
light, vibrations, or aromatic molecules (smell and taste)
*look at Table 6.1 Page 166 for types of transduction accomplished by sense organs
osensory information must be coded accurately to represent the environment
oa code is a system of symbols or signals representing information (like a
language)
oas long as we know the rules of the code, we can convert from one code to
another without losing any information (like translating languages)
osensory systems transmit information to the brain with two general forms:
anatomical coding and temporal coding
ofrom Chapter 1 (doctrine of specific nerve energies) we know that different
sensory organs send their information to the brain through different nerves
oAnatomical Coding: interprets the location and type of type of sensory stimulus
according to which incoming nerve fibres are active
oTemporal Coding: coding of information in terms of time (example rate)
 by firing at a faster or slower rate according to the intensity of a
stimulus, an axon can communicate quantitative information to the brain
 ex. touch co the skin: firing of a particular set of neurons tells us
where (anatomical code) the body is being touched, and rate at which neurons fire
(temporal code) tells us how intense that touch is
oPsychophysics: branch of psychology that studies the relation between physical
characteristics of stimuli and the sensations they produce
oWeber, an anatomist and physiologist, investigated ability of humans to
discriminate between various stimuli
oJust-Noticeable Difference (jnd): the smallest difference between two similar
stimuli that can be distinguished, also called difference threshold
1
www.notesolution.com
Unlock document 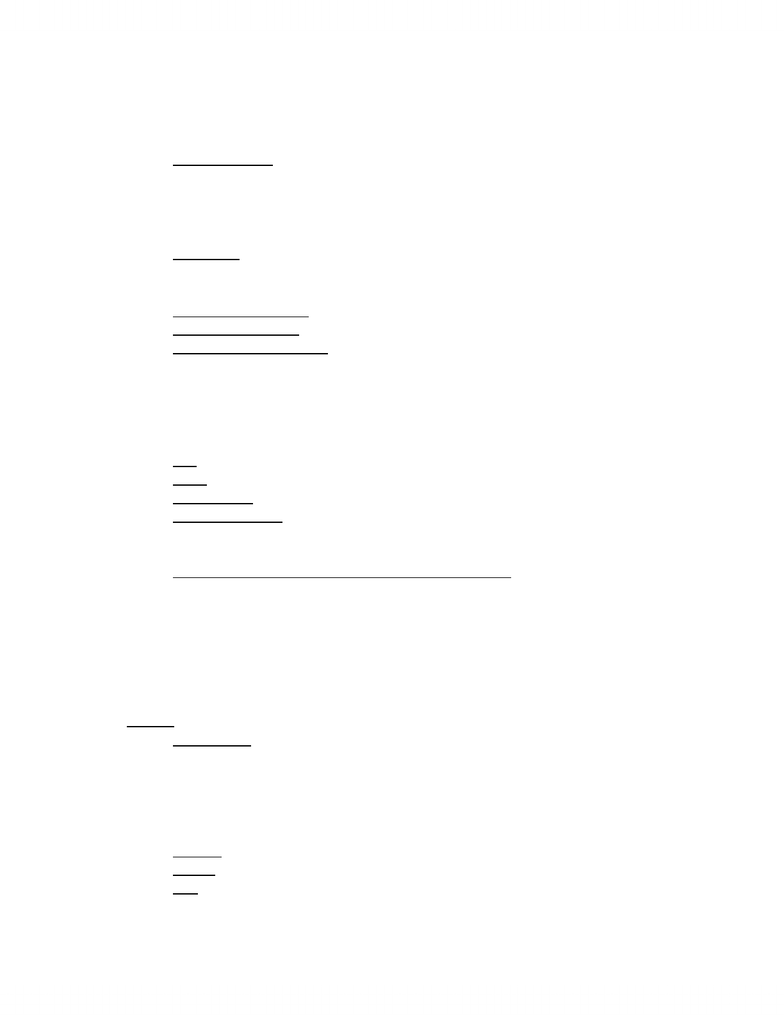  Weber noticed that the jnd is directly related to the magnitude of that
stimulus (ex. two stimuli would be similar unless they differenced by a factor of
1/40 – the ratio that held mostly constant)
oWeber Fraction: the ratio between a jnd and the magnitude of a stimulus;
reasonably constant over the middle range of most stimulus intensities (the 1/40
from example above)
Signal Detection Theory:
oThreshold: the point at which a stimulus or change in the value of a stimulus can
be just detected (not always an absolutely fixed value)
 the point at which the participant detects the stimulus 50% of the time
oDifference Threshold: an alternative name for jnd
oAbsolute Threshold: the minimum value of a stimulus that can be detected
oSignal Detection Theory: every stimulus event requires discrimination between
signal (stimulus) and noise (consisting of both background stimuli and random
activities of the nervous system)
 participant must say yes/no to whether stimulus was presented or not
oresponse bias is the tendency to say yes or no when you are not sure whether
you detected the stimulus or not
oHit: the stimulus was presented, and participant said yes
oMiss: stimulus was presented, and participant said no
oFalse Alarm: stimulus was not presented, and participant said yes
oCorrect Negative: stimulus was not presented, and participant said no
oresponse bias is greatly influenced by intermediate conditions: example $1 for
hits, 50¢ for miss
oReceiver Operating Characteristic Curve (ROC curve): a graph of hits and false
alarms of participants under difference motivational conditions, indicates people’s
ability to detect a particular stimulus
oshows performance when the sound is difficult to detect (if it was easily
detected, then participant would get a hit every time)
odetectability is measured by the relative distance of the curves from a 45-degree
line
Vision:
oWavelength: the distance between adjacent waves of radiant energy; in vision,
most closely associated with the perceptual dimension of hue
odifference wavelengths are seen as different colours
owavelength of visible light is relatively short
oour eye is very well protected: eyelid, eyelashes, eyebrows, protective reflex
mechanisms (look at Fig 6.7)
oCornea: transparent tissue covering the front of the eye
oSclera: tough outer layer of the eye; the “white” of the eye
oIris: pigmented muscle of the eye that controls the size of the size of the pupil
2
www.notesolution.com
Unlock document 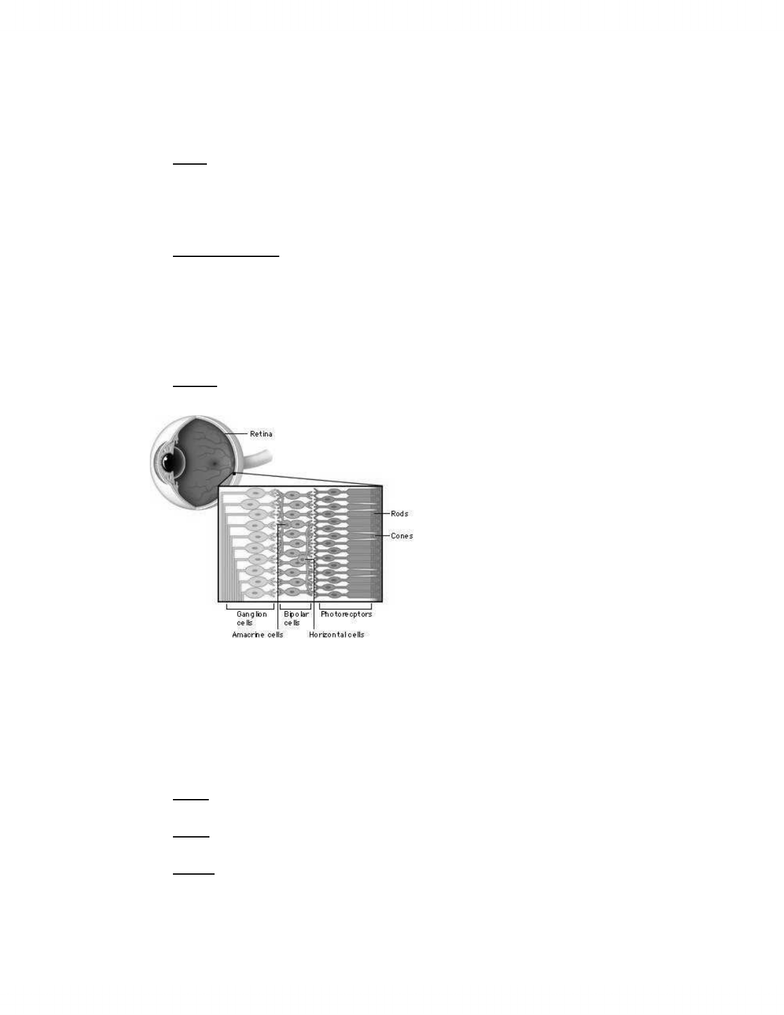 obrain regulates size of pupil; it gets big when lights are dim and small when
lights are bright
oAqueous Humour: “watery fluid” that nourishes the cornea
oLens: transparent organ situated behind the iris of the eye; helps focus an image
on the retina
olens must be transparent and therefore contains no blood vessels, therefore it is
functionally dead tissue
oshape of cornea is fixed, lens is flexible
oAccommodation: changes in the thickens of the lens of the eye that focus
images of near or distant objects on the retina
onormally length of tee eye matches the bending of light rays so that image is
sharply focused on the retina
ohowever, if eye changes shape (longer/shorter) then the image is no longer
focused on the retina and people need an extra lens, in the form of glasses or
contacts, to help focus the image on the retina
oRetina: tissue at the back inside surface of the eye that contains the
photoreceptors and associated neurons
othe retina has three
principal layers:
oPHOTORECEPTOR: a
receptive cell for vision in the
retina; a rod or a cone
 photoreceptors respond
to light and pass the information
on by means of a transmitter
substance to…
oBIPOLAR CELLS: a
neuron in the retina that receives
information from photoreceptors
and passes it on to the ganglion
cells, from which axons proceed through he optic nerves to the brain
oGANGLION CELLS: a neuron in the retina that receives information from the
photoreceptors by means of bipolar cells and from which axons proceed through
the optic nerves to the brain
ovisual information passes through a 3-cell chain to the brain: photoreceptor 
bipolar cell  ganglion cell  brain
otwo types of photoreceptors: 125 million rods and 6 million cones
oRods: a photoreceptor that is very sensitive to light (allows us to see in dim
light) but insensitive to differences between colours
oCone: a photoreceptor that is responsible for acute daytime vision and for colour
vision
oFovea: a small pit near the centre of the retina containing densely packed cones;
responsible for the most acute and detailed vision
ofar away from fovea, number of cones decreases and # rods increases
3
www.notesolution.com
Unlock document