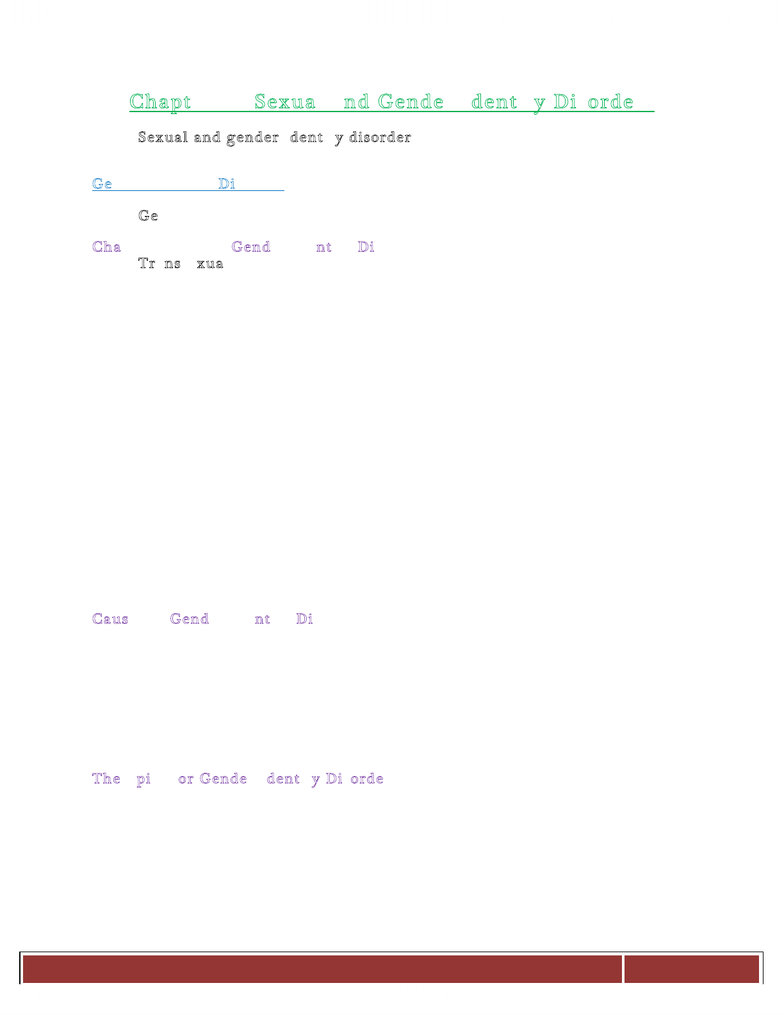 Chapter 14: Sexual & Gender Identity Disorders
Page 1
Chapter 14: Sexual and Gender Identity Disorders
• Sexual and gender identity disorder: full range of human sexual thoughts,
feelings and actions that are generally regarded as abnormal and dysfunctional
Gender Identity Disorder
• Gender identity: our sense of ourselves as male or female
Characteristics of Gender Identity Disorder
• Transsexualism: people with gender identity disorders are sometimes referred to
as this; they feel deep within themselves (usually from early childhood) that they are
of the opposite sex
• They may want to pass as a member of the opposite sex or even have surgery
• In childhood – associated with cross-gender behaviours ! dressing in opposite-sex
clothes, preferring opposite-sex playmates, and engaging in play that would be more
typical of the opposite sex
• They are usually recognized by their parents at age 2-4
• GID is 6.6x more frequent in boys than girls
• (Zucker) factors associated with decision to seek clinical assessment
o Belief that the behaviour was no longer a phase that the child would grow out
of
o Threshold violation (wanting to dress certain way outside of home also)
o Belief that the child was experiencing intense distress about being a boy or
girl
o Concerns about potential or actual rejection by peers
• Most children with GID do not grow up to be disordered in adulthood, even without
professional intervention; many demonstrate homosexual orientation
• GID people often experience anxiety and depression
• GID in childhood is linked with separation anxiety disorder
• Prevalence rate ! 1/30,000 (men) ! 1/100,000-150,000 (women)
Causes of Gender Identity Disorder
• More information is needed on the cause of GID in order to resolve this debate
• Evidence indicates that gender identity is influenced by hormones
• Other research shows that human and other primate offspring of mothers who have
taken sex hormones during pregnancy frequently behave like members of the
opposite sex and have anatomical abnormalities
• Brain structures differences are also being investigated
• Environment may play a huge factor as well (male patients report having distant
relationships with their fathers; females often report history of physical/sexual abuse)
Therapies for Gender Identity Disorder
• There are 2 main types " one attempts to alter the body to suit the person’s
psychology ! the other is designed to alter the psychology to match the person’s
body
Body Alterations
• Prior to body alterations the person is required to go through 6-12 months of
psychotherapy
• The therapy focuses on anxiety & depression as well as options available to the
person on altering their body
www.notesolution.com
Unlock document 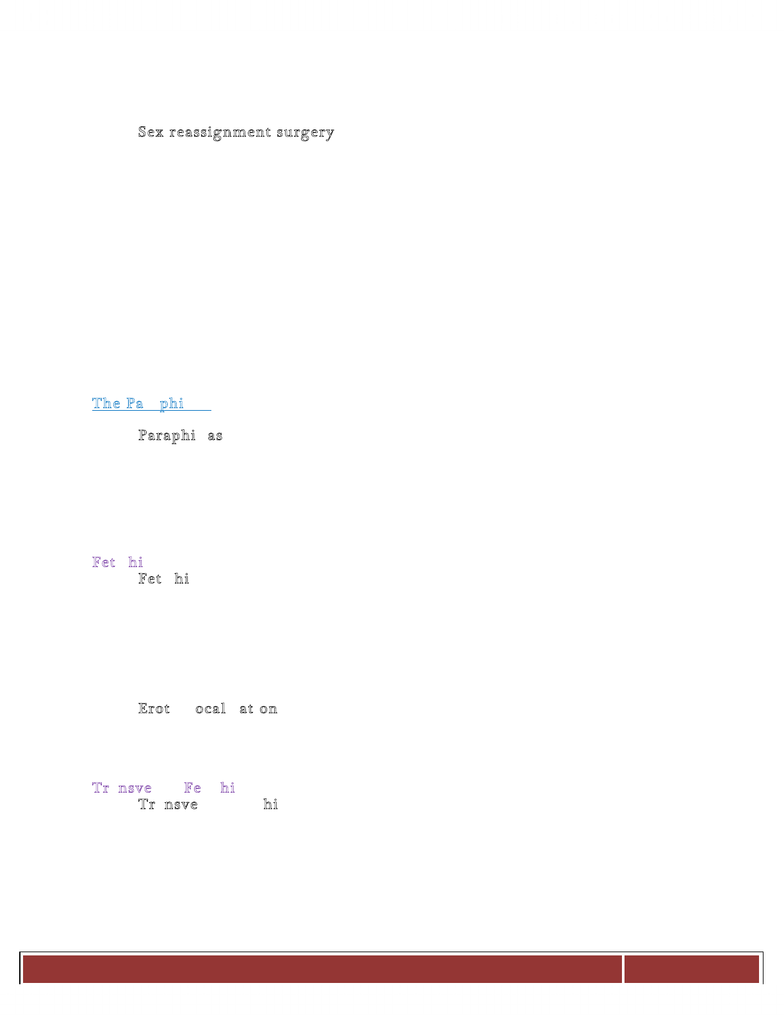 Chapter 14: Sexual & Gender Identity Disorders
Page 2
• Some people may chose just to have cosmetic surgery (facial hair, adams apple
removal etc), and take hormone pills
• Sex reassignment surgery: an operation in which the existing genitalia are
altered to make them more like those of the opposite sex
• It is much more frequently exercised by men than by women
• Satisfactory factors (not regretting) of postsurgery was based on
o Reasonable emotional stability
o Successful adaptation in the new role for at least 1 year before surgery
o Adequate understanding of the actual limitations and consequences of the
surgery
o Psychotherapy in the context of an established gender identity program
Alterations of Gender Identity
• Some apparently successful procedures for altering gender identity through
behaviour therapy have been reported
• One technique paired slides of women with slides of men, the idea being that sexual
arousal from the latter might be transferred to the former – this positive approach to
changing the arousal properties of images and fantasies was complemented by
aversion therapy to reduce the attractiveness of men
The Paraphilias
• Paraphilias: a group of disorders involving sexual attraction to unusual objects or
sexual activities that are unusual in nature
• These fantasies, urges or behaviours must last
at least 6 months
and cause significant
distress or impairment
• The distress & impairment part has caused some problems because many people
with it are neither distressed nor impaired (so it’s usually ignored)
• Most people with paraphilias are male
Fetishism
• Fetishism: involves a reliance on an inanimate object for sexual arousal
• Almost always male & has recurrent and intense sexual urges toward non living
objects
• The presence of the fetish is strongly preferred or even necessary for sexual arousal
to occur
• Examples ! feet, shoes, sheer stockings, rubber products, toilet articles, fur
garments, underpants
• The attraction felt has a compulsive quality (involuntary and irresistible)
• Erotic focalization: the exclusive and very special status the object occupies as a
sexual stimulant
• The disorder begins in adolescence
• Fetishists often have other paraphilias (peudophilia, sadism, and masochism)
Transvestic Fetishism
• Transvestic fetishism: or transvestism; when a man is sexually aroused by
dressing in women’s clothing, although he still regards himself as a man
• Varies from wearing women’s underwear under clothes to full cross-dressing
• Impersonators are not considered transvestic unless the cross-dressing is associated
with sexual arousal
• It should not be confused with cross-dressing associated with GID or with the cross-
dressing preferences of some homosexuals
www.notesolution.com
Unlock document 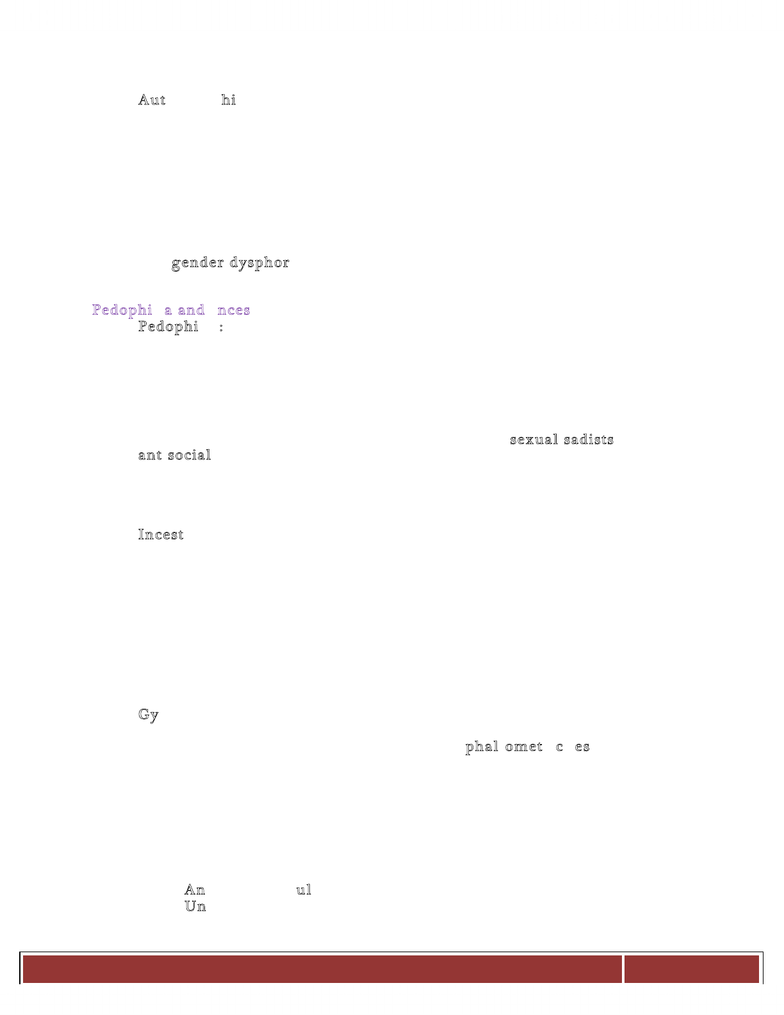 Chapter 14: Sexual & Gender Identity Disorders
Page 3
• Autogynephilia: a man’s tendency to become sexually aroused at the thought or
image of himself as a women (typically found in association with transvestism)
• Usually begins with partial cross dressing in childhood or adolescence
• Transvestites are heterosexual, always males, and by and large cross-dress
episodically rather than on a regular basis
• They tend to be masculine in appearance & many are married
• Cross-dressing usually takes place in private and in secret and is known to few
members of the family
• Distress & disability don’t seem to apply at all to transvestics
• Over time it may get stronger and they may feel discomfort with their anatomical
sex ( gender dysphoria ) ! but not to the extent of GID
• Its comorbid with other paraphilias like masochism
Pedophilia and Incest
• Pedophilia: adults who derive sexual gratification through physical and often
sexual contact with prepubescent children unrelated to them
• The offenders must be at least 16 years old and at least 5 years older than the child
• Occurs more frequently in males
• Often comorbid with mood and anxiety disorders, substance abuse, and other
paraphilias
• The use of internet has made it easier for them to acquire a child
• A minority of pedophiles, who might also be classified as sexual sadists or
antisocial (psychopathic) personalities, inflict serious bodily harm on the object of
their passion (they wish to hurt the child physically at least as much as they wish to
obtain sexual gratification)
• Homicidal child molesters show greater physiological response to and preference for
descriptions of assaults on children
• Incest: sexual relations between close relatives for whom marriage is forbidden
o Most common between brothers and sisters, then father-daughter (considered
more pathological)
• The incest taboo has adaptive evolutionary significance (negative biological effects)
• It is more present when mothers is absent or disabled
• Incest is listed in DSM as a subtype of pedophilia
• Difference between incest & pedophilia
o Incest is by definition between members of the same sex
o Incest victims tend to be more older than pedophile’s victims they desire
# Incest is usually when they are mature physically whereas in pedophile
is when they are sexually immature
• Gynephile: an adult who is incestuous with a child in the absence of a mature,
adults sex partner
• Plethysmograph measures have been described as phallometric tests and they
have been used to identity males – both adults and adolescents with pedophilic
interests
• Alcohol use and stress increases the likelihood that a pedophile will molest a child
• 1 ! of all child molestations (also within families) are committed by adolescent
males (50% of adult offenders began in early teens). Their homes often lacked
structure and positive support
• Cluster analyses of scores on California Psychological Inventory have identified 4
types of offenders
o Antisocial/impulsive – more pathological characteristics
o Unusual/isolated – more pathological characteristics
www.notesolution.com
Unlock document

28. A father believes that certain behaviours are more appropriate for boys than for girls. His wife has heard him share these beliefs and she wonders whether they are partly responsible for the fact that he relates differently to his son, with whom he tends to use more verbal and physical prohibition than he does with his daughter. In this example, the father's beliefs would be examples of , while the fact that he treats his children differently depending on their gender demonstrates the concept of A) gender identities, gender constancies B) sex-role stereotypes; gender preferences C) sex-role stereotypes; sex typing D) gender identities; sex typing E) gender identities; gender behaviour

28. A father believes that certain behaviours are more appropriate for boys than for girls. His wife has heard him share these beliefs and she wonders whether they are partly responsible for the fact that he relates differently to his son, with whom he tends to use more verbal and physical prohibition than he does with his daughter. In this example, the father's beliefs would be examples of , while the fact that he treats his children differently depending on their gender demonstrates the concept of A) gender identities, gender constancies B) sex-role stereotypes, gender preferences C) sex-role stereotypes; sex typing D) gender identities, sex typing E) gender identities, gender behaviour