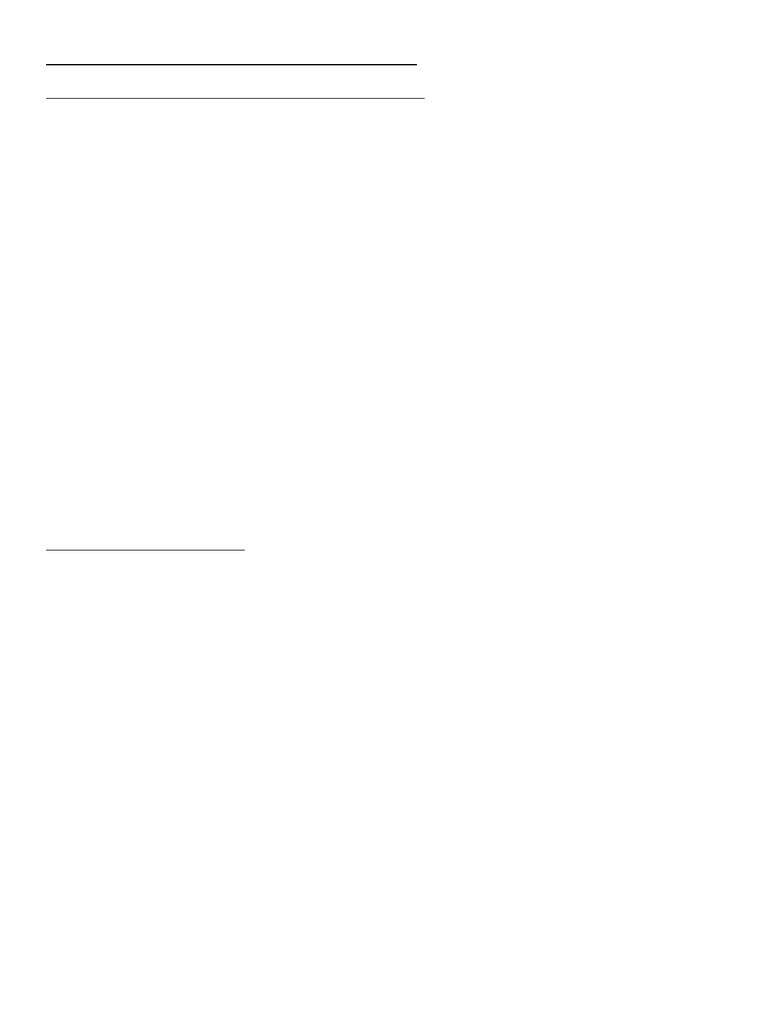 Chapter 9 – Concepts and Generic Knowledge
Definitions: What Do We Know When We Know What a Dog Is?
- If someone send us to pet shop to buy dog – sure to succeed, and other facts of dogs
- How do know this knowledge?
1. Something w/ dictionary definition: “A dog is a creature that 1) is mammalian, 2) has four legs, 3) barks, d) wags
its tail”
 If we were asked what dogs, cats and horses have in common, we could scan our definition of each one looking
for common elements
- Difficulty w/ proposal was w/ Ludwig Wittgenstein, who noted that philosophers have been trying to define
terms like “virtue” and “knowledge” – however, these terms were still accepts without accepted full definitions
 How about the word “game”: What is a game? i.e. hide-and-seek, what makes hide-and-seek a game? It a) is an
activity most often practiced by children, b) engaged for fun, c) has certain rules, d) involves multiple people, e)
is somewhat competitive, g) played during periods of leisure
 All these are plausible attributes, so we define “game” this way
 But are they really part of the definition of “game”? How about Olympic Games? They aren’t children, and aren’t
“fun”
 What about card games?
Family Resemblance
- Need a way to identify concepts tat highlights what the various members of category have in common while
allowing exceptions on rules
- We would not say “A dog is a creature that has fur and 4 legs and barks” (i.e. hair Chihuahua, three-legged dog)
- Wittengenstein’s proposal - members of category have a family resemblance
- Wittengenstein proposed that 1000s of categories we can think about work in the same fashion – no features that
are shared by all or all games, just as there are no features shared by everyone in your family
Prototypes and Typicality Effects
- One way to think about definitions are they set “boundaries” for category, if a test case has certain attributes, then
it is inside the category. If the test doesn’t have attributes = outside category
- Prototype theory: Best way to identify as category to characterize a concept specify “center” of category to
characterize a concept, is to specify the “center” of category
Fuzzy Boundaries and Graded Membership
 What it means to “know” a concept is simply to have some mental representation of concept’s prototype.
Categorize objects by comparing them to prototypes stored in memory
 Since category is characterized by its center (the prototype) and not by its boundaries, there’s no way we can
say whether something is inside or outside the category
- Fuzzy boundary: NO clear specification of category membership and non-membership
- Not all category members are equal
1. Classical view: Object was either in category of not
2. Prototype view: Fuzzy boundaries, categorization is a matter of more or less
Objects closer to the prototype are in effect “better” members of the category than objects farther form the
prototype
- Prototypes have graded membership, with some dogs being “doggier” than others etc.
Testing the Prototype Notion
- Sentence Verification Task: Participants are presented w/ sentences; their job is to indicate whether each
sentence is true or false (how quickly they can do this, speed depends on several factors. Reponses spend
depends on the number of steps the participants must traverse to confirm sentences)
i.e. “A penguin is a bird” than “A robin is a bird”
Unlock document 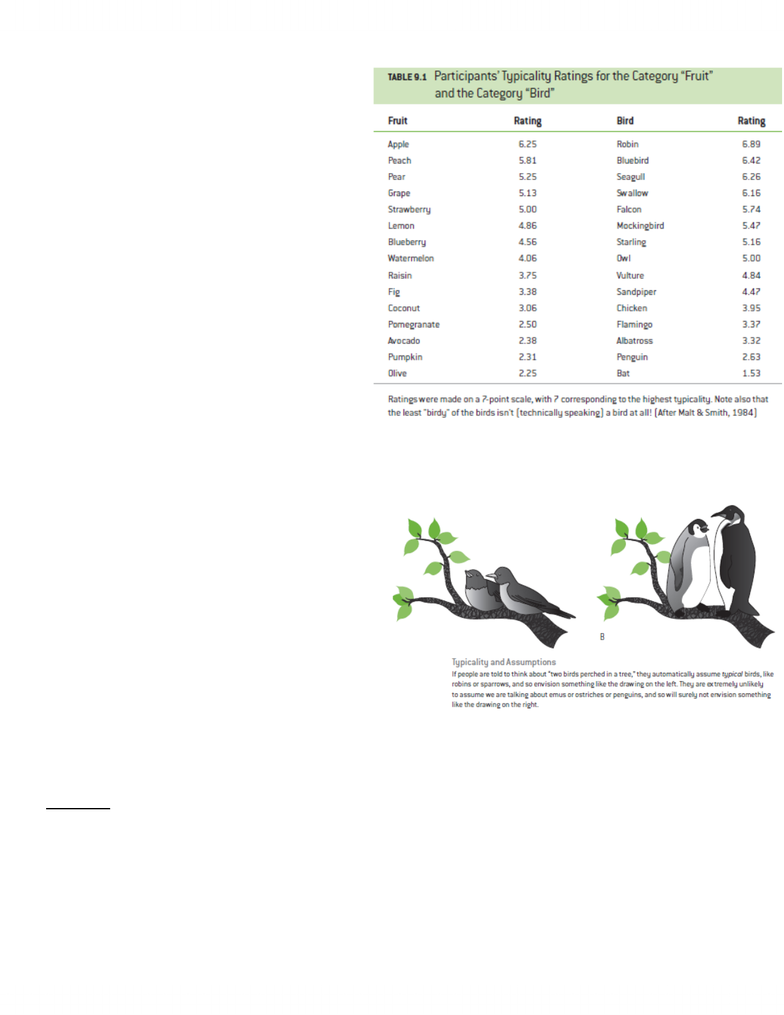 According to prototype perspective, participant smakes these judgments by comparing thing mentions to
prototype
- Production task: Name as many irds or dogs as
you can, they will do this production task by
locating their bird or dog prototype in memory
and then ask themselves what resembles their
prototype
- Picture-Identification task: Yielding faster
response if someone is asked “Does this next
picture show you a bird” or “Does the net
picture show you a fruit?”
 Rating: Explicitly asked participants to
judge how typical various category
members were for the category,
participants given instructions like “We all
know that some birds are “birdier” than
other, some
Basic-Level Categories
- Certain categories are “privileged” and show this
distinction in a variety of tasks – certain types of
category are also privileged
 i.e. imagine that we show you a picture of a chair and simply ask “What is this” You are more likely to say
“chair” and not “item of furniture”/”Windsor chair”
 More likely to use general terms than specifics
- Rosch and others say there is a “natural” level of
categorization, neither too specific nor too general
- Basic-level categorization: Represented in our
language w/ a single word, while more specific
categories are identified only via a phrase. (i.e.
basic-level-“Chair” or “apple”, subcategories “lawn
chair” or “Gold delicious apple” are not basic level)
- Basic-level categories also show up in memory errors
– participants read story and after a delay their
memory for the story was tested. If stored had specific
terms, participants recalled that they heard something
more general (i.e. “She noticed that her jeans were
stained” was misremembered as “her pants were stained”). If the story had general terms, they were
misremembered as being more specific.
- Basic-level categorization is important for variety of purposes, reflects a natural way to categorize the object in
our world
Exemplars
- Typicality guides many of our category judgements (i.e. in diagnosing disease, “How much does this case
resemble typical case of disease X, Y etc?”
Analogies from Remembered Exemplars
- Some cases of categorization can draw on knowledge about specific category members rather than general
information
Unlock document 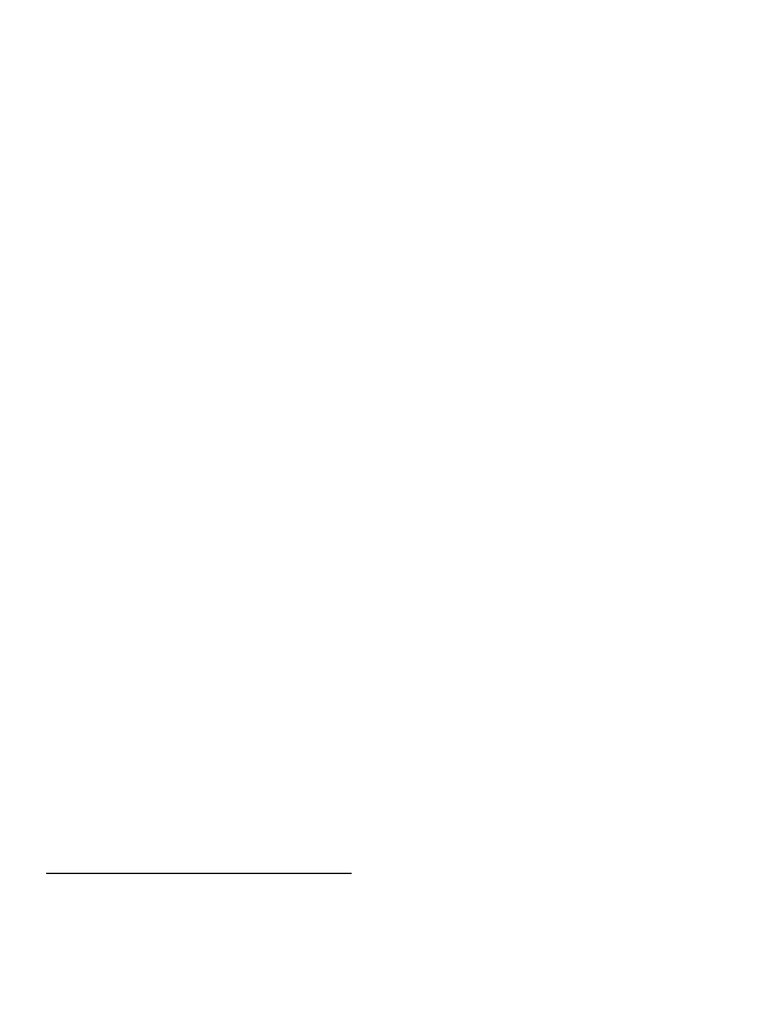  i.e. someone asks “Is this a chair?”, you call up chair prototype from memory and say yes. You can also get your
decision in a different way You might notice this object is similar to an object in Uncle Jerry’s living room, and
you know that the object is a chair so you say “Yes”
- Exemplar-based reasoning:” Exemplar is specific remembered instance (an example)
- Similar to prototype view, you categorize objects by comparing them to mentally represented “standard” –
difference lies in what that standard it (prototype-average representation vs. exemplar-standard is
provided by whatever example of category comes in mind)
Explaining Typicality Data With an Exemplar Model
- Exemplar-based approach can also explain the graded-membership pattern
 i.e. task where we show people series of pictures and ask them to decide whether each picture shows a fruit are
not. People will respond quicker for typical fruits than less typical fruits.
 Exemplar theory – people make judgment by comparing pictures to specific memories of fruits- mentally
represented examples  to make your decision, you’ll try to think of fruit exemplar that resembles the one in
the picture
 If picture is apple – memory search is extremely fast vs. fig or carob – memory search will be difficult
 Your production will favour typical fruits – not because of prototyping, but because of pattern of what’s
available in memory
Exemplars Preserve Information About Variability
- Exemplar-based views can easily explain typicality effects, favour neither or both are compatible w; evidence
- Some favour exemplar view – an average doesn’t’ tell you how variable a set is
- You have some knowledge about the variability within a category – sometime use this variability as an aid to
categorization
- Set of exemplar preserves information about variability; a prototype does not, since people seem sensitive to
variability information, this a strike against prototype and for exemplar
A Combination of Exemplars and Prototypes
- We may rely on exemplars – people “tune” their concepts to match circumstance, and they think about birds
differently when thinking about Chinese birds than American birds; they think about gifts differently when
thinking about gifts for student rather than gifts for a faculty member etc.
- People can adjust their categories in fairly precise ways: not just “gift for 4-years old” “gift for a 4-year-old who
recently broke her wrist” or gift for 4-y-o who likes sports but recently broke her wrist”
- If people rely on exemplar, their reasoning will vary somewhat as they move form 1 circumstance to the next or
as they shift perspectives
- Some of our conceptual knowledge involves exemplars, but prototypes have their advantages (efficient and
economical manner for what’s typical for a category)
- Mix of exemplar and prototype knowledge varies from person to person and from concept to concept
 i.e. extensive knowledge about individual birds and has many exemplars in memory; the same person might
have general information/prototype about snowmobiles or v.v
- Varies based on size of category (smaller=easier to think about exemplars), how confusable the category
memories are with each other, and familiarity of the category
- We combine prototype and exemplar models – you assess the resemblance b/w conceptual knowledge,
supplied by memory
The Difficulties with Categorizing Via Resemblance
- Typicality plays a huge role in our thinking, with more-typical category members being “privileged” in many
regards = relies on prototypes and exemplars
Odd Number, Even Number
Unlock document