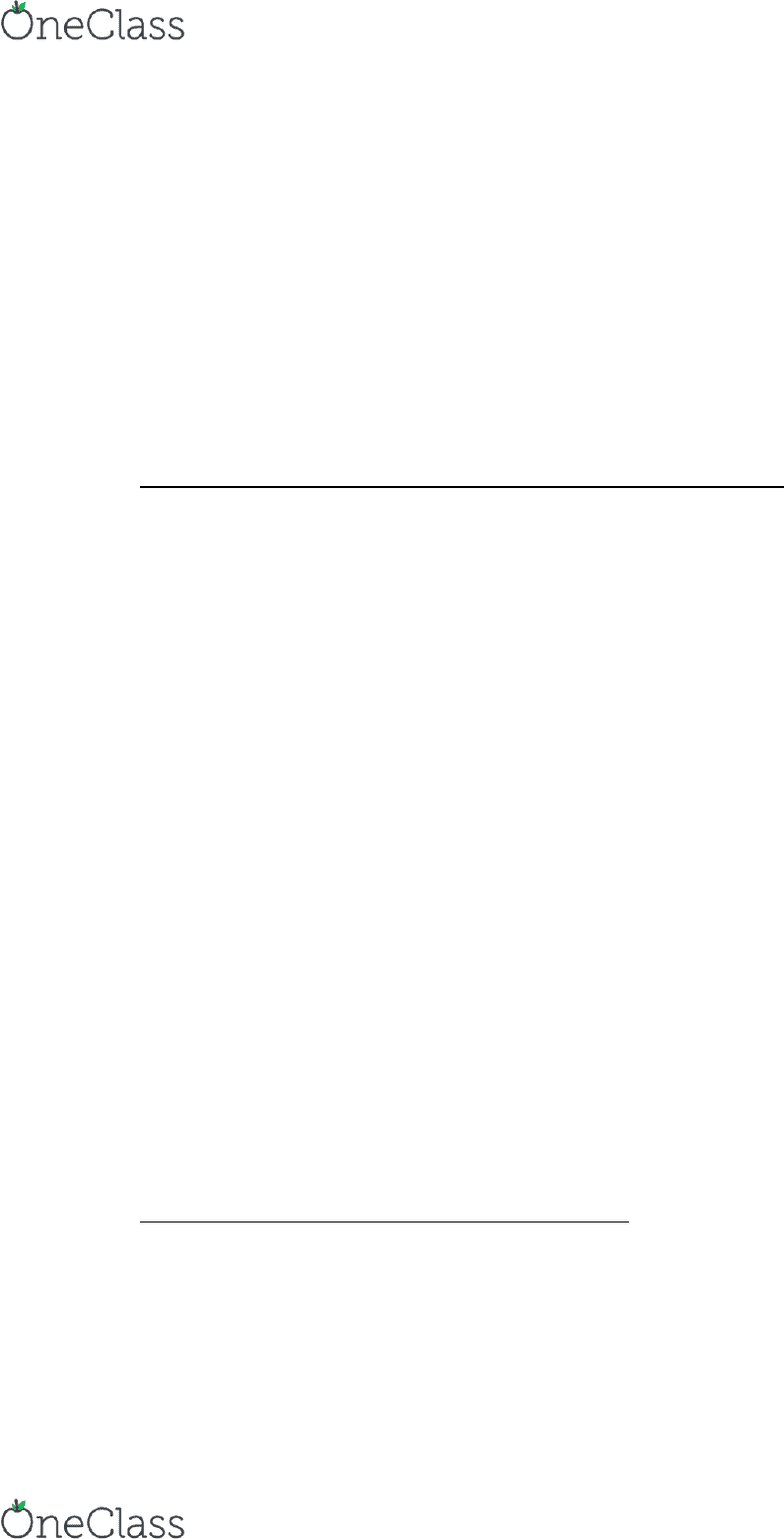 BIOL 2230 Chapter 17 Textbook Notes
In this chapter, we describe the composition and functions of this life-sustaining
fluid that serves as a transport “vehicle” for the organs of the cardiovascular system.
Blood exits the heart via arteries, which branch repeatedly until they become tiny
capillaries. By diffusing across the capillary walls, oxygen and nutrients leave the blood
and enter the body tissues, and carbon dioxide and wastes move from the tissues to the
bloodstream. As oxygen-deficient blood leaves the capillary beds, it flows into veins,
which return it to the heart. The returning blood then flows into veins, which return it to
the heart. The returning blood then flows from the heart to the lungs, where it picks up
oxygen and then returns to the heart to be pumped throughout the body once again.
17.1 The functions of blood are transport, regulation, and protection
Blood performs a number of functions, all concerned in one way or another with
transporting substances, regulating blood levels of particular substances, or protecting the
body.
TRANSPORT
Transport functions of blood include:
Delivering oxygen from the lungs and nutrients from the digestive tract to
all body cells.
Transporting metabolic waste products from cells to elimination sites.
Transporting hormones from the endocrine organs to their target organs.
REGULATION
Regulatory functions of blood include:
Maintaining appropriate body temperature by absorbing and distributing
heat throughout the body and to the skin surface to encourage heat loss.
Maintaining normal pH in body tissues. Many blood proteins and other
bloodborne solutes act as buffers to prevent excessive or abrupt changes in blood pH that
could jeopardize normal cell activities.
Maintaining adequate fluid volume in the circulatory system. Blood
proteins prevent excessive fluid loss from the bloodstream into the tissue spaces.
PROTECTION
Protective functions of blood include:
Preventing blood loss. When a blood vessel is damaged, platelets and
plasma proteins initiate clot formation, halting blood loss.
Preventing infection. Drifting along in blood are antibodies, complement
proteins, and white blood cells, all of which help defend the body against foreign
invaders such as bacteria and viruses.
17.2 Blood consists of plasma and formed elements
Blood is a specialized connective tissue in which living blood cells, called the
formed elements, are suspended in a nonliving fluid matrix called plasma. Blood lacks
the collagen and elastic fibers typical of other connective tissues, but dissolved fibrous
proteins become visible as fibrin strands during blood clotting.
If we spin a sample of blood in a centrifuge, centrifugal force packs down the
heavier formed elements and the less dense plasma remains at the top. Most of the
find more resources at oneclass.com
find more resources at oneclass.com
Unlock document 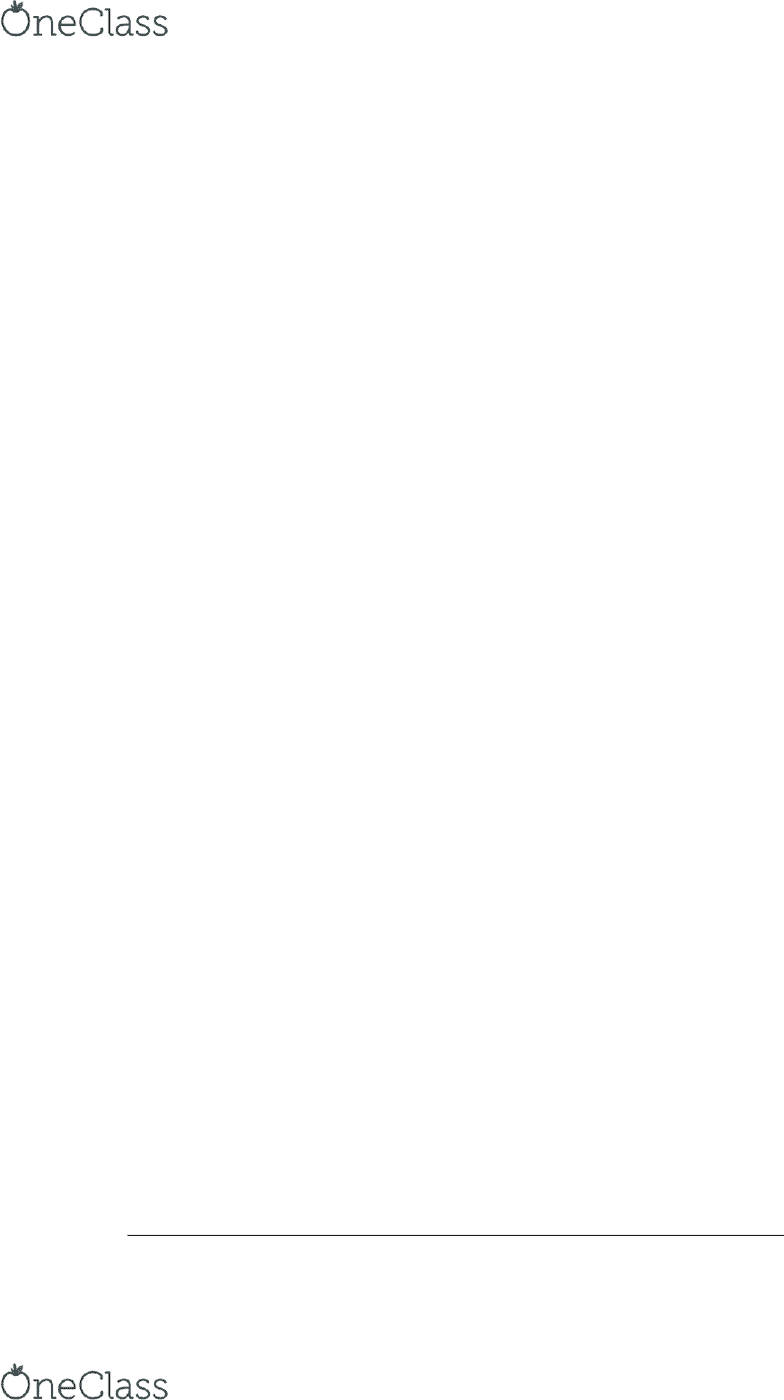 reddish mass at the bottom of the tube is erythrocytes, the red blood cells that transport
oxygen. A thin, whitish layer called the buffy coat is present at the erythrocyte-plasma
junction. This layer contains leukocytes, the white blood cells that act in various ways to
protect the body, and platelets, cell fragments that help stop bleeding.
Erythrocytes normally constitute about 45% of the total volume of a blood
sample, a percentage known as the hematocrit. Normal hematocrit values vary.
Leukocytes and platelets contribute less than 1% of blood volume. Plasma makes up most
of the remaining 55% of whole blood.
PHYSICAL CHARACTERISTICS AND VOLUME
Blood is a sticky, opaque fluid with a characteristic metallic taste. Depending on
the amount of oxygen it is carrying, the color of blood varies from scarlet (oxygen rich)
to dark red (oxygen poor). It is slightly alkaline, with a pH between 7.35 and 7.45.
Erythrocytes are the major factor contributing to blood viscosity. Women
typically have a lower blood cell count than men. When the number of red blood cells
increases beyond the normal range, blood becomes more viscous and flows more slowly.
Similarly, as the number of red blood cells drops below the lower end of the range, the
blood thins and flows more rapidly.
Blood accounts for approximately 8% of body weight. Its average volume in
healthy adult males is 5-6 L, somewhat greater than in healthy adult females (4-5) L.
BLOOD PLASMA
Blood plasma is a straw-colored, sticky fluid. Although it is mostly water, plasma
contains over 100 different dissolved solutes, including nutrients, gases, hormones,
wastes and products of cell activity, proteins, and inorganic ions. Electrolytes vastly
outnumber the other solutes.
Except for hormones and gamma globulins, most plasma proteins are produced by
the liver. Plasma proteins serve a variety of functions, but they are not normally taken up
by cells to be used as fuels or metabolic nutrients as are most other organic solutes, such
as glucose, fatty acids, and amino acids.
Albumin accounts for some 60% of plasma protein. It acts as a carrier to shuttle
certain molecules through the circulation, is an important blood buffer, and is the major
blood protein contributing to the plasma osmotic pressure.
Assuming a healthy diet, plasma composition is kept relatively constant by
various homeostatic mechanisms.
FORMED ELEMENTS
The formed elements of blood—erythrocytes, leukocytes, and platelets—have
some unusual features.
Two of the three are not even true cells: Erythrocytes have no nuclei or
organelles, and platelets are cell fragments. Only leukocytes are complete cells.
Most types of formed elements survive in the bloodstream for only a few
days.
Most blood cells do not divide. Instead, stem cells divide continuously in
red bone marrow to replace them.
Erythrocytes vastly outnumber the other types of formed elements.
17.3 Erythrocytes play a crucial role in oxygen and carbon dioxide transport
STRUCTURAL CHARACTERISTICS
find more resources at oneclass.com
find more resources at oneclass.com
Unlock document

Erythrocytes or red blood cells (RBCs) are small cells. They are shaped like
biconcave disc—flattened discs with depressed centers.
Mature erythrocytes are bound by a plasma membrane, but lack a nucleus (are
anucleate) and have essentially no organelles. In fact, they are little more than “bags” of
hemoglobin (Hb), the RBC protein that functions in gas transport. Other proteins are
present, but most function as structural proteins, allowing the RBC to deform yet spring
back into shape.
The erythrocyte is a superb example of complementarity of structure and function.
It picks up oxygen in the capillaries of the lungs and releases it to tissue cells across other
capillaries throughout the body. It also transports some 20% of the carbon dioxide
released by tissue cells back to the lungs. Three structural characteristics contribute to
erythrocyte gas transport functions:
Its small size and shape provide a huge surface area relative to volume.
The disc shape is ideally suited for gas exchange because no point within the cytoplasm
is far from the surface.
Discounting water content, an erythrocyte is over 97% hemoglobin, the
molecule that binds to and transports respiratory gases.
Because erythrocytes lack mitochondria and generate ATP by anaerobic
mechanisms, they do not consume any of the oxygen they carry, making them very
efficient oxygen transporters.
FUNCTIONS OF ERYTHROCYTES
Erythrocytes are completely dedicated to their job of transporting respiratory
gases. Hemoglobin, the protein that makes red blood cells red, binds easily and reversibly
with oxygen, and most oxygen carried in blood is bound to hemoglobin.
Hemoglobin is made up of the red heme pigment bound to the protein globin.
Globin consists of four polypeptide chains—two alpha and two beta—each binding a
ringlike heme group. Each heme group bears an atom of iron set like a jewel in its center.
A hemoglobin molecule can transport four molecules of oxygen because each iron atom
can combine reversibly with one molecule of oxygen. A single red blood cell contains
about 250 million hemoglobin molecules.
The fact that hemoglobin is contained in erythrocytes, rather than existing free in
plasma, prevents it (1) from breaking into fragments that would leak out of the
bloodstream and (2) from making blood more viscous and raising osmotic pressure.
Oxygen loading occurs in the lungs, and the direction of transport is from lungs to
tissue cells. As oxygen-deficient blood moves through the lungs, oxygen diffuses from
the air sacs of the lungs into the blood and then into the erythrocytes, where it binds to
hemoglobin. When oxygen binds to iron, the hemoglobin, now called oxyhemoglobin,
assumes a new three-dimensional shape and becomes ruby red.
In body tissues, the process is reversed. Oxygen detaches from iron, hemoglobin
resumes its former shape, and the resulting deoxyhemoglobi, or reduced hemoglobin,
becomes dark red.
About 20% of the carbon dioxide transported in the blood combines with
hemoglobin, but it binds to globin’s amino acids rather than to the heme group. This
formation of carbaminohemoglobin occurs more readily when hemoglobin is in the
reduced state. Carbon dioxide loading occurs in the tissues, and the direction of transport
is from tissues to lungs, where carbon dioxide is eliminated from the body.
find more resources at oneclass.com
find more resources at oneclass.com
Unlock document