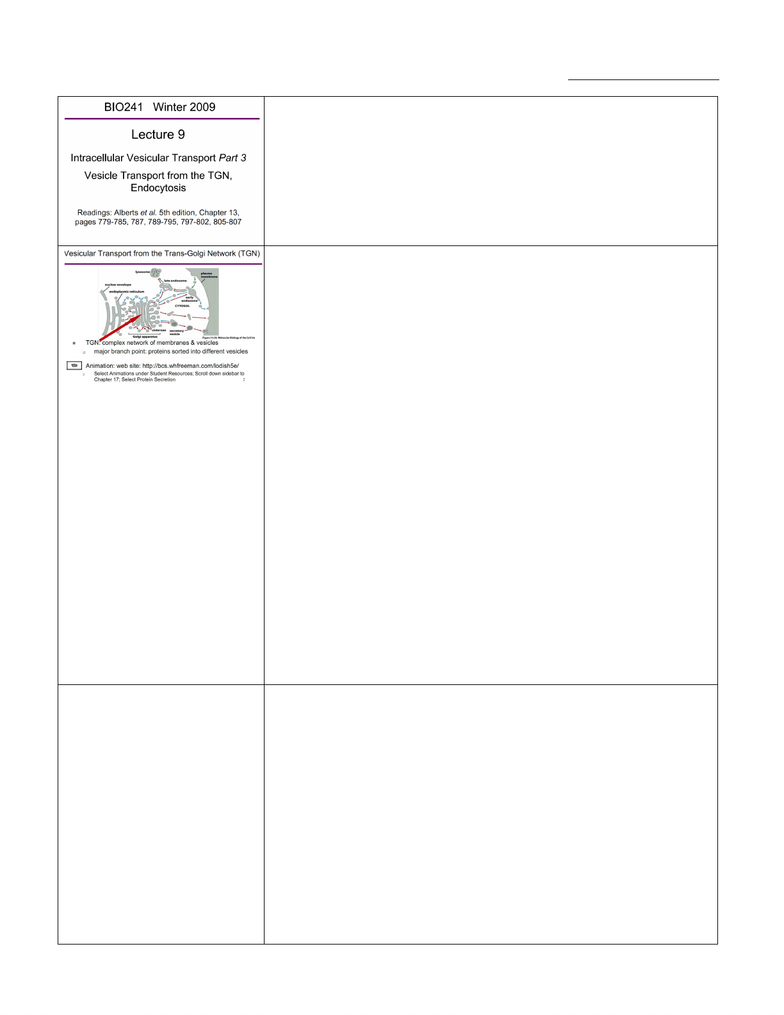 Tuesday, February 3, 2009
- We continue with vesicle transport, we’re moving away from the Golgi, the
trans Golgi network, that is basically the major branching point in vesicle
transport and how do vesicles now make it to the outside or the plasma
membrane and release their contents into the outside of the cell (extracellular
space)?
- Just to recap, this slide is what we’ve been looking at in terms of vesicle
transport. We looked at vesicle transport last lecture from the trans Golgi
network to the lysosome and how there’s a signal that is added on in the cis
Golgi onto proteins that are to be directed to the lysosome. These are for
example, lysosomal hydrolases that need to end up in the lysosome and
provide the functions of the lysosome in terms of degrading macromolecules.
- Just to recap, the trans Golgi network is a major branching point for proteins
that are to be sorted to different compartments in vesicles. Proteins that move
through the Golgi will end up in the trans Golgi network and the vesicles that
bud off the trans Golgi network can have different destinations.
- We looked at the lysosome, going through either the late endosome or early
endosome, these will eventually mature or become the lysosome.
- But vesicles can also bud off the TGN and make it to the plasma membrane,
this is called exocytosis. There are two major forms of exocytosis that can
occur. One is regulated and one is constitutive and basically what that means
is that when the vesicle buds off, it either goes to the plasma membrane and
fuses automatically, and that is the constitutive version or the vesicle can sit
around in the cytoplasm and wait for a signal in order to fuse to the plasma
membrane. That is called the regulated secretory pathway.
- We’ll look at those two examples so basically, proteins that are going
through the secretion pathway enter the ER, go through the Golgi, there are
two different ways they can go through the Golgi that we looked at and then
they’re sorted out at the major branching point which is the trans Golgi
network to either the lysosome via the early endosomes or to the plasma
membrane in a process called exocytosis.
- We’ll now look at a small animation that goes through the process till where
we are.
Animation
- The signal sequence of a membrane protein directs the ribosome to the
rough ER. The growing polypeptide chain enters the lumen of the ER through
a protein import channel in the membrane. There the signal sequence is
cleaved, sugars are added and the protein folds. Some enzymes or structural
proteins remain in the ER. Most proteins that are soluble in the ER are
transported in vesicles to the cis Golgi.
- In the cisternal maturation model, the cis Golgi matures to become the
medial Golgi, a new cis Golgi is formed by fusion of the ER vesicles. The
maturation process includes retrograde vesicular transport of resident Golgi
proteins.
- Proteins destined for secretion after modification in the Golgi are
transported from the trans Golgi to the plasma membrane. When the
membranes fuse, the proteins are released into the extracellular space.
- Soluble proteins on the outside of a cell can reenter by endocytosis and are
sorted to lysosomes for degradation. Other proteins, including lysosomal
enzymes sort directly to lysosomes from the trans Golgi.
www.notesolution.com
Unlock document 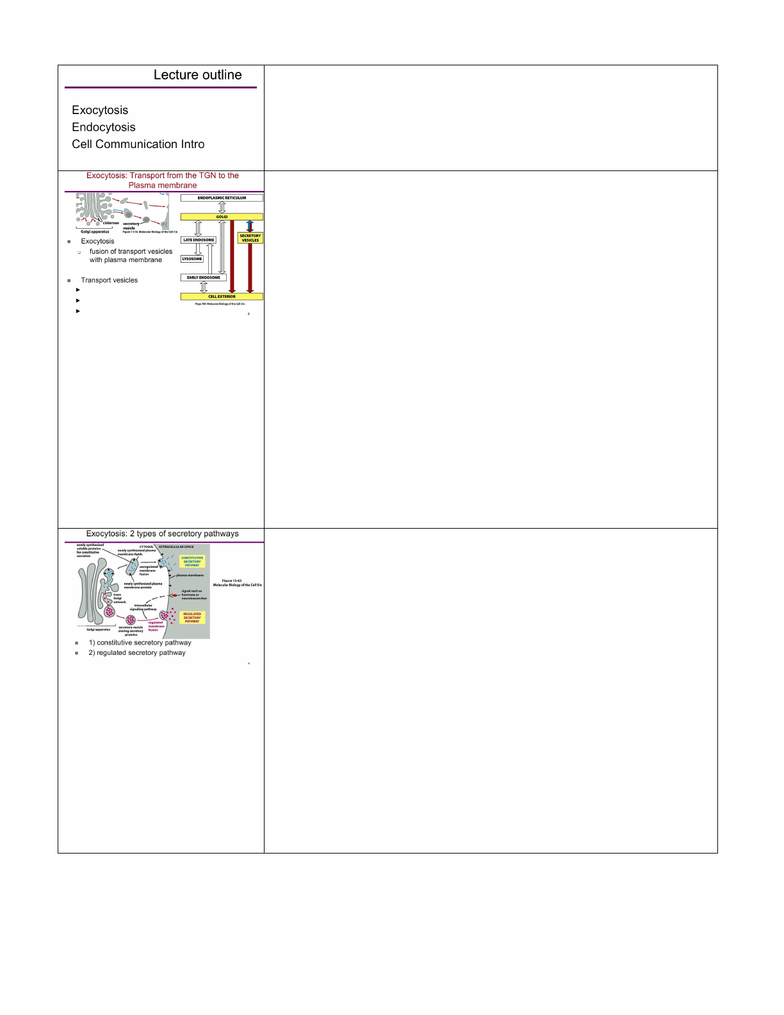 - Looking at exocytosis, the fusion of vesicles to the plasma membrane, the
uptake or formation of vesicles at the plasma membrane & uptaking
extracellular components and maybe we’ll get into cell communication if we
have time.
! Lipids
! Membrane proteins
! Secreted soluble proteins
- The first process we’ll look at is exocytosis and basically this is the
transport from the trans Golgi network to the plasma membrane. You can see
it there and there are two major versions of this: one is again the constitutive
or the regulated.
- Basically exocytosis is the fusion of transport vesicles with the PM.
Obviously these vesicles carry something with them & these transport
vesicles are carrying with them lipids. Recall that lipids are formed or
synthesized in the ER so they need to be transported to the PM if the plasma
membrane is to acquire any of these newly synthesized lipids. These vesicles
will contain lipids that will fuse and become part of the plasma membrane.
- They also contain transmembrane proteins that we saw in the animation, the
squiggly lines going through the plasma membranes and those will, once
they’re in the vesicle, once the vesicle fuses with the plasma membrane, it
will become plasma membrane associated proteins.
- They also include secreted soluble proteins. The vesicles will contain these
secreted soluble proteins and once they fuse with the PM, they’ll release
these proteins into the extracellular space. Unlike the membrane proteins,
these will not remain associated with the membranes and then they’re free to
move around outside of the cell.
- Now he mentioned that there are 2 different types of exocytosis. One of
them is called the constitutive secretory pathway & the other is called the
regulated secretory pathway. Basically the major difference b/w the two, is
that the vesicles will bud off the TGN, then you’ll have a vesicle that contains
different proteins either soluble or membrane proteins, as well as lipids
synthesized in the ER. This vesicle will right away fuse with the PM in an
unregulated fashion, that is why it is called constitutive, b/c this vesicle won’t
be regulated in terms of time when it fuses with the PM so it will form and
fuse with the PM.
- In contrast the regulated secretory pathway is very similar where you have
again a vesicle will bud off the trans Golgi network, shown in the slide and
this time the secretory vesicle with its contents, usually these are soluble
proteins, that will be released outside of the cell. An example of this we’ll
cover is insulin so insulin goes into this regulated secretory pathway and then
these vesicles await a signal in order to fuse with the PM. This signal might
be a hormone or a neurotransmitter that is recognized at the cell surface and
induces an intracellular signaling pathway which might include an increase in
cytosolic calcium for example. This intracellular signaling pathway regulates
the fusion of this vesicle to the PM so the vesicle will form and await a signal
before fusing with the PM. That is the regulated secretory pathway.
www.notesolution.com
Unlock document 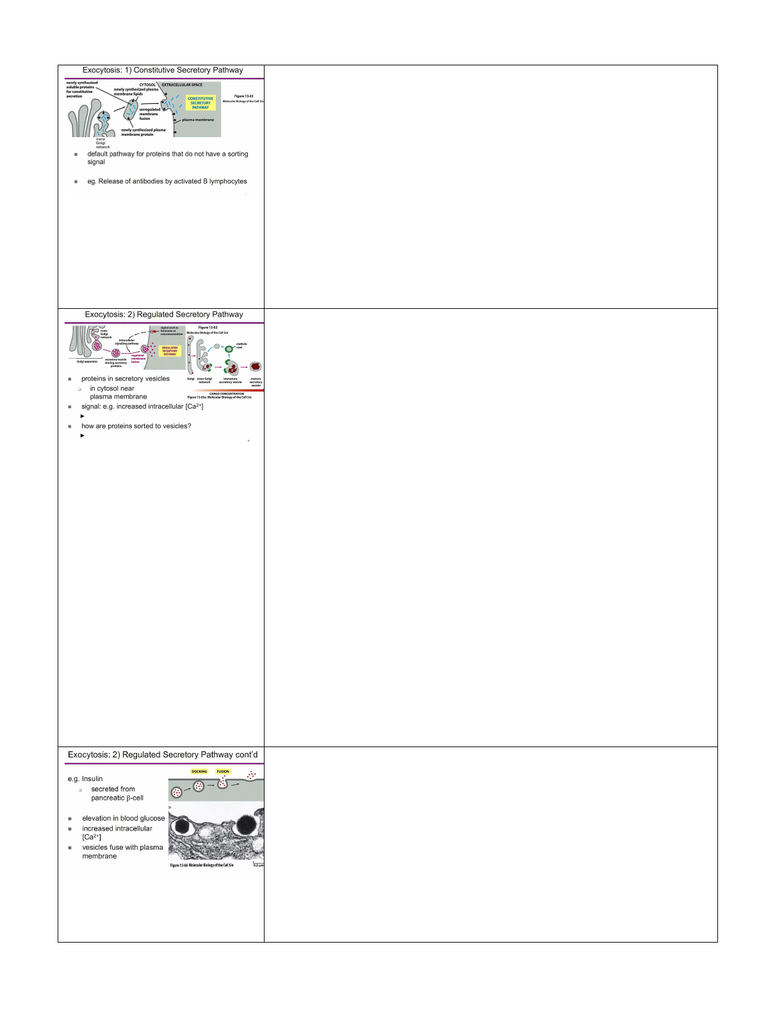 - The constitutive secretory pathway is basically the default pathway, proteins
that don’t have a sorting signal will go through this pathway so if you’ll
recall, proteins that are destined to remain in the ER have a specific AA
sequence called the KDEL sequence or the AAs K D E and L. If you were to
remove that KDEL sequence on an ER localized protein, so now you take
that same protein, you mutate that KDEL sequence so it no longer has it, that
protein without a KDEL sequence, assuming it doesn’t have any other sorting
signals, would end up in the constitutive secretory pathway and go outside
the cell. It is the KDEL sequence that will retain it in the ER but if it doesn’t
have that sequence, it will go through the Golgi into a vesicle and out the cell,
it is the default pathway for proteins that enter the ER and don’t have any
other sorting sequence.
- An example is antibodies by activated B lymphocytes. The antibodies will
be produced and released automatically by the B lymphocytes – they aren’t
retained or wait for any signal.
! Vesicles fuse with plasma membrane
! Found as aggregates in TGN (trans-Golgi network)
- The constitutive secretory pathway is the default pathway for proteins
without a sorting signal. The regulated secretory pathway on the other hand is
basically the vesicles coming out of this pathway are stored near the PM so
again they’ll bud off the trans Golgi network and they will accumulate next to
the PM and then they wait for a signal such as an increase in intracellular
calcium. Once this signal is perceived in the cell, the vesicle will fuse with
the PM and then release their contents into extracellular space.
- How are these proteins sorted to these types of vesicles? The exact signal
that leads to proteins ending up in the regulated secretory pathway is not very
well characterized in terms of what is the specific sequence that would lead
into this pathway, however it has been observed that the proteins that do end
up in this pathway are found as aggregates in the trans Golgi network.
They’re usually found in large aggregates in the trans Golgi network & these
aggregates just keep getting larger and larger as the secretory vesicles form.
Vesicles that are budding off the trans Golgi network will actually fuse
together. As the trans Golgi vesicles are budding off, you can see the proteins
are already aggregating in the trans Golgi network, they will bud off and
form an immature secretory vesicle. What happens here is basically vesicles
are continuously adding on components into this immature secretory vesicle
and at the same time, clathrin coated vesicles are removing membranes and
recycling back to the trans Golgi network.
- What you’re getting is an increased concentration of proteins into the
secretory vesicle that will form very large aggregates and eventually result in
this mature secretory vesicle that is usually packed with a specific type of
protein such as insulin.
- One of the major cues that leads a protein into the regulated secretory
pathway is usually they start to aggregate at the trans Golgi network.
- This is the example of insulin. You can see here, here is a regulated
secretory vesicle and it is a large crystalline structure of insulin. There are
lots of insulin molecules aggregating together forming this fuzzy ball we can
see under the electron microscope. There is a lot of aggregation of proteins
that occur there.
- You’ll recall that insulin is secreted from pancreatic beta cells. These are
cells of the pancreas & remember the GLUT2 that results when you increase
the blood glucose levels, there is substantial increase in the rate of glucose
transport into these pancreatic beta cells & that increase is perceived & will
lead to release of insulin by the regulated secretory pathway.
www.notesolution.com
Unlock document

Biology: Science for Life with Physiology

Which compartments are involved in vesicular transport? How are transport vesicles formed and targeted appropriately? What proteins are involved and what are their roles? What kinds of modifications are added to proteins in the ER? What determines whether a protein stays in the ER or moves on? Be sure to understand how vesicles fuse with their target membranes, and the consequences of fusion for the vesicleâs cargo as well as the proteins and lipids that are in the membrane. Know the structure of the Golgi apparatus and its role in intracellular trafficking. Understand the secretory process, endocytosis, exocytosis, function of the endosomes, and function of the lysosomes. Understand why endocytosis happens and how it can be regulated to take up specific molecules.