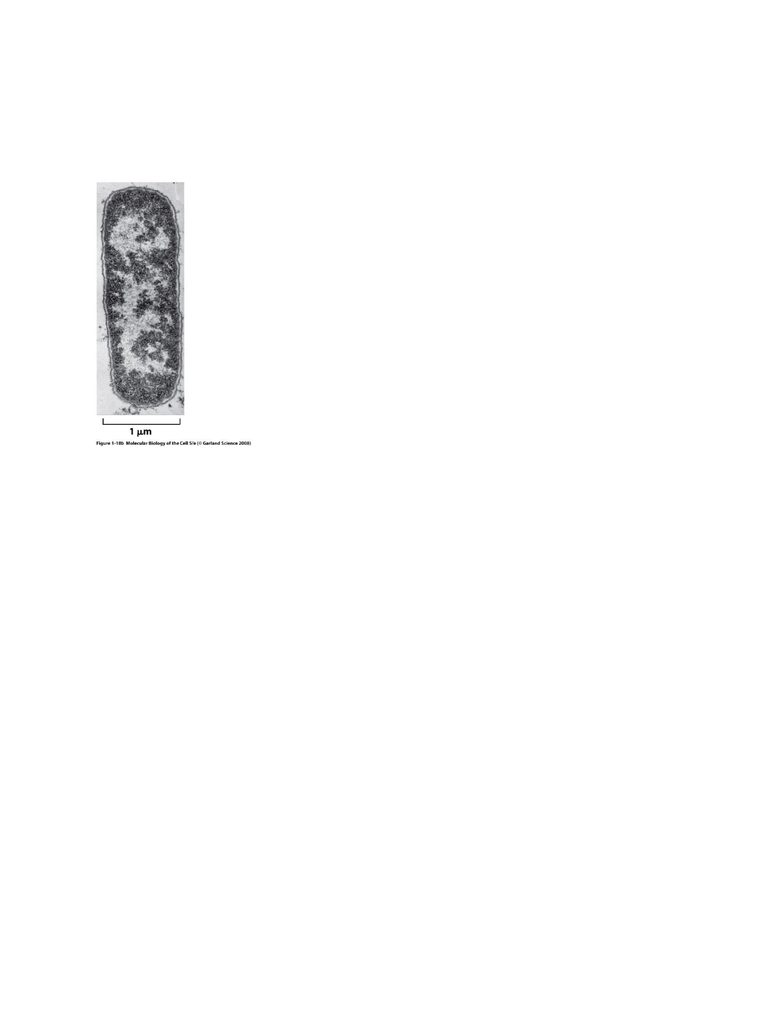 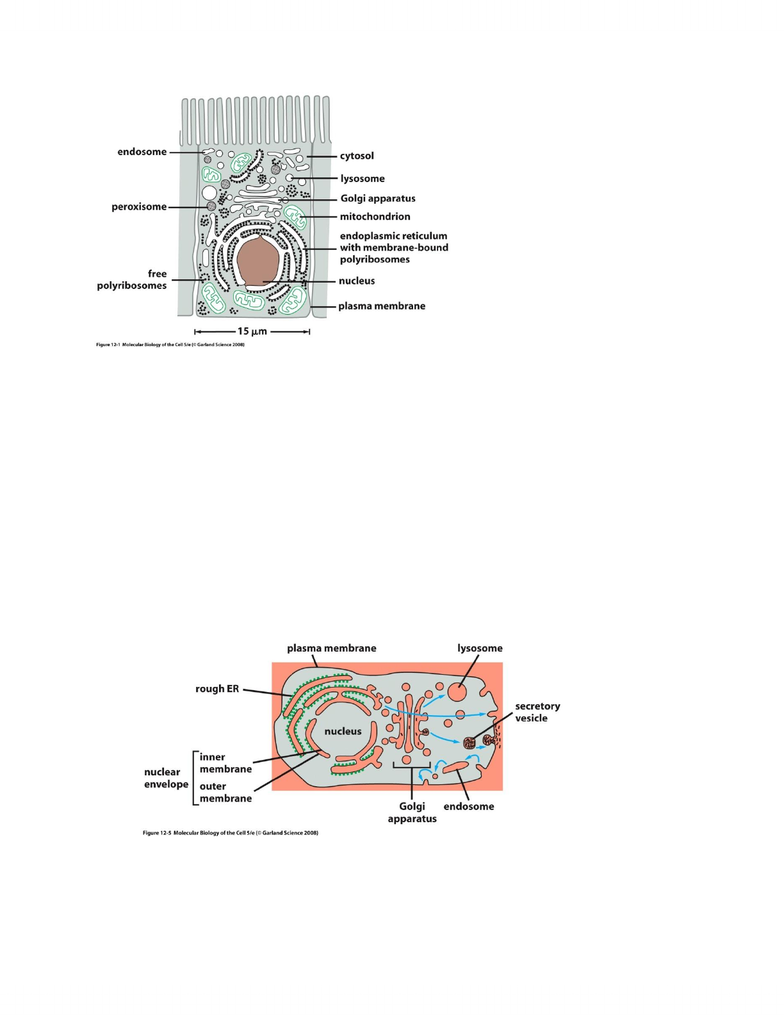 Figure 1 The major intracellular compartments of an animal cell. The cytosol (gray), endoplasmic recticulum, Golgi apparatus,
nucleus, mitochondrion, endosome, lysosome, and peroxisome are distinct compartments isolated from the rest of the cell
by at least one selectively permeable membrane.
1) Nucleus and cytosol: connected by nuclear pores
2) Secretory and exocytotic: dump stuff outside of cell
 ER, Golgi, endosomes, lysosomes
3) Mitochondria
4) Plastids (in plants only)
 Chloroplasts (and other related)
 Derived from bacteria
- Mito and plastids have own DNA and do some protein synthesis and protein import
- Endosymbiotic bacteria is ancestor
Topology: study of mathematics of holes and maps
- If things have to make a hole to get out of cell then things are topologically different
 Topologically equivalent spaces shown in red
 Lumen of the ER= outside of cell (same space)
 So must be connected by vesicle traffic
 All organelles come from pre existing organelles
Unlock document 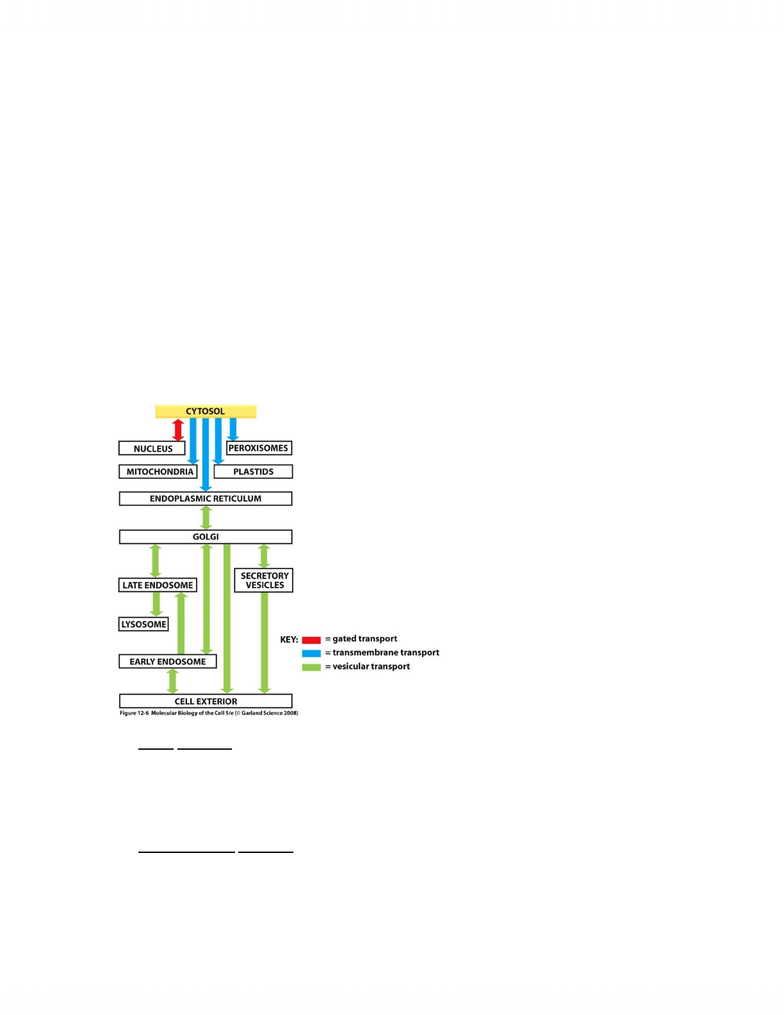  Animation 12-1
- Proteins made in cytosol on free ribosomes: HOW DO YOU GET PROTEINS IN THE ORGANELLES?
 NO SIGNAL= proteins stay in cytosol on free ribosomes
 WITH SIGNAL= proteins are directed to the right organelle
- Proteins are imported with a sorting receptor (on organelles); the sorting signal recognized by
receptor sorting receptor
SORTING SIGNALS
1) Signal sequence: continuous amino acid sequence
- By looking at amino acid sequence we can predict where protein will be imported
- Sequence can be at the end or middle of protein
- Sometimes removed after they are imported
- Usually found at the N terminus but can be at C terminus
2) Signal patch: discontinuous amino acid sequence (not all in one stretch)
- Formed by 3D structure of protein
- Sequence linked by tertiary structure of protein
- Amino acids are separated in linear form but are together when the protein is folded
TYPES OF PROTEIN SORTING (DISTRIBUTION)
1. Gated transport: proteins move between the cytosol and the nucleus (which are topologically
equivalent) through nuclear pore complexes in the nuclear envelope. The nuclear pore
complexes function as selective gates that actively transport specific macromolecules and
macromolecular assemblies, although they also allow free diffusion of smaller molecules
- Uses nuclear pores to get larger molecules in and out of nucleus.
2. Transmembrane transport: transmembrane protein translocators directly transport proteins
across a membrane from the cytosol into a space topologically distinct. The transported protein
molecule usually must unfold to snake through the translocator. The initial transport of selected
proteins from the cytosol into the ER lumen or mitochondria.
Unlock document