Chapter all: Compartmentalizing the Cell 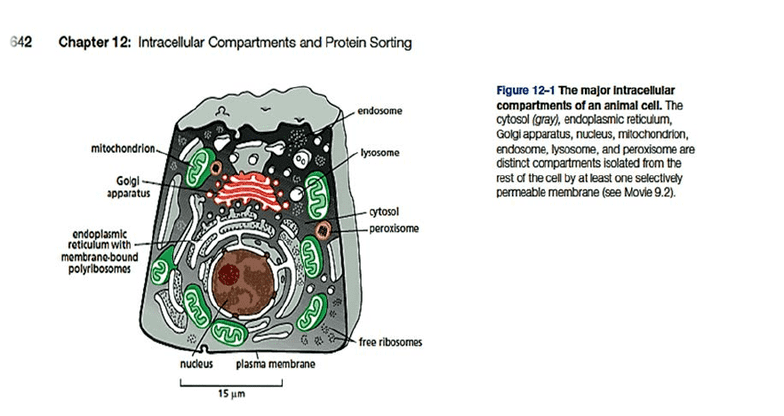 THE COMPARTMENTALIZATION OF CELLS
Eukaryotic cells have organelles, specialized compartments
spatially defined by the membranes surrounding them in the cytoplasm.
Their inner cavity is called lumen.
Each organelle is further defined by sets of specific proteins, and
other molecules that generate its distinctive structure and functions.
Organelles have also a characteristic morphology and location.
All Eukaryote Cells Have the Same Basic Set of Membrane-enclosed
Organelles
The organelles are:
Nucleus: It carries the genome, and it is the major site of DNA and
RNA synthesis.
Cytosol: It is a site of protein synthesis and degradation, and of
intermediary metabolism.
Endoplasmic reticulum (ER): A compartment where protein and lipid
synthesis, as well as Ca++ storage, occur. It directs proteins and
Unlock document

Already have an account? Log in
lipids to the Golgi apparatus. Rough ER refers to ER regions with
attached ribosomes, involved in protein synthesis; ribosomes are not-
membrane enclosed organelles. ER regions with no ribosomes make
up the smooth ER.
Golgi apparatus: It usually consists of tank-like compartments, the
Golgi cisternae. It sends off lipids and proteins to other target
compartments.
Mitochondria and plastids such as chloroplasts (only in plants): They
synthesize ATP’s to drive reactions requiring surplus energy.
Endosomes: Stepping organelles on the way to lysosomes, for
macromolecules and particles put in by endocytosis.
Lysosomes: They enclose degrading enzymes that deal with
intracellular wastes, such as non-operative organelles, as well as
macromolecules and particles stepped in through the endosomes.
Peroxisomes: They store oxidative enzymes.
The membrane-enclosed organelles perform as indicated irrespective
of the cell type they are in. Yet, they vary in abundance and can
show specific properties depending on the cell type.
Evolutionary Origin may Help Explain the Topological Relationships of
Organelles
Unlock document 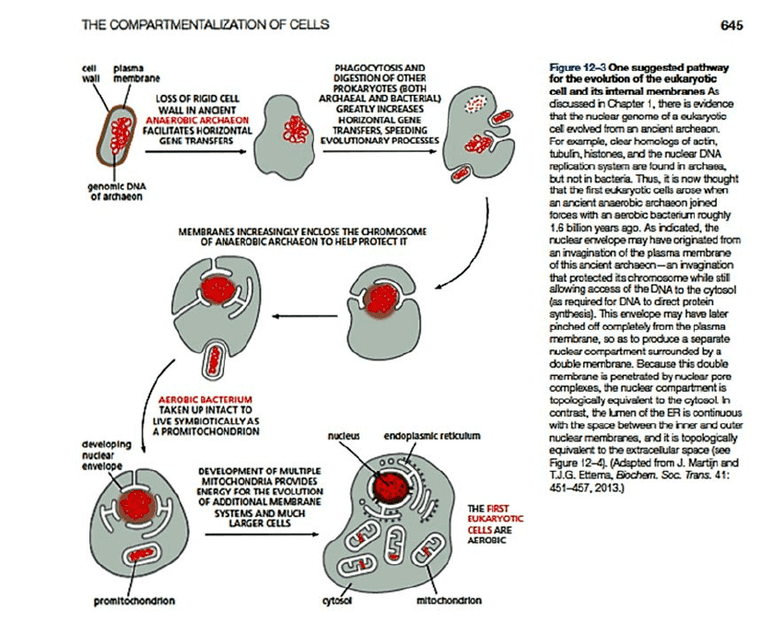 Evolutionary considerations about organelles indicate that they can be
sorted out into four groups according to their origin:
I. The organelles originating by the invagination and pinching off of the
plasma membrane of an ancestral eukaryote cell. This generates
membrane-enclosed organelles with a lumen that is topologically
equivalent to the exterior of the cell:
1. The nucleus and cytosol, with (nuclear) pores communicating
them, thus sharing a common inner space.
2. Organelles involved in secretory and endocytic functions, vz, ER,
Golgi apparatus, endosomes, lysosomes, transport vesicles, and
peroxisomes. Their lumina communicate with each other.
II. Organelles originating from modification of symbiotic bacteria in
the cytoplasm of an ancestral eukaryotic cell. They have a double
membrane envelope. Their inner membrane can be homologated to the
symbiont’s plasma membrane, and their lumina probably derived from
the cytosol of these bacteria. They do not partake in the molecular
traffic between most of organelles in I:
Unlock document